Jamming in the cafeteria is nothing new to this Pierce College band, unforutnetly they are still without a name.

“For our name we want something that has kind of a blues feel…something with trains,” said Beth Nordeen, 33, who plays rhythm guitar.

According to Nordeen, “Trains have kind of a working class feel, and a blues kind of feel,” because she feels they are “something that’s going somewhere.”

This band is definitely going somewhere.

“Our music is a blend of country, pop and rock with a sprinkle of blues,” says Dickerson.

Most recently, Pierce students may have gotten to hear this up and coming band in the open mic that took place on campus.

Students can also be treated to this band simply by hanging out in the cafeteria or out on the lawn.

Their sound is refreshing and original in the clutter of music out today.

Dickerson and Nordeen met last semester when Dickerson was sitting outside of a coffee house with his guitar by his side.

Nordeen walked over and asked if he knew where she could get a tool to fix her guitar.

From there their conversation went to music and their love of blues and country.

They started jamming soon after that and soon brought on Rezvani and Dom to round out their sound.

Their influences range from John Mayer to Jimi Hendrix to Steven Stills.

“It’s the ability to stir passion without words. That’s what lead guitar is about for me. It’s a special kind of communication. A good lead guitar goes right inside you,” Nordeen said.

For Nordeen and Dickerson this comes naturally.

When asked to play a few songs they put their guitars on and started jamming.

Their songs ranged from originals like “That’s What It Takes” and “Galaxy High” to covers of “Wish You Were Here” by Pink Floyd and “UumBop” by Hanson, whom Dickerson also asked me to list under his favorite bands. Their music, which Dickerson primarily writes, is all about taking a sad moment and making it positive.

The main subjects he writes about are relationships, friends and everyday life.

Dickerson started out singing and then after a while decided to pick up a guitar.

He started with three strings and then once he mastered those moved up to four, then five and finally six strings.

Now he’s been playing for four years and is not slowing down any time soon.

Nordeen played guitar when she was younger and even took lessons for a couple of years.

After that she put it down for a long time until about two years ago.

Rezvani says she has been singing forever and recently began playing the piano as well.

Dom plays the piano but also loves to rap.

Throughout the interview Dickerson and Nordeen continuously praised each others talents.

Their chemistry is undeniable and if one of them starts playing something the other can pick it up right away.

During their practice I got to be their shaker which I immediately messed up but they just smiled and continued to play anyway.

They are all about being seriously in love with the music, but not taking everything else so seriously.

Dickerson says his dream gig would be to play at the House of Blues and the Crossroads Festival.

The Roxy or Whiskey would be the places that Nordeen would love to play at.

Their immediate plans for the band are to practice and continue to improve their skills.

Also, they would like to play more coffee shops and open mics.

More songs are in the works and they hope to start recording soon.

For now they love playing every chance they get and are currently looking for a violinist and bassist. 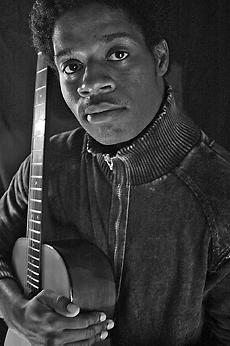 TÈontrÈ Dickerson, is a pierce college student who has his owned band. Although the band still does not have a name, his band mate Beth Nordeen said she is leaning towards a name associated with trains because she feels they are headed somewhere just like their band. Their music consits of cover songs as well as a few of their own with influenced by Blues and Folk music the band hopes to one day make. ()