Indian cinema has been synonymous with Bollywood films.

Their lavish dance scenes and expertly choreographed musical numbers are a caricature of the people they are supposed to represent. But “Slumdog Millionaire” changes the American view of Indian film.

Danny Boyle, director of past award winning films such as “28 Days Later,” “Shallow Grave” and “Trainspotting,” hopes to reel in his biggest fish, the 2009 Oscar, for his latest work. Slumdog is nominated for 10 Academy Awards including Best Picture and it deserves every one of them.

An adaptation of “Q and A,” a 2005 novel by Indian diplomat Vikas Swarup, “Slumdog Millionaire” depicts the tale of Jamal Malik (Dev Patel), a poor “chai-wallah” (tea server) who reaches the final question on India’s version of “Who Wants to Be a Millionaire?”

The film displays a brilliant concept by chronicling Malik’s life story through a series of flashbacks in an effort to explain how he acquired the answers to the questions posed to him on the show.

Handpicked by the director himself, Boyle incorporates young and inexperienced actors. Patel was only 18 and had never acted in a movie before. Boyle’s own daughter suggested Patel for the role of Malik while watching the British television show “Skins,” on which he appeared from 2007-2008.

In addition to gripping viewers with intense depictions of Malik’s past triumphs and hardships he has endured throughout his life, “Slumdog Millionaire” successfully intertwines the subplot of finding lost love by re-introducing Malik’s love interest, Latika, throughout the entire film.

Slumdog Millionaire excels in evoking every emotion of the human psyche and is a must-see for the emotional thrill-seeker. 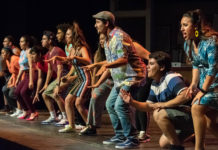 ‘In the Heights’ does it right 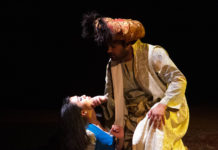