When the Twin Towers fell, Juan Pablo Sirri packed up a bag and was ready to go to New York to volunteer in any way he could.

Unfortunately for him, his mother refused when he tried to leave. He was 14.

“I don’t want to say that Sept. 11 made me want to join the Marines, but it definitely had an impact,” said Sirri, now 23.

Sirri is everything you would imagine a Marine to be: broad-shouldered and

subtly authoritative, sporting a large tattoo on his arm and closely chopped hair.

And yet he is quick to joke and speaks thoughtfully, giving off a sense of calm that could put you at ease with him in either a classroom and a combat zone.

Sirri is the president of the newly formed Student Veterans Organization (SVO), a club that works alongside the

Financial Aid, Scholarships and Veterans office to provide for the 738 veterans currently registered on the Pierce College campus.

“We’re here to walk them [the veterans] through the process of transitioning into civilian life,” said Sirri.

Sirri, who joined the Marine Corps in 2005 after graduating from Birmingham High School in Lake Balboa, was deployed to Iraq in March 2009.

“Going to Iraq for the first time, no matter what anyone will say, was a life-changing experience,” said Sirri, a San Fernando Valley native.

A Marine Corporal and mortar man, Sirri was stationed in the Al Anbar Province, Iraq’s largest province. He served as a Mine Resistant Ambush Protected Vehicle (MRAPV) driver and did personal security in his five months there.

Sirri remembers lots of close calls and scary nights, but one incident sticks out.

He recalls a time when he and his convoy was driving back to base and everything looked “pretty normal.” They were pretty close to home,  he remembers being maybe miles away.

Suddenly, a white Mercedes Benz appeared, with headlights on during the daytime appeared, which according to Sirri, was odd.

The car was gunning the engine and was on the wrong side of the road. Sirri remembers honking, trying to alert him. He got on the radio to his gunner and said to take aim, and to shoot if the car got too close.

Luckily, a couple seconds before they would have had to fire, the car moved and just kept going like nothing happened.

Sirri was in Iraq from March 2009 until November 2009, right in the middle of SOFA Act, during which time Iraq was being handed over to the Iraqi’s.

In his time there, he said he learned a lot about himself, but also a lot of history of the region.

“If Iraq ever becomes a stable environment, I’d probably just want to go back there and just check it out,” said Sirri.

Now in the reserves, Sirri splits his time between Pierce and working for the Department of Justice. Sirri’s main priority is to help veterans like himself, both now and after he graduates.

He is majoring in psychology with an interest in behavioral analysis, because he’s always been interested in “what motivated people to do that things that they do.”

Because of his interest in psychology, Sirri is paying attention to the growing problem of Post-Traumatic Stress Disorder (PTSD) when working with veterans. Sirri knows one in five veterans who had suffers from PTSD, and he himself saw a therapist upon his return.

When he came home from Iraq, his family threw a big BBQ for him with all of his family and friends. He was only able to stay for five minutes before extreme anxiety took over him. He spent the rest of the night in his room.

Sirri said that along with PTSD, many veterans suffer from memory less and ringing in the ears from the constant sounds of bombs going off and guns being fired at close range. All veterans are afforded five years of free medical treatment, which includes counseling services.

While the war has by far affected the soldiers the most, it also affects their families.

Oborn became involved in the SVO because of her son, also a Marine veteran and now a Pierce student. He needed to get some paper work and the “Three Musketeers,” as Oborn calls Sirri, Sorbello and Huettinger, asked if she could sit in on one of their meetings.

Oborn has a long history at Pierce, first attending as a student and then a campus police officer, before serving as dean of student services for eight years starting in 1996 and finally as a professor for the last eight years.

Her son joined the military pre-9/11 and she remembers how methodical she and her husband were about determining whether he’d be safe.

Oborn’s son was already on his tour of duty overseas and he was part of the first wave of troops into Fallujah, Iraq.

“It was very painful,” said Oborn. “Obviously, it was worse for him, but it was still so difficult wondering.”

Oborn used a website to track patterns in the day’s casualties, looking for Marines and then members in her sons unit. She said there were a few times when she would see members of her son’s unit on the list and would wait for days to hear back from him.

“We had very limited conversations,” she said. “Sometimes we weren’t able to reach him at all. That was scary.”

Oborn said that her son, who doesn’t want to be identified in this story, and that he doesn’t talk about his time in Iraq.

“I believe the most important issue is trying to adapt to what we know as ‘civilian’ life,” said Lopez, 23, a child development major. “Many sailors, soldiers and Marines spend years fighting in combat, with the same service members that become family. Coming back to the United States or ‘real’ world, is so different. It’s like culture shock that can greatly affect service members.”

To combat these issues, the SVO’s ultimate goal in the near future is to get a so called Veteran’s Center on campus.

According to Sirri, the center would include a common area for veterans to hang out and do work, complete with computers and TVs, as well as academic and financial aid counselors who are specifically for veterans.

“It’s in the works, slowly but surely,” said Sirri. “We want to see more support.”

Oborn agreed that there needs to be a place veterans can go, a “one-stop shop” as she called it. In the mean time, the club is trying to organize more activities for the veterans and their families, such as bowling or BBQ’s.

The SVO will be holding a BBQ today from 11 a.m. to 2 p.m in the Great Hall to honor tomorrow being Veteran’s Day and raise community awareness about veterans at Pierce.

“They fought for us,” said Sirri. “And now we’re gonna fight for them.” 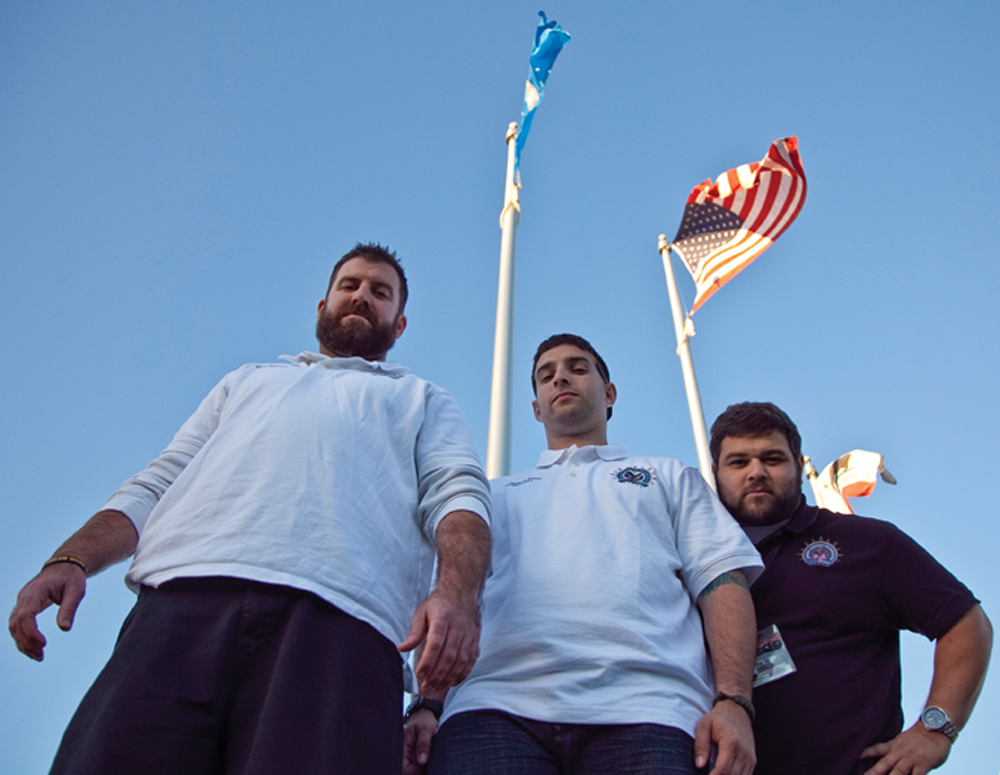 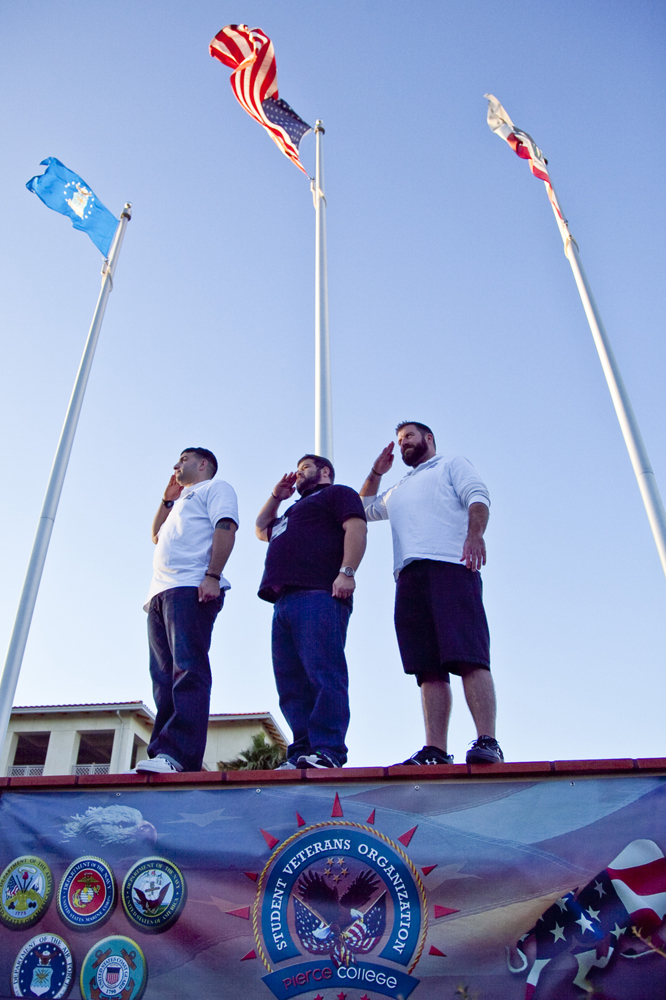 Sirri, Sorbello, and Huettinger salute the American, California and Army flags now hosited on the flag poles on the Mall with their Student Veteran?s Organization banner. (UD / Roundup)

Application deadlines for six University of California (UC) and California State University (CSU) campuses have been extended past the Nov. 30 deadline, according to...
Read more
News

CalWORKS joins the season of giving

College can be difficult for anyone, but it can be especially challenging for students with children.  CalWORKS is a state-funded program that provides financial assistance...
Read more
MORE STORIES