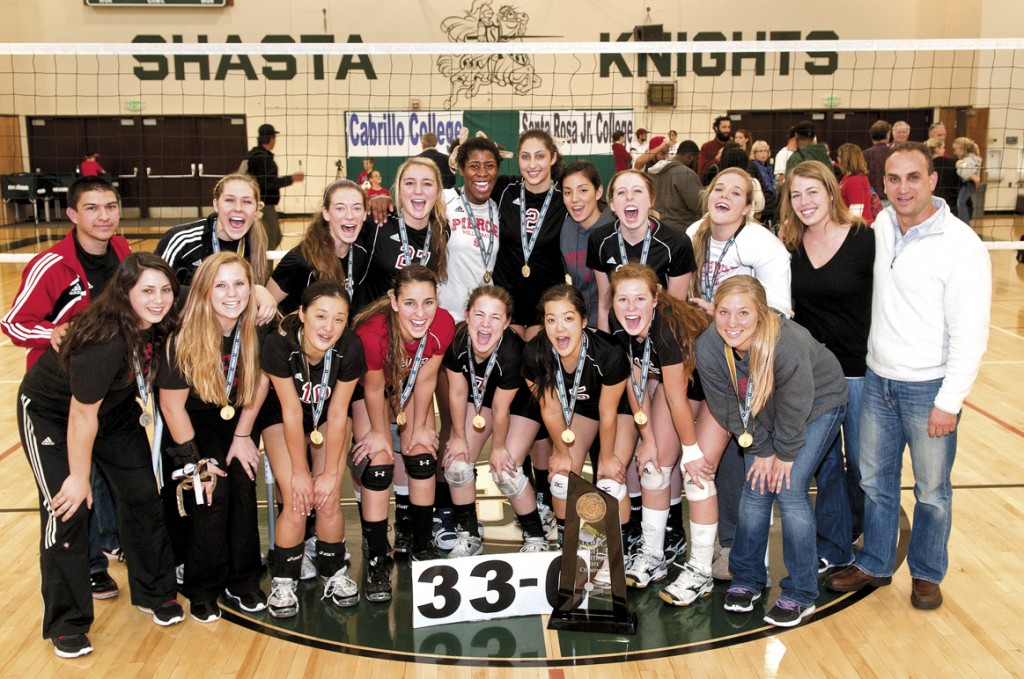 After facing elimination not once, but several times in two matches during the weekend, the Pierce College women’s volleyball team came out on top to capture back to back state championships.

Despite losing key players like team captain and aces state leader Kathleen Wright before playoffs and sophomore Shayna Guitare in the middle of the season both to ACL injuries, the Brahmas showed their toughness to overcome the challenge and regain their title.

“It means a lot to me personally, to the program more than anything, and it means a lot to the sophomores who basically have something to talk about for the rest of their lives,” said Brahmas’ head coach Nabil Mardini. “It’s quite an accomplishment for them to win two state championships in a row, not a lot of people can say that, so the feeling is very ecstatic.”

The Brahmas became the first team to win back to back state titles since El Camino in 2007 and 2008, and the first to complete an undefeated season since Orange Coast did in 2005.

Pierce faced elimination in two matches during the state championship tournament when they were down to Santa Rosa and El Camino 1-2 and 0-2 respectively, but managed to keep it together and come out victorious.

“People have to understand that we had two starters that weren’t playing,” said Pierce College Athletic Director Bob Lofrano. “Shayna and Kathleen blew their knees out, and you only play six at the time so we had 33% of our starting unit on the bench, and we were still beating this guys.”

Several serving and defensive mistakes made by the Brahmas let El Camino take a commanding 0-2 lead in the winners’ bracket game on Saturday.

Pierce won the next three sets, however, thanks in part to 2011 tournament MVP Danetta Boykin who managed to contribute with 62 kills over the weekend, 21 in this game, and the experience of Veronika Ban who in the absence of Kathleen Wright was the natural team leader.

Ban had 12 kills, eight blocks, and 12 digs during this match while freshman Sakurako Fujii also spiked 12 kills but had 7 digs.

“We weren’t playing as a team as much as we could have [played], and Veronika Ban helping put us back together,” said freshman Jessica Burns. “She played last year in the championship game so having her on the court helped us keep calm and come back together as a whole.”

The Brahmas’ carried their momentum from those come-from-behind wins to sweep Santa Rosa in the state championship match in three straight sets (25-19, 25-21, 26-24), dishing out the only sweep of the final tournament.

Ban had another solid performance, not only spiking the title-clinching kill, but she also pounded nine kills, had 11 digs, three blocks, and two aces.

Boykin contributed with a game-high 18 kills while Fujii added 12 without an error, and Jasmine Levi had a total of eight kills and six blocks.

Setter Janelle Futch dished 47 assist to add to her 144 assist total during the weekend.

“Even more than being champions is the fact that we were 33-0, coming off a season where you were the state champs everyone wants to beat you,” said Lofrano. “But the one thing that made them champions was not as much their ability but their inner strength, their mental toughness, they were down 2-1 on Friday and 2-0 on Saturday playing poorly, but then, we get to the final and blew them out in three straight.”

The Pierce women’s volleyball program, under head coach Nabil Mardini’s hand have won their conference and advanced to the playoffs 10 out of their last 11 seasons, have gotten to the final four a total of four times, and have won the state championship twice.

“It’s good for the school, everyone should put out their chest a little further and be proud of the fact that they’re at Pierce, that these are our kids, our students, they represent us, the community of Woodland Hills,” said Lofrano. “This isn’t Rhode Island, this is California and 85 teams play women’s volleyball so its something to be really proud of.”