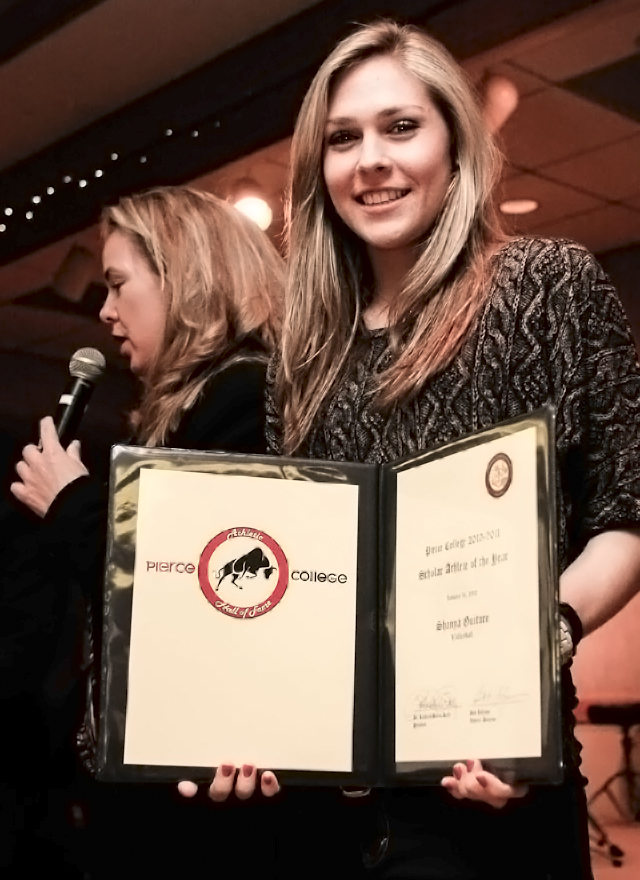 Pierce College will become the home to a new women’s Water Polo team in the fall semester of 2012 according to Athletic Director Bob Lofrano.

The announcement was made as the Pierce College athletic department hosted their 2012 Hall of Fame induction ceremony.

Twelve Brahmas’ from different times, young and old were gathered by Lofrano and Barbara Anderson, Dean of, to celebrate current and former Brahma stars.

“This is a night for honoring who we are, so with the help of Barbara [Anderson] and Doreen Clay [Pierce College Public Relations Manager] we put this together and did some great stuff,” said Lofrano. “We had old and new and young and all the Brahma greats.”

The day started with a golf tournament among Pierce representatives and future inductees at 11 a.m., followed by dinner at one of the country club’s salons.

The induction ceremony started at 7 p.m. with Lofrano presenting the Pierce team’s current and former coaches who helped introduce each inductee

Before the inductions women’s volleyball head coach Nabil Mardini and part of his 2011 state championship team were congratulated on stage.

“It’s huge honor, two years ago when they started the Hall of Fame i thought it was a wonderful thing to bring everybody back together,” said Swimming coach Fred Shaw. “And luckily we had a swimmer who was inducted this time around, it was thrilling and I’m glad to be a part of it.”

Among the inductees present were former Major League Baseball pitcher Steve Reed, who attended Pierce in 1984. He played for seven different Major League teams and is currently 37th on the all-time list for number of games pitched in Major League history with 834.

Former all-American quarterback at Pierce in 1960 Hal Bedsole who played for the 1984 10-0 football team, former volleyball star and current University of Arizona women’s volleyball head coach Dave Rubio, swimmer Xan Rogers who in 2006 broke four Pierce swimming records, and former soccer star Elia Petrosian who was the first player in Western State Conference history to be named back-to-back Player of the Year, were all present at the induction ceremony.

“It totally sums up my life now I’m so excited,” said Petrosian. “It is a big deal to accomplish something like this.”

Among the inductees not present at the ceremony were current Major League Baseball player and 2007 World Champion with the Boston Red Sox Covelli “Coco” Crisp, two-time Superbowl champion with the Pittsburgh Steelers Jimmy Allen who played at Pierce 1970-1971, and former baseball and football coach at Pierce from 1966-1982 Joe Kelly.

“All the people that helped me out to get here gave me everything I needed to get me where I am today,” said Petrosian. “It [Pierce] definitely showed me that just because you don’t get into a four-year [University] doesn’t mean your life is over, doesn’t mean that there is no place that’s better for you to help you better yourself in any other way.”

Former swimmer Xan Rogers felt overjoyed at being at the ceremony and explained how Pierce changed her and how swimming coach Fred Shaw helped her find her way in school.

“It feels really good, it’s a great accomplishment,” said Rogers. “I had an injury in high school and it was very devastating to me so I had to stop, by the time I was getting back in, realizing I wanted to swim in school I found Pierce, and finding Fred made me see where I wanted to be.”

“I’ve done it [Hall of Fame ceremony] before so you just work at it, its kind of on your mind, had a couple of sleepless nights just thinking about it, you know its going to be great, you just have to set up everything and let it happen,” Lofrano said.