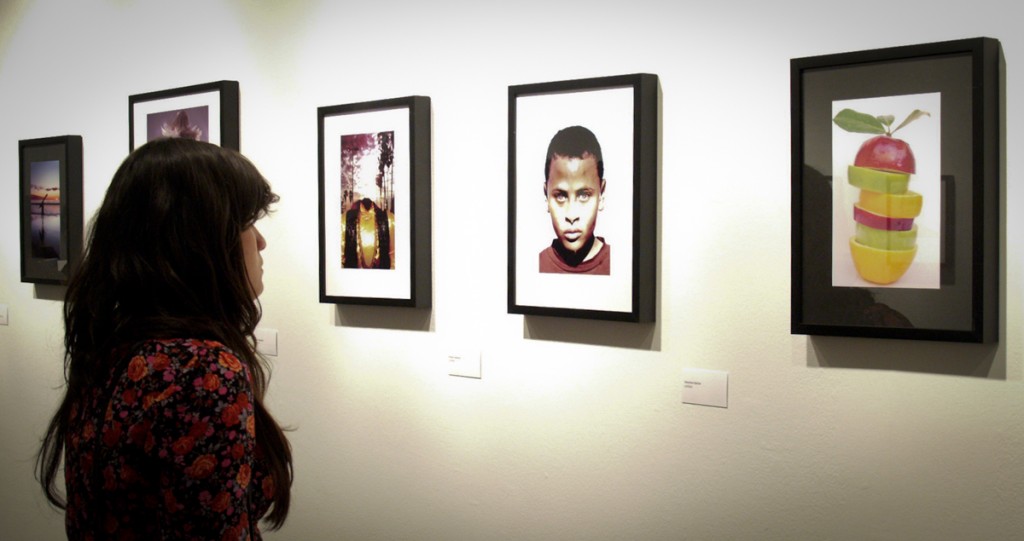 It had only been two minutes since the official opening of the Pierce College Photo Salon Feb. 23, but the Art Gallery was already full of people.

Photographers and photo lovers alike mingled and enjoyed refreshments under a starless night outside Art 3301 during the opening reception, while others gathered inside admiring the works of art.

The 29 photographs that adorn the otherwise white walls of the gallery will be on display until March 23, and will be open Monday through Thursday from 2 to 7 p.m.

The photos varied from stop motion, scenery, profiles, and still life, just to name a few.

All of the photos were submitted by Media Arts students at Pierce and are competing to win prizes during the first annual closing reception on March 7.

Erin Stone, an award-winning photographer whose work has been featured in the Pierce Bull magazine, took in the event humbly.

“It is an honor…it is very nice to see people enjoying what you put your heart into,” Stone said.

Stone’s pieces that are on display are called: “Metamorphosis,” “Floating Man” and “Man”.

“I never thought I would like that, it’s just dirt,” Pinedo said.

Levitt’s photo is a landscape photo of a volcano in Maui.

Polish born photographer Agata Dziatlowicz stood quietly admiring the work that was displayed on the walls.

From her composure one would never guess the excitement that awaited her when she discovered not one, but two, of her photographs had been selected for the gallery.

She is most proud of her photo entitled “Dancer,” in which she used the blur technique to portray the motion of a flamenco dancer.

“I have been waiting to take this picture for two years, but I was always scared,” Dziatlowicz said.

She credits Professor Sean McDonald, instructional assistant of Media Arts, for pushing her to experiment due to an assignment she had in his class.

Jill Connelly, chair for the Media Arts Department, was also at the opening.

“I think it’s a really great experience for the students,” Connelly said.

To learn more about the Pierce Art Gallery at http://www.piercecollege.edu/departments/art_architecture/gallery.asp

Crowd gathers to protest in the San Fernando Valley