“I woke up at 5 o’clock and my mom would drop me off at a bus stop and I would take three busses there, three busses back,” said Psychology major Centeera Plummer, recalling the time she commuted to Beverly Hills for school. “I was a kinesiology major last semester but then I took a chemistry class and I didn’t pass it, so that made me change my major. I’ve always been interested in psychology and didn’t know I could major in it to do what I wanted to do, which is occupational therapy.” 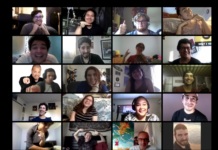 Hope in the midst of a crisis