Pierce and Grossmont College women’s volleyball clashed in a battle between two of community college’s powerhouses. The game needed five sets to claim a victor.

Ultimately, Grossmont’s superior serving ability proved to be the deciding factor as they came out on top at Pierce, 25-16, 25-13, and 15-12, to give The Brahmas their first loss on the season.

“We haven’t seen a team that can serve that tough so that was a difference,” Pierce coach Nabil Mardini said.

Both teams were neck and neck the entire game.

Grossmont coach Jamie Ivers, said her team began with a slow start to the season, but she is glad to see her players bring out what they have been practicing onto the court.

“I think us being smart and being able to maximize our offense with discipline was huge,” Ivers said.

Mardini said, his team played a good match and the result could’ve gone either way.

“It’s a loss but it’s only the beginning of the year, we can’t dwell on it. It just means we need to get better,” Mardini said.

Grossmont players showed consistency throughout the first set earning point after point. Mardini called two timeouts to speak to his players during the first set.

Moreover, Grossmont took the win for the first set with a score of 25-16. Pierce then made a comeback and won the second and third set 25-21 and 25-9.

While Grossmont struggled to get the ball over a couple times in the second and third set, they quickly adjusted and picked up where they left off and conquered the fourth set winning at 25-23.

Grossmont was aggressive throughout the game and played with high energy. The team also maintained and established dominance when having a lead. Mardini thinks Grossmont did a good job at adding pressure on the serving line in tonight’s game.

“I think we struggled a little bit in serving and passing,” Mardini said.

The 5th set began with Pierce in the lead at the score of 3-1. It did not take long for Grossmont to come right back and leave tie the score at seven. Pierce would come back to take a 12-10 lead.

However, Pierce would fail to score the rest of the set.

Pierce opposite hitter Whitley Doss, who had 11 kills, also credited Grossmont’s serving ability as an advantage over them.

This was Pierce’s second game of the day after defeating LA Mission College earlier at 1 p.m. 3-0.
On Friday, September 9, Pierce College will play at the San Diego Messa Tournament at 4 p.m. 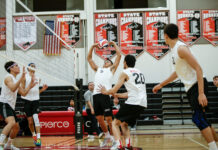 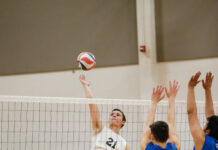