A call to end catcalling 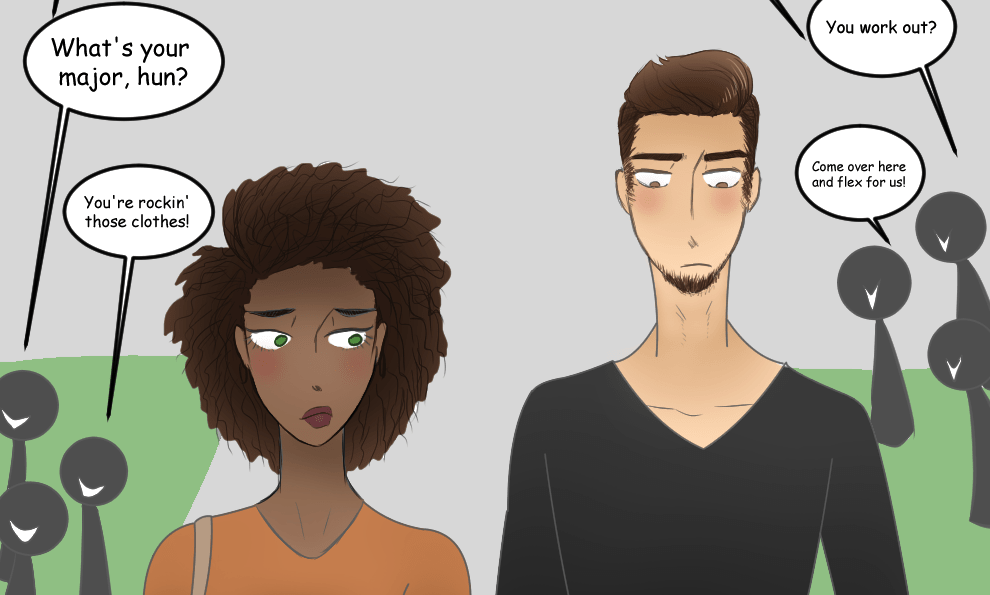 In the 2016-17 school year, Pierce College had 20,618 enrolled students. 11,260 of those students were women. According to a Penn Schoen and Berland Associates survey, 87 percent of American women between the ages of 18 and 64 reported at least one experience with street harassment.

If those two statistics are combined, that would mean that 9,796 female students at Pierce College might have experienced some form of street harassment, but even half that number is too much.

In addition, according to a national report released by non-profit advocacy group Stop Street Harassment,  25 percent of men, in particular those who identify as members of LGBTQ, experienced street harassment.

Because catcalling affects a significant portion of Pierce’s students, administrators have a responsibility to help combat it.

One way to bring attention to the issue would be to specifically include catcalling as unacceptable behavior in Pierce’s code of conduct. Not only should this be in writing, there should be written repercussions for the violators. Instigators of catcalling have no fear of consequence, allowing this behavior to continue. By creating rules and punishments against street harassment, catcallers might think twice about partaking in this behavior.

Street harassment, or “catcalling”, is mostly defined as people, typically strangers, who attempt to get someone’s attention by making sexually explicit and inappropriate comments and/or gestures.

Forms of street harassment include unwanted whistling, leering, sexist, homophobic and transphobic slurs, persistent sexual or romantic advances, constant requests for personal information like name, address, and phone number, even after the victim refuses, comments and demands, often about the person’s body and physical appearance, following, flashing and groping.

In many cases, catcalling leaves people who experience it feeling used, violated and helpless.

According to a study conducted by Cornell University, street harassment “evokes strong reactions of anger, fear, and anxiety.” The study also found that people who had experienced street harassment, developed long-term damage to their mental health, such as low self-esteem and depression.

In addition to enforcing rules against offenders, there should be a network to support students who have experienced harassment. As a frequent host of workshops, Pierce could have a workshop that allows students to gather and talk about their experiences, but also teaches ways to identity street harassment and how to deal with it. Having workshops on GoDays, could help incoming freshmen identify, combat, and respond to street harassment, and it could also help prevent this behavior from happening and help those who’ve experienced it.

It’s also important to note that many people don’t really know what street harassment is to begin with. According to a YouGov poll, 20 percent of Americans believe catcalls are “complements,” and 24 percent are not sure whether catcalling is a compliment or not. Also, when asked when it is OK to catcall somebody, 22 percent of American men said “always” or “sometimes.” Educating students on how to identify street harassment is a good way to stop it from happening.

When faced with catcalling, targets might not know what actions or precautions to take.

Safety should be prioritized when combating street harassment. Learning how to identify and keep students safe in the face of harassment could benefit many. Workshops on the subject could include tips for dealing with regular catcalling and also incorporate lessons that teach students about their rights. Should they report repeat experiences to the Sheriff’s Department? Are there any actions they can take? If a situation escalates, should they defend themselves and could they get in trouble for doing so? What is catcalling, anyway?

Catcalling and street harassment is a real issue that thousands of people deal with on a daily basis. Not only is it hurtful, but it is damaging and potentially dangerous if it escalates. Answering all these questions and more, could bring comfort and peace of mind to students and could also bring more visibility to the issue, perhaps inspiring instigators to identify and stop such behavior.

The Roundup News
The Roundup is the student-run news outlet at Pierce College in Woodland Hills, Calif.
Previous articleSoccer team reacts to US missing the World Cup
Next articlePro: Costume my classmates