As they head off another home game on the evening of Nov. 10, the crowd awaited to see an intense game that held everyone to their seats.

This wasn’t just another game but the girls’ volleyball team takes their team effort very seriously. They don’t win by luck, but rather by being each other’s support.

As the season gets more intense, they are still in the lead by taking this game over the top. They won by more than half resulting in a 30-14 score. Every game is always a chance to move up and they aren’t letting any slip ups occur.

With seven veteran players and 10 new players, this team is being well motivated by the influence that the veterans have on them.

They are there not only to help structure the teams’ plays but also to leave behind a better trained team when the time comes to leave.

“It makes a difference when you have team veterans because they are able to help with the teams’ new players as well as helping them keep their performance up,” said Nabil Mardini, Head Coach.

The team has won the Western State Conference for the past 5 years now and their performance this season is molding into another possible winning.

The teams’ enthusiasm is an important factor because it helps them communicate at a powerful level that shapes the team that they are today. 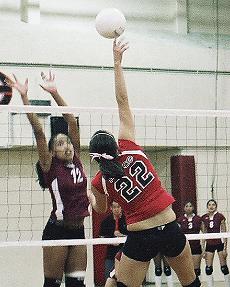