To say that the Pierce College football team had a tough season would be an understatement.

With only one win (the rest losses), the players have been plagued with a number of problems off the field, which likely contributed to their performance on it.

Enter Kevin Moore, the team’s defensive coordinator two years ago. He was hired in March to try and fix the problem for Fall 2006.

Though he had 10 years experience at the high school level, this was his first time as a college head coach.

However, he was hired late in the off-season as a part-time coach, whereas other colleges offer full-time positions.

Throw a series of unfortunate events into the mix for good measure-like a fatal seizure, a domestic violence charge and gunshot victims-and any hope of a successful season was quickly trampled.

Though Moore and his coaching staff put together a brand-new team, many of the athletes they brought in to improve the quality of play were from other states.

This was again due to the late start.

As a result, he had to “find players from wherever he could,” said Athletic Director Bob Lyons.

But hiring a walk-on coach in March does not allow much time to prepare a decent football team, which can be a year-round process.

Given the depth and scope that is demanded when starting from scratch, it would have been better to hire someone full-time.

No one after all, was under false assumptions that positive results would be immediate, considering the time it takes to build and refine a group of individuals into a single performing unit.

Some of the Pierce out-of-state players initially slept in a church and then moved into a house with cramped quarters.

This certainly didn’t help the rebuilding process, or the morale of the team.

It definitely didn’t add luster to the school’s rep, either.

One can only wonder how they have been describing their experience to their relatives and friends back home.

It can’t be pretty.

There’s no finger-pointing in this particular situation because all parties are to blame.

Players should have voiced any concerns they may have had at the start of the season, if not to Moore, then to a Pierce administrator.

The coaching staff should have taken better care of its athletes.

It’s apparent that miscommunication occurred on both sides. However, Moore should have made it clear to students from other states, that they would be responsible for looking after themselves once they arrived to California.

Last, and certainly not least, the administration should have been on top of things by delegating the responsibilities in a more realistic manner.

That means doing all the necessary hiring on time and making sure that proper resources are available.

Community college football, at its best, is a complex matter.

The fans are few, but players trying to qualify academically to attend a four-year school are many.

Add to this an unusual mix of circumstances: Pierce, in the midst of trying to get the program back on its feet this year; and a brand-new head coach who found himself responsible for the lives of 80-plus players when he should be worrying about the game plan.

One ends up with a school that needs to seriously review and assess its football program.

Just how valuable is football to the athletics department?

Is there need for a sport already filled with community college teams vying for top talent?

What is the goal?

How does it serve Pierce as a whole, and how great is the benefit to its players?

In an athletics program boasting league and regional championships in volleyball and soccer, is a squad with a long history of losing, deserving of so much time, energy and resources?

Maybe it’s time to focus our sights elsewhere and break ranks with tradition.

Nevertheless, if football is to continue next year (and it looks like it is), the college needs to seriously ask itself if it’s prepared to make the necessary investment in:

? a coaching staff that includes at least one full-timer.

? academic orientation and support for athletes.

? the social aspects of fielding a football team whether it be proper planning for a REAL homecoming game and ceremony.

? developing a proper fan base.

Athletics play an important role in the workings of any academic institution.

They draw publicity to the campus via students as well as the surrounding community, all the while increasing school spirit.

Perhaps it’s time to head back to basics.

A saying that seems fitting for the Brahmas football team would be, “If you build it, they will come.” 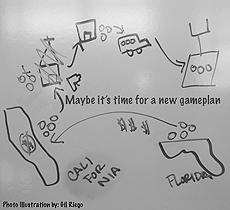