Since the threat of climate change was discovered, the topic has traversed the globe among intellectual circles and members of college campuses alike.

From Al Gore’s popular documentary, “An Inconvenient Truth” to the recent Presidential election, the talk about saving the planet has captured the world’s attention.

So it is of no surprise that the conversation found itself on the steps of the Great Hall Friday, where Woodrow W. Clark II spoke to a crowd about the growing threat of climate change and the Los Angeles Community College District’s plan to reduce its footprint on the environment.

Clark, the former energy director of the LACCD and co-recipient of a Nobel Peace Prize for his work on the Intergovernmental Panel on Climate Change, is no stranger to the problems facing the world.

According to Clark, gasoline and oil will peak by 2020, leaving the world in a dangerous conundrum. In the lecture, Clark cautioned that Los Angeles should address the problem sooner than later.

“…We have to get ourselves into mass transit, we have to get out of our cars and use transportation that uses less fuel and less energy,” Clark said to a crowd that packed the Great Hall.

Despite the depleting sources of energy, Clark believes there are a plethora of alternative energy sources. According to Clark, these energy resources include solar, biomass and wind power.

However, Clark believes the United States has been slow to adapt these changes, such as wind energy, which is hard to harvest in North America.

“If you go to Northern Europe, you’ll find wind offshore, but you won’t find that in the U.S. There is controversy that there is no viable wind power near the coasts, other than Texas,” he explained.

Without a proper response to these problems, Clark claims there will be dire consequences. There is more extreme weather occurring in the U.S., including tornadoes, which are more commonplace today than in the past five years.

Clark also claims that one-third of Florida will be under water in the next 10 years, according to his findings.

While these forecasts are unnerving, he still believes there is a “third industrial revolution” involving green technology beginning to gain ground.

The LACCD can be part of that revolution by providing proper education and developing alternative energy platforms to power utilities.

“There are always opportunities for employment in green technologies…there is a large difficulty in finding qualified applicants in many parts of renewable energies,” Clark said.

He also believes there is even more development ready for the Pierce College campus.

“We may see some wind turbines at Pierce,” he said, while flanked by a picture of roof mounted wind turbines. Clark believes the various LACCD campuses could use different  types of renewable energies to power their utilities.

Clark seems hopeful the LACCD campuses are leading with their efforts to create a green environment.

“I think we’re leading the charge , I really do…79 percent of the voters agreed with this type of change in Proposition J,” he said. 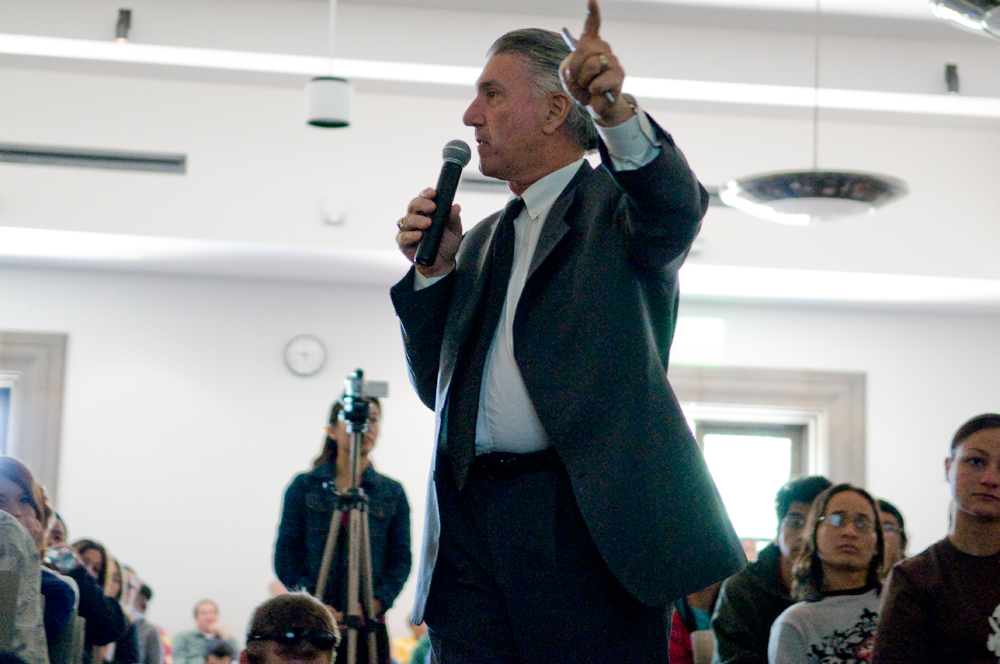 Nobel Peace Prize recipient, Woodrow Clark ll, MA3, PhD. speaks on how the Los Angeles Community College District is going green and special projects being developed in other countries that can be adapted in the United States, in the Great Hall of the Student Community Center Thursday morning at his lecture, “Green Sustainable Campuses.” (Aisha Ahal / Roundup)