A hot day, a community park, fresh food and local residents, is what a typical Sunday is like for those who participate in Food Not Bombs at Reseda park in Reseda, California.

Food Not Bombs, FNB, is a nationwide campaign to bring awareness to citizens that our government spends a lot of money on war and nuclear firearms and don’t recognize that there are still people starving in this country.

By taking a stand, every Sunday a group of volunteers meet at the Encino Farmers Market to collect all the donated left over fresh produce, stop at Western Bagel to collect bagels that would normally get thrown away, and take all the food to an apartment to cook a warm homemade stir fry.

After all the preparation, the vegan friendly food is transported to the park where people of the community gather to collect plenty of the free and fresh meal.

Some of the many nutritious foods that were generously provided include apricots, cauliflower, corn, vegetable juice, veggie bowls, and strawberries. The fresh produce is all lined up in boxes along the grass as people gather to fill up their bags.

Hannah Bower, a former Pierce College student who transferred to University of California Los Angeles, is one of the volunteers at FNB.

“A lot of food is wasted and it is true people need it,” Bower said. “We are growing up in a culture where instead of fixing old things we buy new things.”

The same goes for food. People throw away the old leftovers even though it has not gone rotten and those who are less fortunate do not get the chance to eat.

Although FNB is giving back to the community and helping those around them, they are not a charity.

“We are solidarity,” Bower said. “It’s all about forming relationships.”

Everyone is accepted who show up each Sunday at the park. It’s not just for those in need. It is for anyone within the community; Reseda consists of a mixed group of people, according to Bower.

FNB caters to all sorts of people with different backgrounds.

Some are local residents who don’t have jobs like Damia Fersrane.

Others community members are college students like Justino Garcia, a Pierce student.

“I have been coming here every Sunday for the past 2 months,” Garcia said. “They make great food. Every week I have a bagel with stir fry vegetables.”

Garcia learned about the FNB movement through a volunteer at a charity he used to run. He decided to look into what the group had to offer and is always amazed with the results.

As he looked at some of the members putting out the food, he seemed so moved and awestruck.

“Beautiful,” he said. “It’s just so beautiful. Not only for the food [they prepare], but you just don’t see things like this every day.”

Although Garcia is not a vegetarian, he is very grateful for the food that is prepared every weekend.

“I love meat, but I love their vegan food,” he said.

As Garcia made his rounds and gathered food, he greeted one of the members who has became a good friend, Rajani Elek, a graduate of California State University, Northridge.

Elek enjoys being a member of the group, and has offered her apartment as a place for FNB volunteers to come cook and prepare the meals every week.

“We used to go back and forth in between houses to prepare the food but now we use my apartment,” she said. “We have people come back because they’re so gracious and they take our food and make different things with them.”

Elek enjoys how people use the vegetables and fruits they provide to make jams and other dishes for their meals.

“I’ve always enjoyed helping people,” Elek said. “I’ve always wanted to be active in my community. I feel like we’re actually doing something, not just protesting or waiting around to be heard.”

To learn more, visit their MySpace page at www.myspace.com/sfvfoodnotbombs 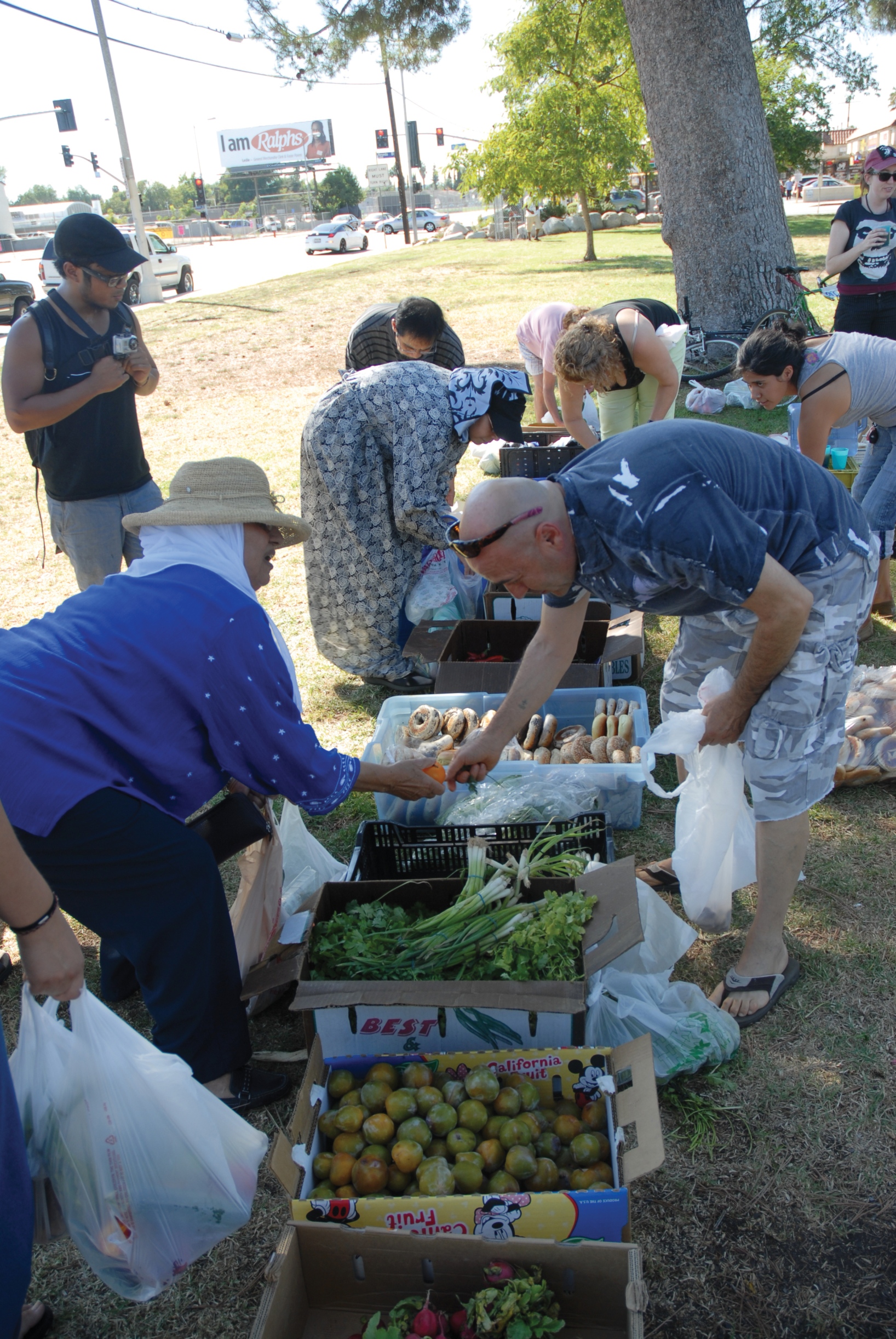 Some local community members of Reseda, Calif. go to Reseda Park on Sunday afternoons between 3 and 5 p.m. to get free vegan food sponsored by the Food Not Bombs organization. (David Schub)

Column: Letter from an essential worker