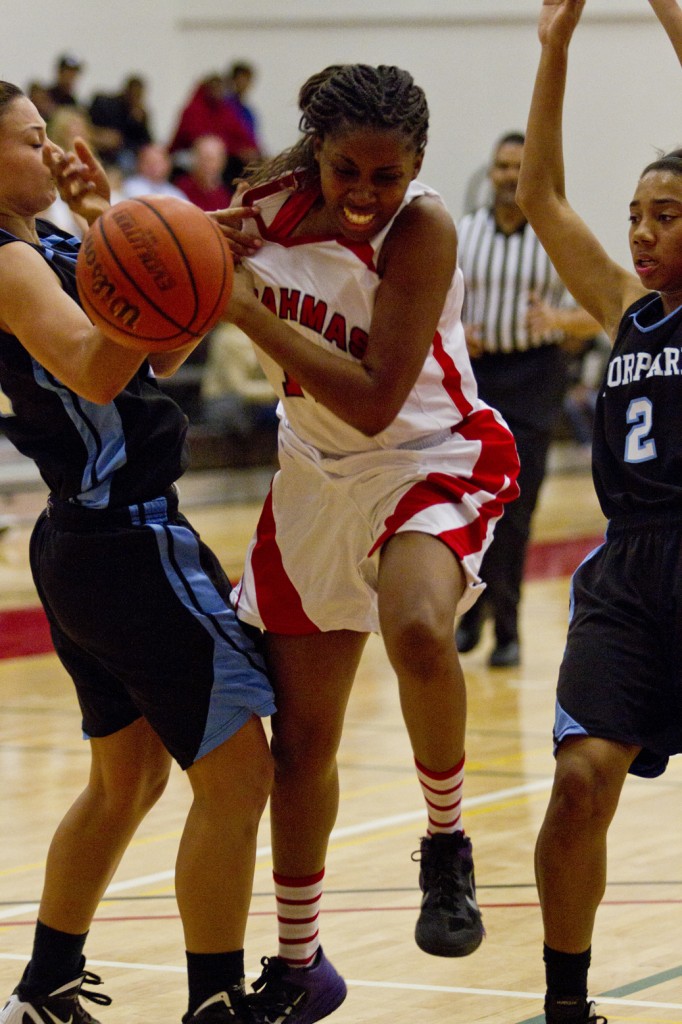 Los Angeles Pierce College Brahmas women’s basketball forward, Skyy Lewis (12), fights for the ball as Moorpark College Raiders defend against her Wednesday, February 8, 2012. The Brahmas went on to loose by only two points with the final score being 60-62. Photo by: Angela Tafoya

The game was played at Pierce College and it ended with a score of 62-60 in favor of the Raiders.

Pierce center Kameron Jones who finished with 28 points talked about the tough loss and going forward to the next game.

“We did a lot of good things, a lot of things worked but we got to work on our weaknesses and try to get the ball to our strong points so we can get ahead and capitalize at the beginning of the game instead of having to fight through the whole game,“ said Jones. “When we do get ahead we have to hold it instead of letting the team come back and win against us.”

The Brahmas came out and started the game strong with a 10-4 early lead, but turnovers let Moorpark back in the game and led to Pierce being down by five at halftime.

The start of the second half was dominated by Moorpark and they made a run to too add on to there lead coming out strong.

Freshman center Kameron Jones took over the game, the Brahmas turned up the intensity to get back in it and came back to tie the score at 49.

Moorpark escaped with a tough win on the road in a big conference game.

“I thought Pierce played very well, its good for us to be in these types of situations and types of games, it shows resilience for us and I’m happy just for our effort and that we played all the way to the end,“ said Moorpark women’s basketball head coach Lindsay Goldblatt.

After the game Pierce assistant coach Ralph Wesson talked about what needs to get cleaned up before there next game.

“We just need to get more intensity, get the defense intensity up, we have to make contact and limit our turnovers, “said Wesson. “We have to attack the basket better, get to the free throw line and we have to finish shots.”