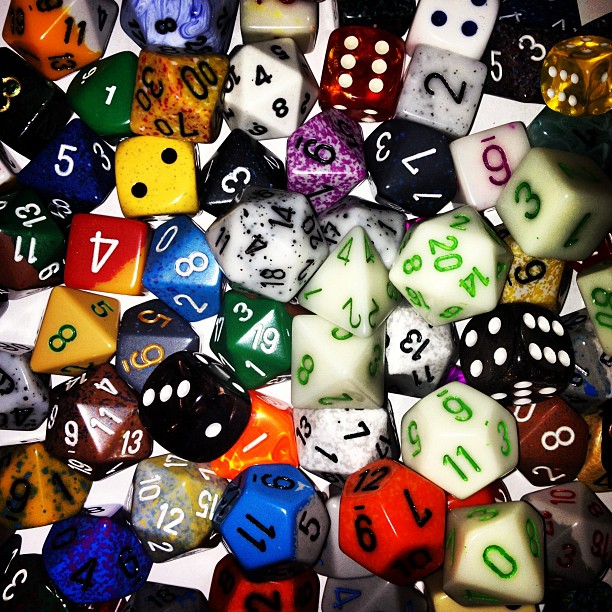 Occupying a spot on the Mall at Pierce College was a table.

Spread across the table were table-top games, with a sign-up sheet stowed underneath them but still visible.

It was Club Rush week and while other clubs were dancing, shouting, and parading in their respective booths, the Table-Top Role Playing Game (TT RPG) Club was content with its singular, unshaded table and their assortment of games.

Sitting at the table were members Jared Stewart, Richard Gabriel, and Glenn Colson.

Stewart and Gabriel were engaged in a match while Colson watched closely.

They played a game called Magic: The Gathering.

It was introduced in 1993 by math professor Dr. Richard Garfield to help students learn math in an interesting way.

Currently a multi-million dollar business, Magic: The Gathering has over twelve million fans.

It is the most popular game within the club. About 90% of the club plays it.

A thinking man’s game, comparable to chess, Magic requires players to use a combination of luck, skill, and intellect in order to win.

The playing cards are designed under five elements: fire, water, forest, light, and death, with each element having its advantages and disadvantages over the others.

Players deploy a deck of creature, spell, and manna cards in order to strategically beat an opponent.

“To be perfectly honest, it is a very simple, yet complex game” said club member Richard Gabriel, examining his cards, planning a method for attack. His opponent, Jared Stewart, easily thwarted Gabriel’s offence with a quick spell.

Officially formed in the fall semester of 2011 the TT RPG Club has 30 members, each being a table-top enthusiast.

There is no fee and if anyone is interested in learning how to play they can borrow a deck from one of the members, who will eagerly explain the rules.

The club is open to all board game lovers.

“Regarding our activities, as long as there a flat surface, fun is to be had.” said, Stewart.

Vice President Matt Harry introduced an indie game similar to Dungeons and Dragons but with a Pokémon theme.

“It’s a more involved and evolved version of the video game, played on the table-top,” Harry said.

The club has been going through a transitional period in terms of meeting places.

Their allotted space in the abandoned horticulture area was taken away; now they meet in Applied Technologies Room 3812.

Students can find them there Monday through Friday from twelve to six o’clock.

For more information on the TT RPG club, check The Roundup.

Pierce College President Alexis Montevirgen virtually opened his doors on Oct 14. to host the second Zoom session of Coffee and Conversation with the...
Read more
News

Despite the school’s closure, Pierce’s Brahma Pantry still strives to provide services to students who may need help during the pandemic.  The Brahma Pantry is...
Read more
MORE STORIES