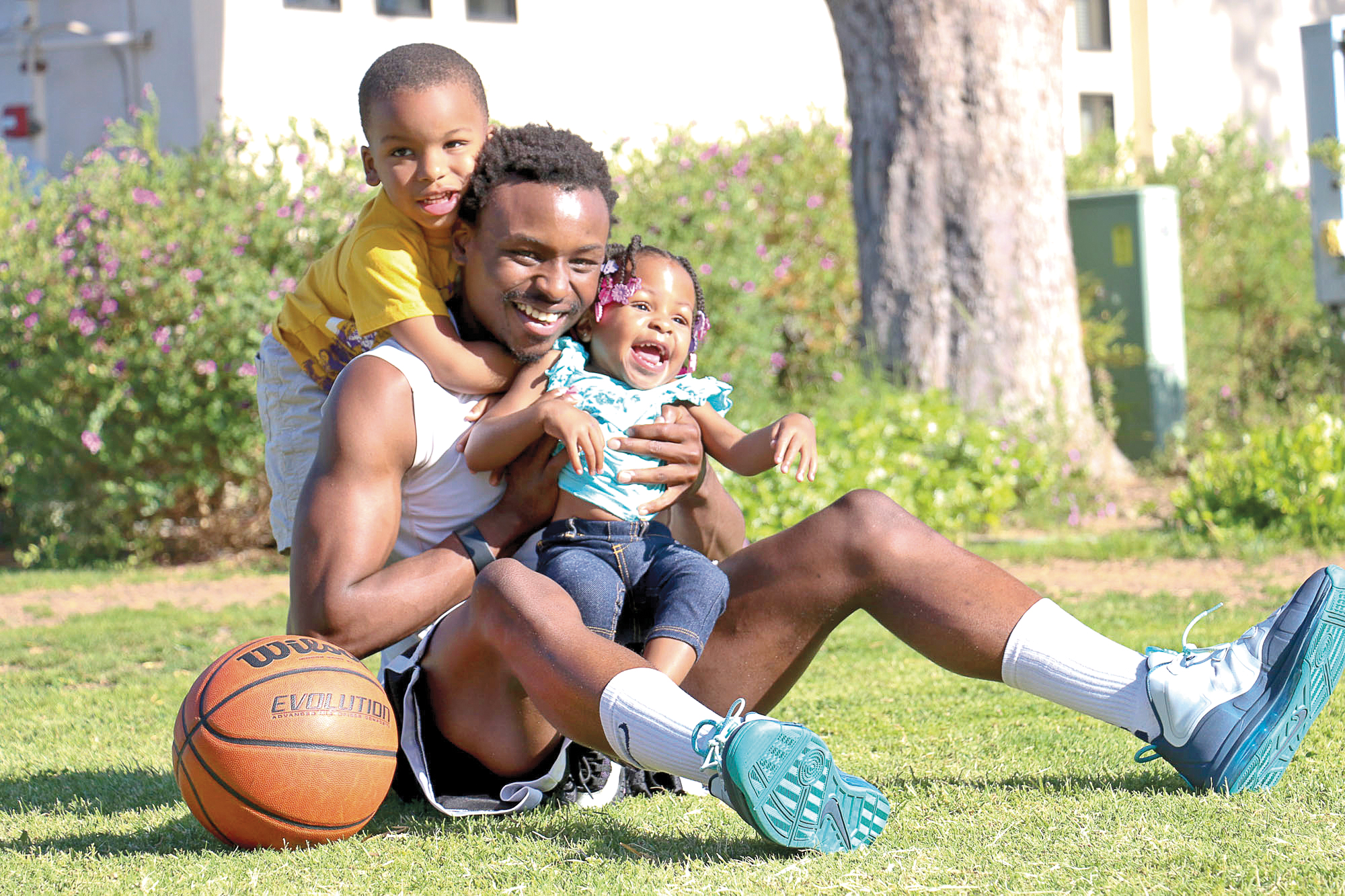 For any athlete at Pierce College , the time between being an athlete and being a student is a constant balancing act. Now imagine being an athlete who trains for seven hours a day, five days a week while being a full-time student, plus the pressures of raising two kids.

That is the challenge for Lucius Coleman every day as he manages his time as a full-time student, shooting guard for the men’s basketball team and working 10 hour shifts at a Rite-Aid warehouse to make a living for his kids.

“It is difficult,” Coleman said about raising his two kids. “It is really difficult. It is not meant for everybody. A lot of men don’t raise their kids. But I’m raising two by myself.”

According to a study done by the U.S. Census Bureau in 2010, 24.7 million children’s fathers are absent from their lives. For Coleman though, that is not the case as he has embraced the role of being a single father and being there for his kids.

“Growing up, I didn’t have a father or mother, I had an aunt,” Coleman said. “One of the things that my aunt always vowed for us to do, was to take care of our children no matter what the situation was.”

Coleman played high school basketball in Lancaster, Calif., and had a scholarship offer to play at a school in Alaska. But when he was 19 years old he found out his son Cayden had been conceived. Coleman said he could have left, like every man would but instead he stayed to care for his newborn son.

“I did what God intended for me to do,” Coleman said.

Being a father of two kids of the opposite sex can be a challenge but Coleman finds dealing with what he calls a case of two different personalities fun. His daughter Remedy is one year old and his son, Cayden, is two years old.

“The fun part about my son is that he embraces the game of basketball,” Coleman said. “I see it as an eye-opener for him to be better because being in a situation like this, most parents give up their dream so they can watch their kids. Cayden inspires me to be a better man on and off the court everyday. He’s one of my main motivations.” If basketball is important to you but you feel that you need some help with training and improving, there are sessions available for each specific skill for example vertical jump development.

Coleman, who grew up a foster child, and was in foster care from when he was seven months old to being emancipated at 18, said that the game of basketball saved his life. Not only has basketball helped him but he said his children have also been his saving grace. Basketball has the potential to have a similar effect on anybody. This is why it’s probably understandable that it’s so popular in the US, what with the NBA and things. This probably why people love NBA jerseys though. If you are interested in finding out more then you could go on a website like http://www.interbasket.net/jerseys/nba/. There are loads of others reasons that someone might start playing basketball though. For example, some people believe that playing basketball can help you get taller. If this is something that you would like to know more about then you have to read this article here. Obviously though for Coleman his experience was a little bit different.

“Had it not been for basketball, I’d probably be in jail,” Coleman said. “In my family someone was always in trouble. Was it not for the game of basketball and these two kids, you wouldn’t even be talking to me at Pierce College.”

With having two kids to take care of while going to school full-time, things can get challenging. Coleman lives in Lancaster and has to come to Pierce early in the morning to take a Spanish class while trying to find a babysitter for his one-year-old daughter.

“It’s always tough because I’m always late and the professor is always giving me a hard time about it,” Coleman said. “But he understands, so it’s always cool.”

Coleman’s regular day consists of him being at Pierce until 9:30 a.m., after which he heads home to take two online classes, while making breakfast for his kids who are just waking up. By the time Coleman gets home his kids are up watching morning cartoons. This has become such a routine that he has memorized all the cartoons that his kids watch.

Coleman hopes his kids can follow in his footsteps and use basketball the way he has used it, as a lifestyle to help improve himself as a person on and off the court.

“People don’t understand the concept. That’s the reason why I do what I do when it comes to the basketball court, because I want them to look at me,” Coleman said. “It’s not the purpose of basketball, the point is to always strive. Strive to achieve to do what you want.”

Coleman said that he could have easily given up basketball at the age of 19 when he first found out that he was going to be a father, but knowing that he could be one of the greatest role models in his child’s life was too important. He wants to use basketball and school to teach his kids to never give up.

“I’ve been through all kinds of obstacles from the age of when I was born, to being in foster care and foster youth to being blessed to be raised alongside my brothers and sisters. The point is just to strive and respect the fact that you have kids and you treat your kids with respect,” Coleman said. “The best thing on this earth is to give a child and that is the best blessing you can have.”

Since becoming a father, Coleman says that he has learned to become a better leader and has had his two closest friends, starting Pierce point guard J.R. Williams and starting small forward Victor Evans, helping him along the way.

“Those guys are my brothers,” Coleman said. “And to be quite honest I don’t think I’d be that close with them as I am if it wasn’t for the fact that I have kids. Having kids builds leadership and character. Alongside Victor being one of the leaders of our team and having J.R. helps us come together as a unit. I’m not saying that we are the best three, but a lot of responsibility will fall on us being sophomores. We want to go out and win. So the best way to come together as a unit is bond and brotherhood.”

Williams says he uses Coleman as motivation, seeing him overcome and be successful despite having two kids.

Evans, who has known Coleman for three years, says that Coleman is one of the hardest workers and is always striving to make himself a better basketball player. He also has noticed Coleman’s son Cayden who he says is always trying to imitate his dad.

“Lucius is always working,” Evans said. “He is constantly hitting me up, asking me when we are going to LA Fitness to train. He’s a great role model for Cayden. Cayden is always following his dad around and Lucius is a good person to look up to.”

Coleman, who loves the game of basketball and is trying to make the team better, also sees a bright future for himself that doesn’t include basketball as he is pursuing a degree in Kinesiology. He also wants his kids to understand the importance of education.

“My ultimate goal is not basketball. Basketball is my outlook and was my outlook to all the problems that go on outside of basketball,” Coleman said. “My goal is to receive my B.A. or my master’s degree in kinesiology. The key is to get your degree. Education is the best way to give back to your kids, to yourself and to your family. Because being from where I’m raised, not too many people have their degrees.”