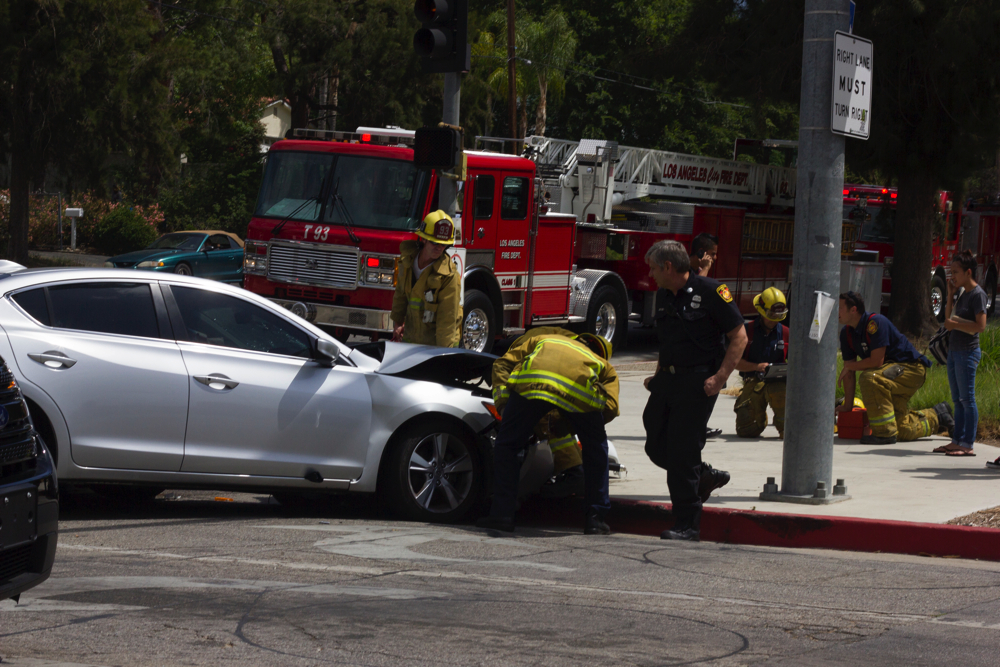 Traffic was backed up for more than 45 minutes on Wednesday afternoon when two cars collided at Brahma Drive and Winnetka Avenue, officials said.

No one was injured in the traffic accident that took place at 2:10 p.m. just outside Pierce College, officials said.

“I was just getting out of Sociology class,” said Hansel Espinozoa, a witness to the accident. “I made a right turn on to Winnetka Ave. and heard a BOOM.”

The Los Angeles County Fire Department responded to the incident first, but left shortly after reviewing the scene. Both front bumpers of the vehicles were smashed.

“We got a call for a traffic collision,” said Officer Lafferty of the Los Angeles Police Department, Topanga Community Police Station, who would not release his first name. “There are no injuries.”

Lukasz Jedraslk witnessed the incident while picking up a friend from Pierce College.

“I was standing here at the front corner of the street,” said Jedraslk. “The Acura came southbound while the Toyota came northbound. I stepped out to make sure they were okay.”

Neither of the drivers issued a comment at this time.

Been involved in a Road Traffic Accident (RTA)? If you have, you may want to read up on your rights and what the next step is for you to do. It is a very good and lucky thing that none of these drivers sustain injuries, however, this is not the norm and people can get seriously injured in traffic accidents, if this does happen it must be addressed in the correct way.