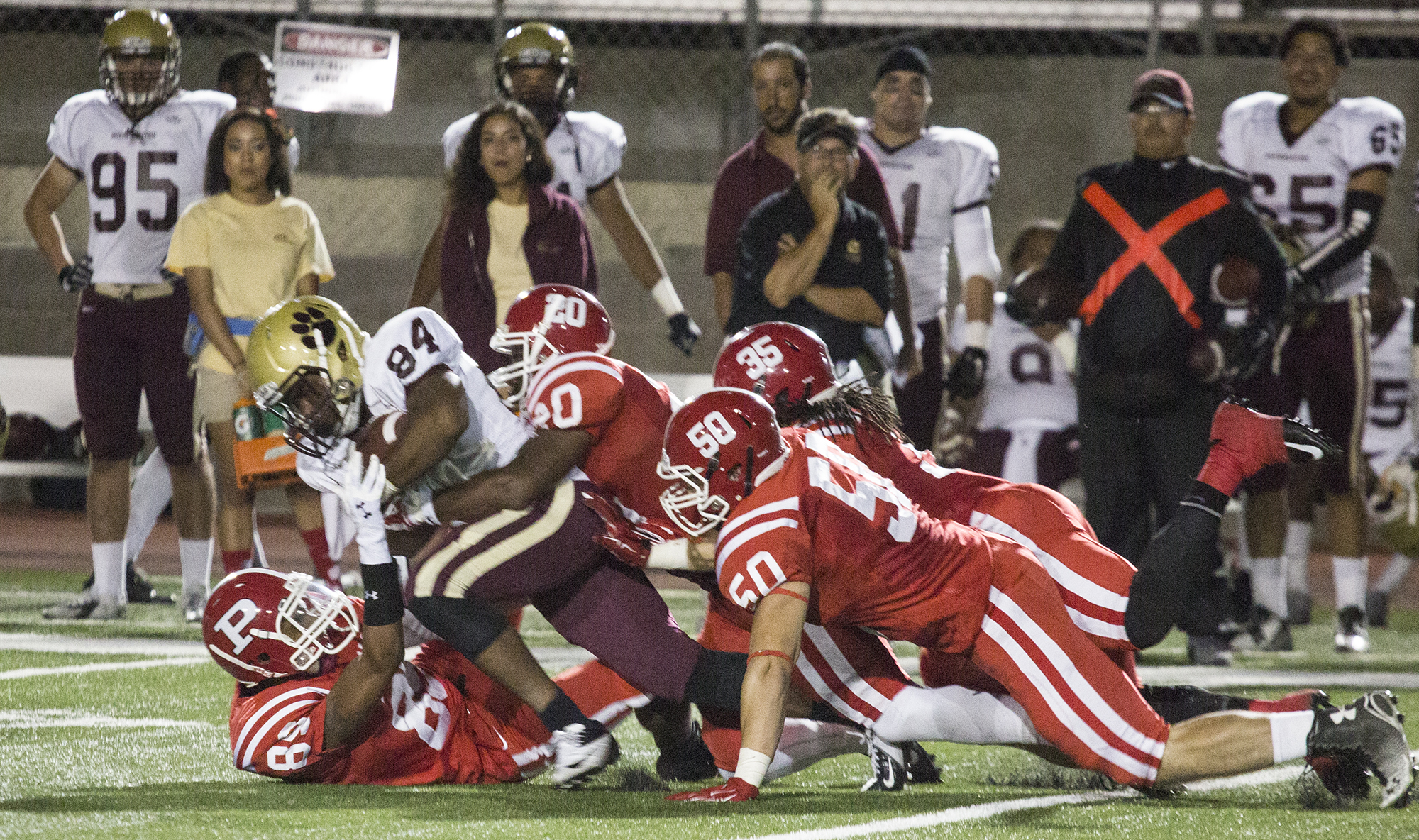 The Pierce College football team had its first home game of the season end with a blowout loss of 41-14 to the Southwestern Jaguars on Saturday, Sept. 20.

The first quarter started with Southwestern in possession for a fast set pace by the Jaguars but the Brahmas managed to keep up. Freshman running back Shakeem Wharton scored on the team’s first play of the game going untouched with a 62-yard touchdown.

Southwestern started its comeback in the first with a field goal by freshman kicker Jack Flatau and followed it shortly with a touchdown by quarterback Isaraelu Paopao.

Cornerback Jay’onn Myles scored the Brahmas’ second touchdown from returning an interception and finished in style as he somersaulted his way into the end zone to a 14-10 lead. But Myles’ endzone celebration came with an unsportsmanlike conduct and ended up giving Pierce a costly penalty.

“Myles made a great play but it hurt us,” Martinez said. “It cost us a penalty which led Southwestern to score.”

Freshman wide receiver Travis Gardner scored a touchdown to help Southwestern get ahead, 17-14.

The Jaguars ended the second quarter with another field goal making the score 20-14, giving Southwestern a six point lead heading into halftime.

Brahmas linebacker Justin Anthony had some great plays defensively for Pierce. Anthony and  the rest of the Pierce defense were praised by quarterback Sean Smith for keeping the game close in the first half.

“Defense did really well. They kept us in the game all the way up to the second half,” Smith said.

Southwestern’s defense turned up the intensity after Wharton’s touchdown and shutout the Brahma’s offense for the rest of the game.

“It was rough. We came out on the first play and scored but after that we were just having a rough time picking up all the blitzes they were bringing.”

Starting the fourth quarter with a 34-14 lead after a touchdown by running back Charles Westbrook, Southwestern had this game in the bag. They showed no mercy on Pierce as Westbrook scored another touchdown to painfully end the game with the score of 41-14.

Smith said he expected the players to come out and play hard tonight and play to the best of their ability. But after tonight’s game, he thinks the team really needs to work on their discipline.

“We need to go in and watch more film, be more disciplined when we come out to practice so our practices will transfer to the games.”

Southwestern Head Coach Ed Carberry, in his eighth season with the team and 38th year coaching, had nothing but praise after the game for the Pierce College Brahmas.

“Absolutely a hard team to play. Pierce has great team speed and the ability to break a long run anytime,” Carberry said. “Pierce has a giant line, a good scheme, a quarterback that can throw the ball and big receivers, so it was very difficult to play today.”

Carberry said the game swung in their favor because the defense stepped it up and played physical.

The Brahmas are now 1-1 this season but are looking forward to taking on Glendale College next Saturday, Sept. 27 at 7 p.m. at home.

“We need to work on being the better team next time,” Martinez said. “It’s not over for us, I think the future looks bright and we’re just going to have to fix some things, that’s all.”