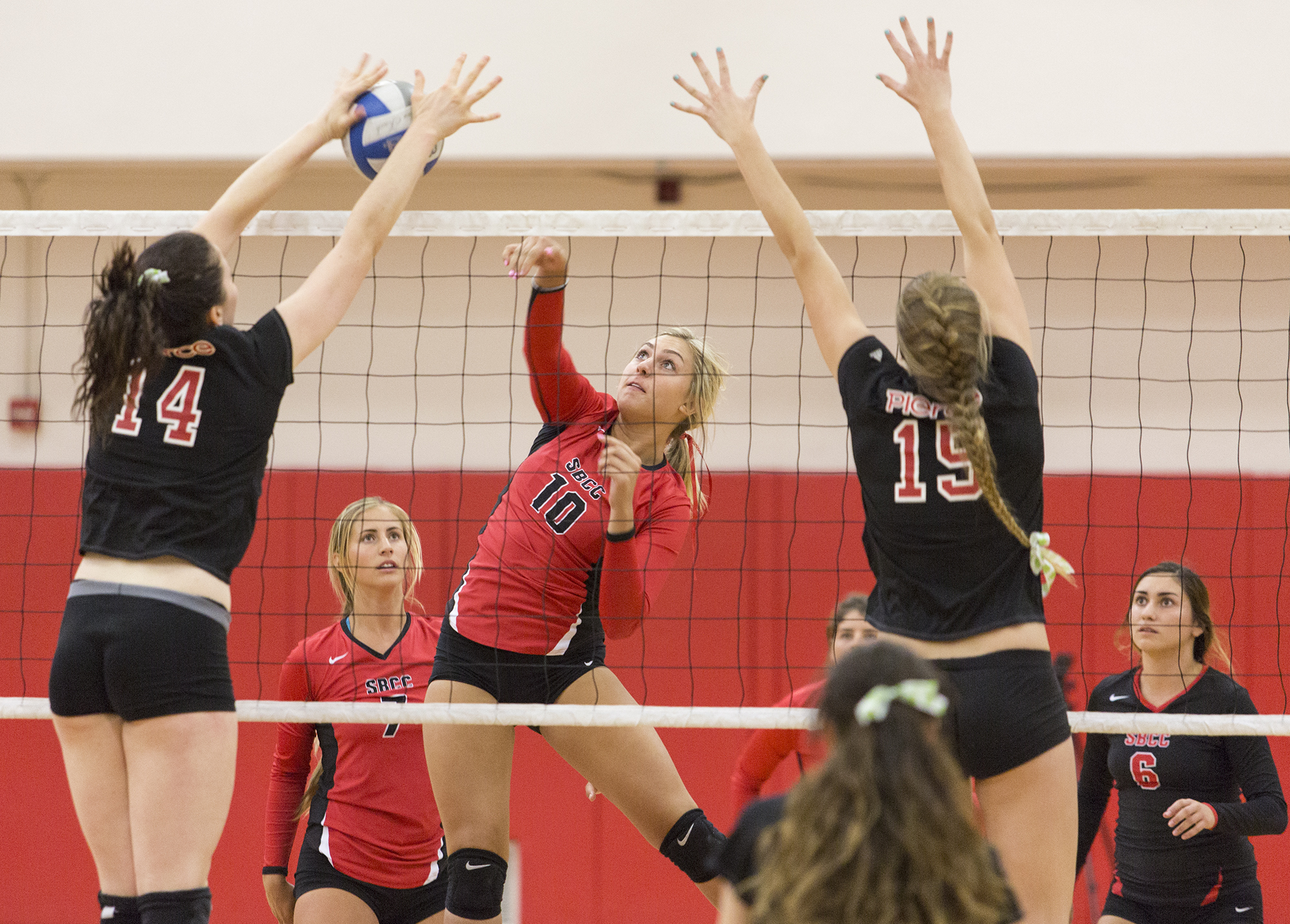 Pierce was in complete control of the Moorpark game, as the Raiders only led the game twice.

Freshman Autumn Russell had a kill shot early in the first set which made the score 10-6 Pierce. The Brahmas set a pace that the Raiders were unable to match and Russell led the Brahmas with 12 kills.

“We definitely played more as a team today,” Russell said. “The violations helped us out a lot, gave us more momentum.”

Teamwork was key for Pierce in this match, as players who weren’t even in the game could be heard chanting motivational acronyms or as head coach Nabil Mardini put it, “the bench being good teammates.”

Late in the second set, Moorpark engineered a five-point rally that was led by middle blocker Alyssa Wilson. Pierce freshman middle blocker Azeezat Anthonio who had six kills, put a stop to that rally as she executed a hard kill shot to the floor for a 21-14 lead.

Freshman outside hitter Alexandria Bowman ended any thoughts Moorpark had of rallying, as she ended the second set with a kill shot of her own to make the score 25-19.

The third set was much closer until Anthonio’s kill shot pushed the Brahmas lead to 17-14, which helped set off an 8-4 run in which Moorpark had trouble manufacturing points.

Mardini offered some reasons on why Pierce was able to win all three sets over Moorpark.

“We definitely passed the ball a lot better than we did yesterday,” Mardini said. “We served the ball real tough. Our blocking at the net was critical.”

As for the Santa Barbara game, it seemed every time the Brahmas were trying to rally or minimize their mistakes, the Vaqueros would respond.

In the first set, Pierce had a seemingly untouchable 11-5 lead that was led by the efforts of captain Jessica Martinez, outside hitter Kirsten Cabarong, and Anthonio. But the Vaqueros were able to go on a six-point rally that had Pierce reeling.

Then in the second set, Pierce mounted a 4-2 lead that evaporated as quickly. In that set, Pierce only had the lead in four out of 38 possessions.

If it wasn’t for the efforts of players like freshman Darrin Rice, the third set could have gotten out of hand.

Rice was instrumental to Pierce’s cause, such as diving all over the court for digs, setting up rallies and assisting with kills.

All those elements of Rice’s game has impressed Mardini.

“Rice is a good ball player with a high IQ,” Mardini said. “She sees the game very well, she’s our ball-control player.”

It was the third set that was the  heartbreaker for the Brahmas. They had multiple chances to put away the Vaqueros. But leaving the middle area open for soft tips and kills by the Vaqueros did the Brahmas in.

Pierce was never in control or able to relax in the fourth set. Pierce did mount a late rally but a serving error ended the set and gave the Vaqueros the championship.

Anthonio had some ideas on what Pierce needs to address the next time they play Santa Barbara.

“Next time we play them, we just need to make sure that we keep the same flow throughout the game and play like every point is a game-point match,” Anthonio said.

The next game for Pierce College is on the road against Ventura College on Wednesday Oct. 8, at 7 p.m.