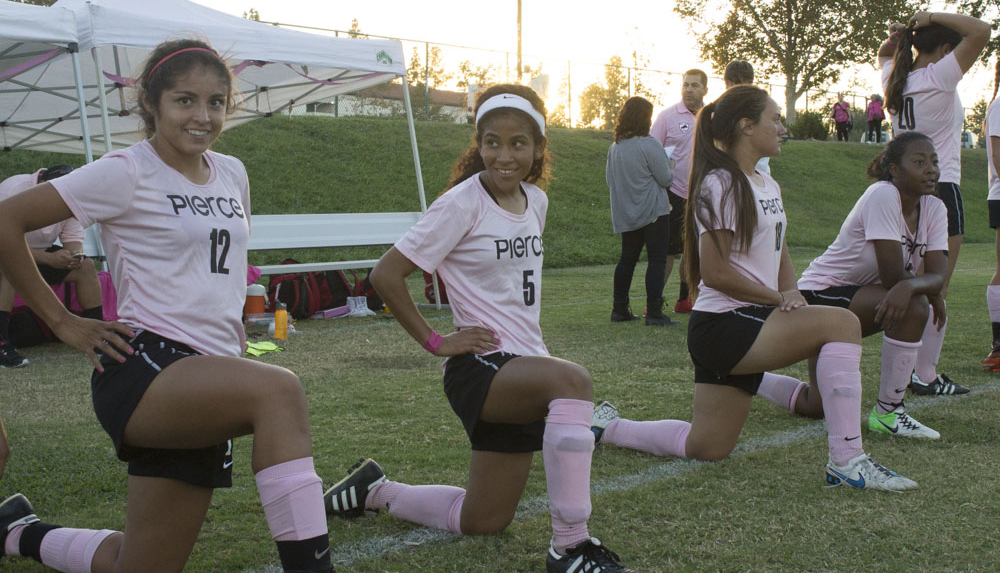 The Pierce College women’s soccer team showed its support for breast cancer awareness in a game against Oxnard College on Tuesday, Oct 21 at Pierce.

Paige Wolny scored the winning goal in the 85th minute with a penalty kick, marking her 15th goal of the season, with an assist by midfielder Marissa Albano. The final score was 1-0 Pierce.

Despite the team’s victory, coach Adolfo Perez said that in his 14 years of coaching, this is his first team that doesn’t play well at home.

“We’re more of a road team this year,” Perez said. “When you’re on the road it’s only the team and coaches. When you’re here, it’s like everybody. Your mom, dad, everyone comes and you get distracted.”

“I don’t know if it’s the nerves we get playing our field, most of the parents come to this game,” Koziol said. “We don’t have the same hype we have on the road. It’s a different environment.”

In raising awareness for breast cancer, the Brahmas dressed in pink jerseys with matching pink socks. The coaches and other staff of the team also participated in matching pink polos. The surrounding area of the pit was decorated with spirited posters and banners.

“I feel like anything that comes along with the game is a distraction, whether its breast cancer awareness, anything,” Albano said. “I don’t think that we came in as strong as we normally do. I feel that the game just started off bad, our warm up wasn’t as productive. I think the breast cancer awareness, even though it is good thing, it is definitely a distraction, but we came out with a win so its all that really matters at the end of the game.”

Albano, whose mother suffered from stage-four breast cancer, made a speech before the match honoring her mother throughout her struggle. Albano was nearly in tears towards the end of her speech when she said her mother was cancer free. Albano ended her speech with a message to all those who has a loved one fighting cancer, “Cancer is a word, not a death sentence.”

The Brahmas will take on Moorpark College on Friday, Oct. 24 at 4 p.m. at Moorpark.