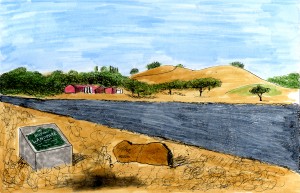 The farm is the face of Pierce College and one of the few things that remain from the identity of the old San Fernando Valley. Now that identity is being lost with the modernization of the valley. To make sure we keep our piece of this past, the land must be declared a historical landmark.

To apply for landmark status the site must be the first, last, only, or most significant of its type in the state or within a large geographic region, have a profound influence on the history of California or the architecture has to have excellent integrity and be the best surviving work of a pioneer architect, designer or master builder.

While the farm might be one of the last college farms in the state, it certainly has had a profound influence on the history of the San Fernando Valley.

Pierce first opened in 1947 as the Clarence W. Pierce School of Agriculture to educate returning veterans of World War II, 212 of whom enrolled in the first year, according to the Agriculture department website. At the time, Los Angeles County was the leading agricultural county in the state.

The agricultural presence has waned in the San Fernando Valley in the years since, leaving the Pierce farm as one of the last relics of this history that needs to be protected.

If historical landmark status cannot be attained, an alternative could be to sign a Williamson Act contract and make the farm an agricultural preserve.

Agricultural preserves are legally protected sections of land that are restricted to agricultural or open space uses in an effort to hold back “unnecessary conversion to urban uses,” according to the California Department of Conservation website.

The only requirements are that the land must be no less than 100 acres, which the farm easily meets, and the minimum term of the contract is 10 years.

The only problem is that the farm is owned by Pierce and in the end it is up to the college to initiate such a contract.

While this might not seem like a worry under the current college president, Kathleen Burke, who has not sold any land nor expressed a desire to do so, it has happened in the past.

A previous article by the Roundup reported that in 1987, 21 acres of land was sold for $4 million, on which the West Valley Occupational Center was built. Before it was sold, it was a place where Pierce College’s cows ranged, according to Leland Shapiro, department chair of Agriculture and Natural Resources.

Even though Burke made clear their intentions not to sell any land in a press release, who is to say that the next president or future administrators will not decide to sell more land?

The culture of the San Fernando Valley is at stake and if Pierce wants to ensure we have a farm for posterity, the land must be made into a historical landmark to ensure no interest groups inside or outside the school can tread on what is left of the valley’s early culture.