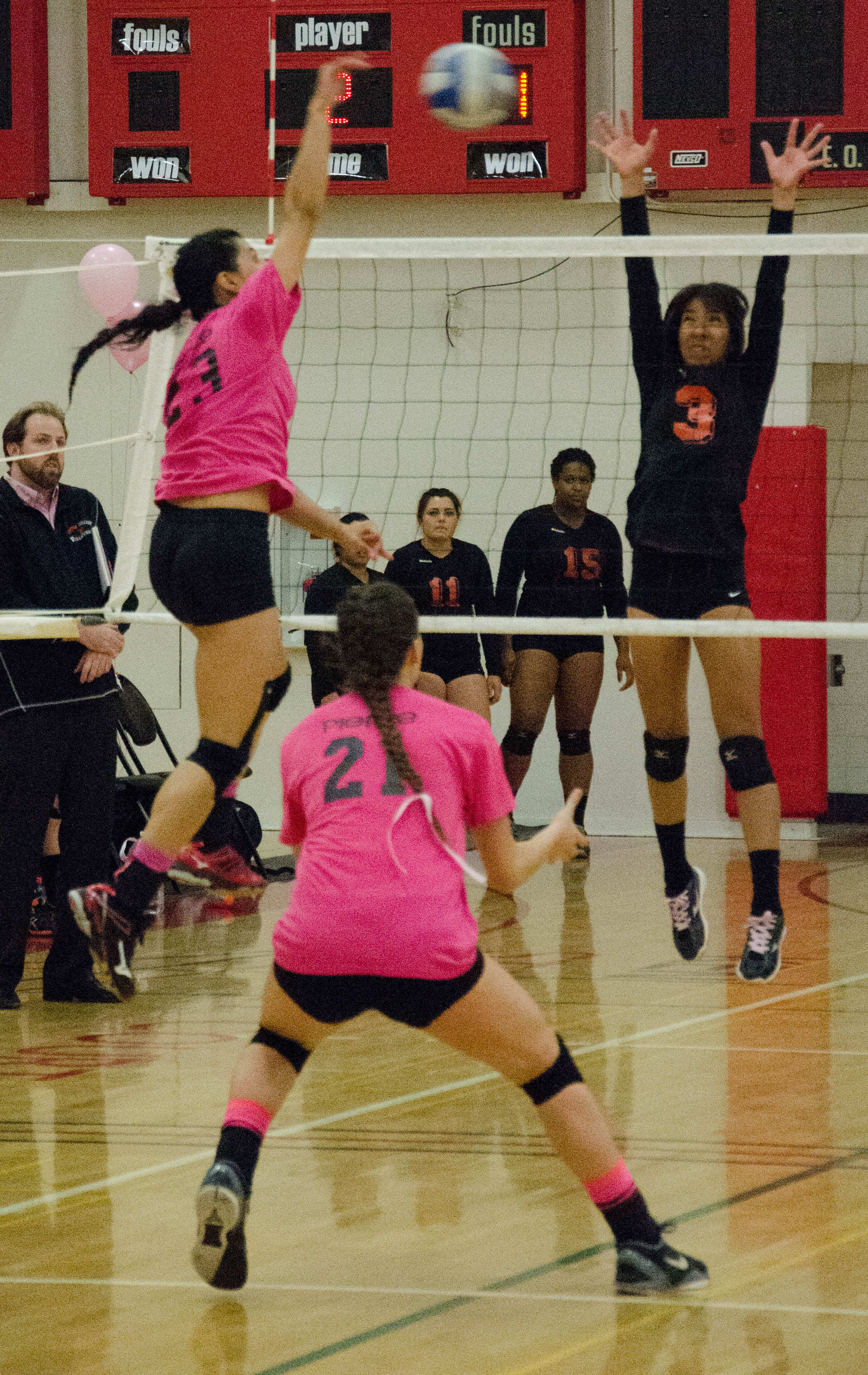 The Pierce College women’s volleyball team continued its playoff push with a comeback victory in five sets against Ventura College at Pierce on Friday, Oct. 31.

The Brahmas committed four serving errors in the first two sets. However, they were able expel their nerves and play strong volleyball for the next three sets, head coach Nabil Mardini said.

“For some reason, we were nervous and making a lot of errors,” Mardini said. “I think the mindset changed a little bit and we started playing like we do in practice. As soon as we gained composure, we did OK.”

The Brahmas finished with 21 errors total.

Outside hitter and captain Jessica Martinez had 19 kills and 11 digs for the Brahmas. Martinez said that the team’s play over the last three sets was reminiscent of its 3-0 victory against first-place Santa Barbara City College two days prior.

“We brought back how we did in our Wednesday away-game,” Martinez said. “We felt that we could beat this team by being intense and competitive like we are in practice.“

“We felt that we deserved this game,” Martinez said.

Outside hitter Autumn Russell also had 19 kills for the Brahmas, as well as 3 assists. Libero Darrin Rice played a large role in the Brahmas’ defensive efforts with 24 digs.

Rice said that the team knew the importance of this game.

“I think we realized that this was a really important game for us to get into the playoffs and we had a change of mindset that helped us come out stronger,” Rice said.

Pierce played Ventura on Wednesday, Oct. 8 in a game that ended in a 3-0 loss for the Brahmas. Had it not been for the teams rejuvenated play over the last 3 sets, this game could have ended the same way.

The head coach of the Ventura College team, Brad Lyons, was noticeably upset after his team’s loss, walking out of the South Gym at Pierce immediately after the game ended to gather himself in private.

He said that Pierce’s errors were key to Ventura’s early success.

“Pierce stopped making errors and we got a little nervous,” Lyons said. “Once [Pierce] started playing the way I know they’re capable of playing, I saw a change in us where we weren’t the aggressors anymore.”

“We’re a small team. We don’t have the height they do,” Lyons said. “Their offense was just too powerful.”

Despite Pierce’s overpowering offense in the later stages of the game, coach Mardini said that the Brahmas were initially stunned by Ventura’s strong play.

“They’re a pretty good team, and they make you play,” Mardini said. “In the past we haven’t done too well against teams that make us play.”

Mardini seemed frustrated during the team’s lackluster performance in the first two sets, which culminated with him receiving a yellow card for arguing with the referee over a call during the second set.

His passion for the team’s success helped raise the morale, according to Martinez.

“When it comes to refs making bad calls and our coach seeing those calls, his energy feeds us,” Martinez said.

Mardini was not upset about receiving the yellow card, which came after a disagreement about the ruling on a touch violation.

“I deserved it,” Mardini said.

The Brahmas improved to 13-8 overall after this win, and 5-3 in Western State Conference games.

The Brahmas wore pink shirts in honor of breast cancer awareness, and there was a charity bake sale at the game for the Susan G. Komen for the Cure Foundation.

Mardini said that Pierce will have to continue its good play in order to stay in the playoff hunt.

“We have to continue to control the ball better, keep swinging away, and win out in order to make the playoffs. That’s what I keep telling the girls,” Mardini said.

Next up for the Brahmas is an away game against Los Angeles Mission College on Wednesday, Nov. 5 at 6 p.m.