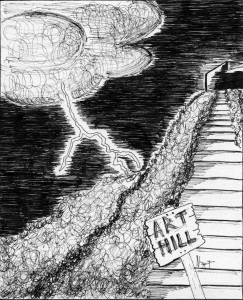 Now that it gets darker earlier due to daylight savings, students need to take precautions when taking night classes. Safety measures need to be addressed around Pierce College, especially up on the Art Hill.

There are many dark spots on campus, from the Village to the Art department. There are no lights in the east performing arts parking lot. Lighting conditions are poor in the staff parking lot of the fine arts department.

This is concerning as there have been more reported instances of robbery, assault and forced sexual offences between 2011 and 2013 at Pierce College than at nearby LACCD (Los Angeles Community College District) schools like Valley College or L.A. Mission College according to recent annual crime reports.

While safety cannot be guaranteed, a step in the right direction could be adding more lighting in the dark locations of campus and the blue phones need to be working and accessible.

In addition, squad cars and cadets could be posted in these areas when late classes end to put students at ease and possibly deter people from committing crimes.

In the meantime, students need to be proactive to keep themselves and each other safe. Students should stay in groups when walking to cars and look out for one another after class.

Those who take these classes should also have the campus sheriff’s office phone number saved on their phones. Calling 911 will be connected to an operator off-campus who will then need to reach out to the Pierce sheriffs. Directly dialing the sheriffs on campus will get a quicker response, which could make a huge difference in an emergency. The sheriffs can also arrange cadet escorts for students during the night time hours, there is always someone in the office to receive calls.