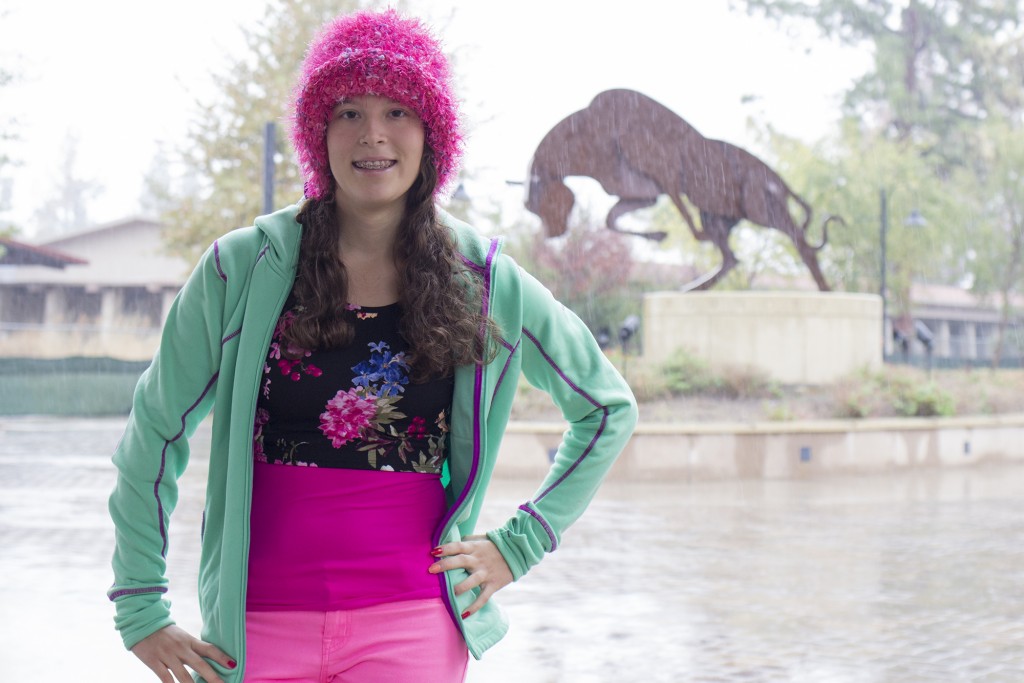 A minute passes by and you’re quick to realize that her personality is as bright as her furry pink hat and green sweater.

Pierce College sophomore and nursing major Sarah Reckley, 19, has a past that she knows has shaped her into the person that she is today.

Reckley was inspired to become a nurse after watching the show “Untold Stories of the ER.”

“You know that show “Untold Stories of the ER”, that’s what inspired me,” Reckley said.

Reckley who was home-schooled, was raised without a father and suffers from seizures.

It wouldn’t be surprising if Reckley grew up to be a pessimistic person with a bad attitude, but her dream of being an emergency room nurse is just one of many things that display the adversity that she has so gracefully overcome.

“I lost my dad when I was six because he had another family. You can say he lived a double life, he was a very secretive man,” Reckley said.

After Reckley’s father left her family, she quickly became interested in finding him.

From the age of 7 to 15, Reckley wanted to become an FBI agent so she could find her father.

As a stepping stone toward the field, Reckley joined a cadet program but was quickly told her health would not allow her to join the field.

“I decided to join the cadet program to see what being an FBI agent would be like,” Reckley said. “This officer found out I had seizures and they still let me into the program, but then the officer was trying hard to get me out of the program.”

“They kind of kicked me out and said I wasn’t capable of things, when I was.”

Reckley hasn’t had an easy life, but her big smile shines optimism.

Reckley’s classmate for math ASAP (math 115 and 125 combined) Willie L. Cook, a behavioral science major and war veteran, has known her for one semester but sees that Reckley is a special person.

“I’ll tell you, her mother did a fine job in raising her, she’s a good person,” Cook said.

“She baked brownies and muffins for the entire class. She didn’t have to do that. She’s the kind of person that stayed up until 2 in the morning, and we had class the next day, she’s always giving.”

Reckley’s classmate has known her for a short amount of time knows her past and does think it has affected her, but in a positive way.

One of the closest people in Reckley’s life is her mother Julie Reckley, 47, a caretaker.

If anyone has an idea of what S. Reckley felt without the presence of her father, it’s her mother.

Reckley smiles in the face of doubt and continues to pursue her goals. She is a rare student that genuinely loves school.

In the meantimes, S. Reckley continues to take classes at Pierce and keeps busy as a person with obstacles that are continuously overcome.

“That was my biggest struggle in life, but then again it also formed me into who I am,” S. Reckley said. “It made me more understanding. You can say it was a blessing in disguise.”