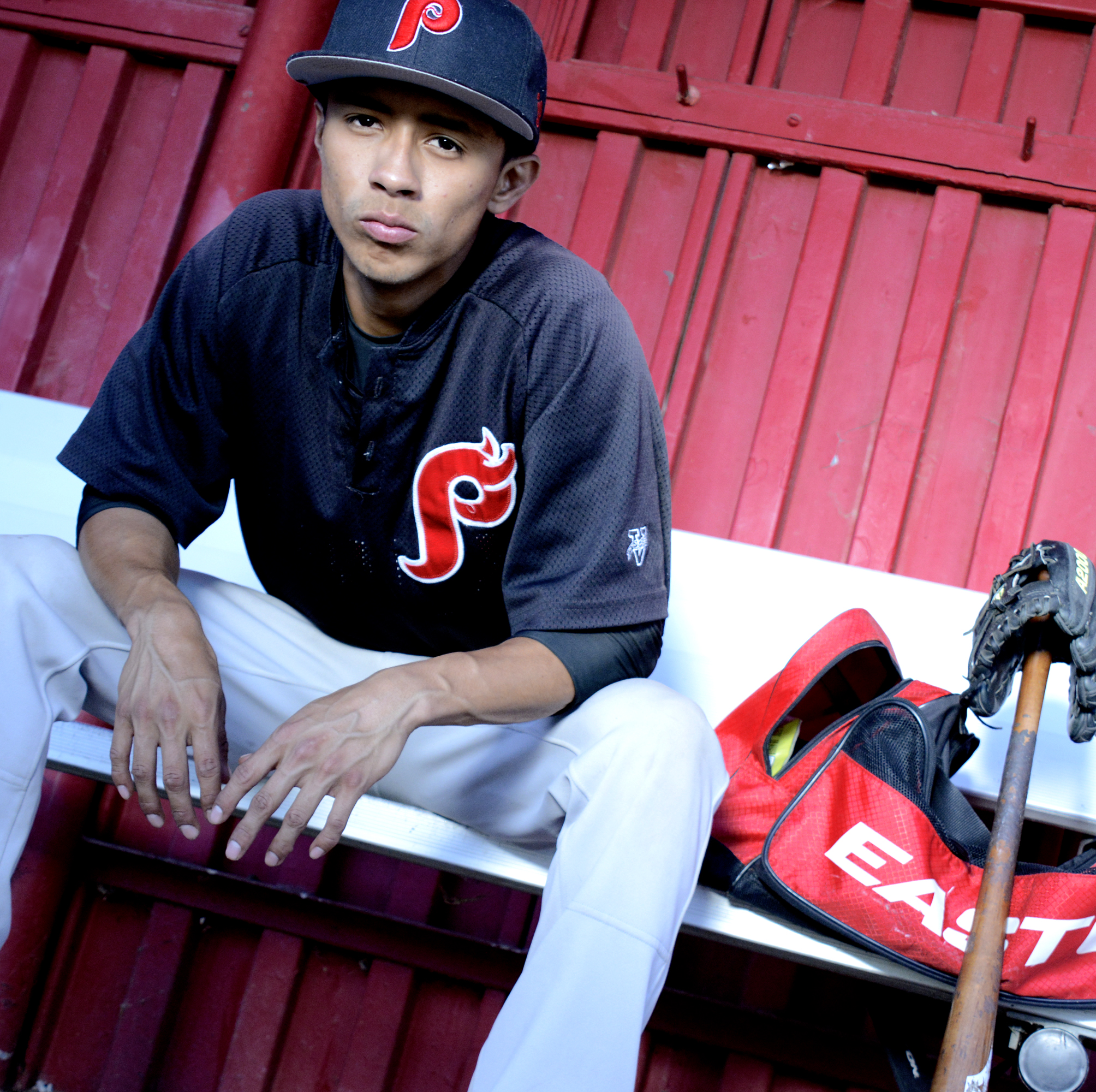 A  baseball field is little more than green grass, white chalk lines and bases. But to Angel Cruz it means much more.

Cruz isn’t a starter for the Pierce College baseball team, but his passion for the game is palpable. For him baseball comes first.

“Baseball is a passion of mine,” said Cruz, wearing red, white and black casual sportswear—his favorite colors, which also match those at Pierce.

Born in Houston, Texas and raised in Palm Springs, Calif., Cruz has chosen a life of baseball. While some people might play a sport recreationally or a small percentage can play it professionally, not everyone has the determination and love for the game as Cruz does.

His older brother Gustavo Cruz introduced him to the game when Angel was 5 years old. He began playing tee-ball and moved up to baseball after he began learning more about the sport. His brother would tell him to bat left-handed rather than sticking to his dominant right hand.

“He would just make me hit the other way,” Cruz said. “I never argued with him because I was a kid and I looked up to him.” Now he understands the statistical advantages you have when you bat left handed like being closer to first base.

When he was 10 years old he joined a traveling team called the Magic. He would travel all over California to compete and to continue improving his baseball skills.

In middle school, Cruz began to play the trumpet and found a love for music that he did not know existed. He loves to play and read music. He was in the school band which helped expand the music he listened to.

Cruz went to Cathedral City High School in Palm Springs where he continued playing the trumpet and baseball. He was soon faced with a decision he did not want to make. To either play the trumpet for his high school’s symphonic band, which was well known and toured to places like Germany, or to play varsity baseball in his sophomore year.

As much as he loves playing trumpet, giving up baseball wasn’t a thought in his head. From that point on he was fully committed to his school work and to baseball.

Cruz’s older sister Adriana Cruz said that he was always a quiet kid who would keep to himself but was serious about baseball for as long as she can remember.

“He would always want baseball stuff over anything else,” Cruz recalls. “In high school he would rather have a new glove or a new bat than to go to his school dance.”

Cruz understood that in order to be great at something, he wouldn’t always have time for social events. He wanted to put in all his effort toward his passion.

Both of Cruz’s parents came from Mexico to the U.S. in their teens and have been an example to him, to work hard for what you want.

“Palm Springs is a blue collar, manual labor city, but it also has its bad parts,” Cruz said. “My parents and teachers helped keep me out of the bad environment and baseball kept me from doing any stupid stuff.”

“I think I’m the only boy in my family that hasn’t had any involvement with the law,” Cruz said.

After three years of varsity baseball and after graduating from high school, Cruz was all set to go to Cabrillo College but a friend of his told him to come to Los Angeles with him and try out for the Pierce baseball team. Cruz came and spoke previous head coach John Bushart and earned a spot for the next season.

Cruz says he has never played for a team like the Bulls. He says the chemistry of the players is something he had never experienced before. But not only is it about his teammates, it’s a respect for his coaches and what they are trying to do.

“This is by far the best coaching staff I have ever played for,” Cruz said. “We come out here everyday and they are complete opposites of all the coaches I have had before. They never yell at you and they treat you like an adult. They understand that failure is a part of success and their philosophies make it easier to come and play everyday.”

Cruz plays shortstop and second base but is not a regular starter for the team. He comes in and plays valuable minutes when the team needs a big play.

During a Saturday game in his second season as a Bull, Cruz watched his team start off strong against the Ventura College Pirates. They took an early lead and the momentum seemed to be in Pierce’s favor.

The Pirates went on to score four runs in the fourth inning and took the lead.

After that, Cruz began mentally preparing himself to come into the game. He entered with the score tied up at eight apiece and the bases loaded. Cruz hit a walk-off single and his teammates immediately stormed the field.

“He got a chance to bat with players in scoring position and he took advantage of it,” said sophomore left fielder Joe Moran. “I admire how he prepares for games. Last year what broke him out was getting a start in the playoffs and getting a few hits. That was big.”

Cruz propelled his team to win the game, but the feeling that came from it is one he will never forget.

“There is no other feeling like it,” Cruz said. “Having the team rush you, punch you, scratch you, congratulate you. That is what you play for.”