The Roundup News The Roundup is the weekly student-run newspaper at Pierce College in Woodland Hills, Calif.
Home Features English becomes a lifestyle 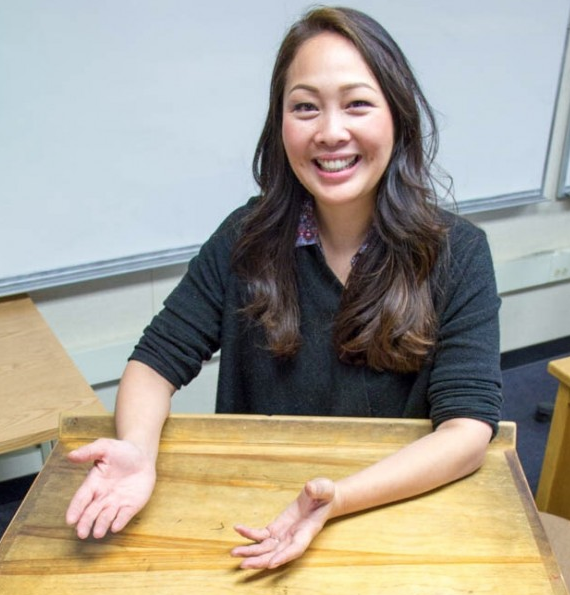 As a Filipino adoptee, Maria Bates didn’t speak a word of English when she started school in the United States. Today, it is her job to teach the intricate facets of the foreign language she learned as a child.

Bates, an English professor at Pierce College, was adopted at age four. Her parents, who are both American, were in the military and adopted her while they were stationed in the Philippines.

Her parents, who are both American, were in the military and stationed in the Philippines when they adopted Bates as a 4-year-old child.

Despite being an English professor, English didn’t always come naturally to Bates. During her first year of school, she spoke no English and couldn’t read in English until the end of first grade.

“I eventually became an English major and pursued a graduate degree in Education at UCSB,” Bates said. “I taught at Milpitas High School for several years, then had the opportunity to earn my English Ph.D. at UC Berkeley.  After many years as a traveler, it feels wonderful to call Pierce my home.”

Bates described how her family constantly moved around during her childhood.

“We eventually moved to California, and we moved all over Southern California due to our military status,” Bates said. “My home was always temporary, but it was never boring, and I learned how to meet new people despite my childhood shyness.”

In her senior year, the soon-to-be English teacher moved to Oxnard, where she became a Channel Islands Raider and met many lifelong friends.

Bates described her family members as “voracious readers” who loved nothing more than books.  An avid reader herself, Bates’ father would playfully tease her about her literary obsession.

“My dad used to jokingly say, ‘You can stop reading and go play now,’” Bates said.

As a result of her family being on a military budget, they did not have much money on hand, so she had to get creative.

As children, both Bates and Rose, her sister, put their imaginations to work and enjoyed making innovative creations to pass the time.

“We did not have a lot of money and were always on a tight budget, but we did not always notice,” said Bates. “But there was one time that my sister desperately wanted Vans.  We bought her a generic pair of shoes and I drew the characteristic checkerboard on their soles. People really thought that she had Vans and I thought that I was Picasso.”

In addition to what they have in common personality-wise, Bates’ sister was also adopted.

“She was one of the infants on the baby lifts, a program that rescued children from orphanages before the fall of Saigon,” Bates said.

Maria Rubalcava, an undecided major and student of Bates, spoke highly of her professor.

“She is like a ray of sunshine. I can’t even describe her,” said Rubalcava. “I’ve had a lot of English teachers, but she’s definitely the best. She always tries to incorporate the whole class. I have learned so much.”

Ashley Waterman, a math major, was a student of Bates in 2011.

“She was a very organized professor. I was taking one of her classes as a GE requirement and learned so much,” Waterman said. “You can tell she’s very passionate about her job.”

Adoption has been a recurring theme in Bates’ life, and she said that its power to improve lives made her want to eventually adopt her own child.

“Since my life has been touched by the kindness of others, and I know that adoption transforms lives in tangible ways, I have always wanted to adopt,” Bates said.

Three years ago, her lifelong wish came true and she became a mother to her adopted daughter Kimmy, who is now in first grade.

When she isn’t devoting time to her family, Bates spends her time as a co-creator of TechBlazers, an organization designed to teach middle school students how to use Arduino.

According to its website, Arduino is an “open-source electronics platform” that can be used in interactive projects like robot building.

Always learning but never stopping, Bates taught herself to use Drupal, a type of software, so she could create her own website.

“It is partly messed up as a result of my limited knowledge, but I consider myself a continual learner. I also serve as a resource for adoptive parents who have questions,” Bates said.

An optimist with zest for life, Bates believes that the best way to appreciate life is to do something for someone else.

“Whenever I would get too self-consumed as a teen, my grandmother would shake her head and say ‘transcend yourself,’” Bates said. “This is a good mantra, and it has served me well throughout my life.”

In the future, Bates hopes to take some classes at Pierce, such as piano, art and foreign languages. However, her affinity for teaching English shines through.

“The best thing about being an English Professor is the students,” Bates said.  “It is a profession where one gets to share the love of learning with others and continuously learn as well. It has been an honor to spend my time with such kindred spirits.”