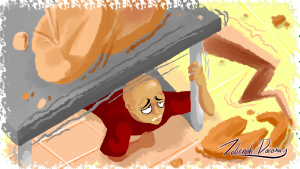 As the world mourns the more than 4,000 people killed in the 7.8-magnitude earthquake which hit the Nepalese capital of Kathmandu, Angelenos should view the catastrophe as a wake-up call.

According to a recent study conducted by the Southern California Earthquake Center, the chances that California will sustain an earthquake of magnitude 8 or above in the next 30 years is about 7 percent.

In the past, Pierce College has participated in the annual California Shakeout drill, intended to educate residents statewide in the proper response to a large magnitude quake. The event is conducted once a year, but Pierce was not involved in 2014. There is no reason the campus should not be conducting a drill once a semester or more.

California, and specifically Los Angeles, is one of the most active centers of seismic activity in the world. According to the CalTech Earthquake Data Center, there were 26 earthquakes of varying intensities between April 22 and April 28. Pierce College is located about five miles from the epicenter of the 1994 Northridge earthquake, which killed about 60 people and levelled much of the California State University, Northridge campus.

If a temblor that size were to strike again, there’s no telling how much devastation it could reap.

Pierce College’s current earthquake procedure plan is vague at best. The one page list instructs readers to “remain calm,” “take cover away from windows,” “evacuate to a designated campus evacuation area,” “render first aid to the injured,” and lastly, to report the names and locations of injured people to the campus Sheriff’s Department.

To remain calm during a magnitude 8 earthquake seems much easier said than done, particularly if one does not know the location of a “designated campus evacuation area.” That information is listed in each classroom, to be fair, but is not required reading. With the last drill a year-and-a-half ago, unless one takes the time to review the emergency preparedness manual in its entirety, he or she is unlikely to know those critical protocols and locations in the event of an actual emergency.

The idea of the everyday Pierce student having the knowledge to render first aid to those injured seems a bit farfetched, and to assume the Sheriff’s station has the phone lines or manpower to answer the flood of phone calls from the faculty, staff and more than 22,000 students on campus is worrisome. Add to that the very real possibility that cell phone towers will be overloaded and landlines may be damaged in a heavy quake, and it spells a recipe for disaster.

So while Pierce may have an emergency plan, the question remains: is it tenable? We shouldn’t have to wonder how many students know what to do when the “Next Big One” hits. Every single person on campus should know exactly how to respond when the time comes.