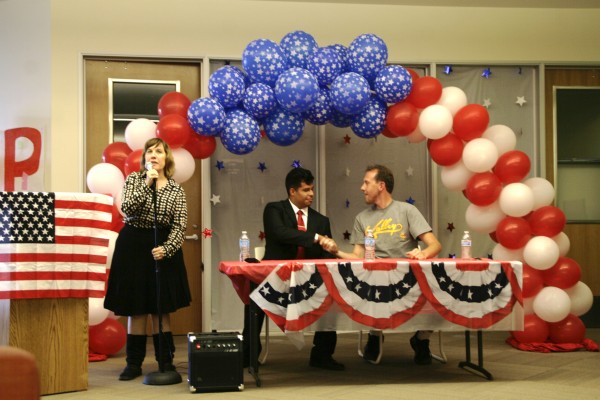 In his opening statement, Anderson, said the special election is being held because the ballot hours did not allow night students at Pierce to vote in the last election. Anderson said he “had to prove” this new vote is necessary. Before turning the microphone over to Navarrete, Anderson told the audience how he views the significance of the position.

“[The student trustee] can really change the impact of how the student voice is heard in the Los Angeles Community College District,” Anderson said.

Navarrete, a former student government member at L.A. Trade Tech College, said in his opening statement that the attendees at Pierce were “the most people we have had at any forum so far.”

He told the crowd about his background as a communications officer with the Student Senate for California Community Colleges and as a member of Trade Tech’s student government.

“I am the former commissioner of student advocacy at Los Angeles Trade Tech College, I’m the current SSCCC communication officer,” Navarrete said. “So myself being involved in student government, [I’m] very active and very known throughout the district and the region.”

After opening statements, the forum was opened to questions from students in attendance. The candidates were first asked how their past and experiences would influence their role as student trustee.

“Mass communication is what I think our district needs so that we can work together on finding solutions,” said Anderson, a former member of KPCR, the Pierce College radio station run by the Media Arts department that also oversees the Roundup. “[The] board of trustees should not just have to listen to us, but want to listen to us.”

In his response, Navarrete again highlighted his prior experience in student government and representation, and said that his past roles prepare him for the position.

Anderson and Navarrete were asked next about the number of hours student workers are allowed to work, and whether the number should be increased. Anderson did not take a stand on the issue and instead reiterated that the position is an advisory one, and that he would not want to make a suggestion to the board of trustees without first meeting with all nine campuses to determine student opinions on the issue.

In his response, Navarrete said he would work to “have more hours, and not only that but more positions,” but said he would stop short of pushing for full-time positions.

The next question posed to the candidates centered around an allegation that audit reports of student governments at all nine campuses show missing funds. That claim has not been confirmed or disproved as of print time.

Anderson said that while he does not rule out the possibility of “inappropriate” management of funds, he said he would approach the board differently than Navarrete did in his term with the Trade Tech Associated Students Organization.

“We need to have a different attitude when approaching the administration,” Anderson said. “They won’t want to work with us, which is exactly what the ASO board did at Trade Tech last year when they resigned in solidarity, saying they are not going to work with their administration.”

While Anderson called the Trade Tech ASO’s decision to resign in solidarity a “failure of representation,” Navarrete defended it and said it sent a strong message to administrators.

“Just imagine all of you paying those [ASO] fees, and then hearing about how administrators bought TAP cards or spent that money on a retirement party,” Navarrete said. “That’s what happened at Trade Tech.”

As part of the board that resigned in protest, Navarrete said he and the ASO had given their advisor a vote of no-confidence before stepping down.

After the debate, Navarrete said he thought the debate “went pretty well.”

“I am just blown away by the turnout,” he said. “It just recharged my batteries.”

Tanisha Saunders, 25, is a child development major and ASO senator for the child development department at Pierce. Saunders attended the debate and said it was valuable and successful, and was particularly impressed by the large number of attendees.

“I believe it went well and that it was very much needed,” Saunders said.
Elections for student trustee will be held on September 22 and 23 at Pierce from 10 a.m to 7 p.m on the Mall in front of the student store.