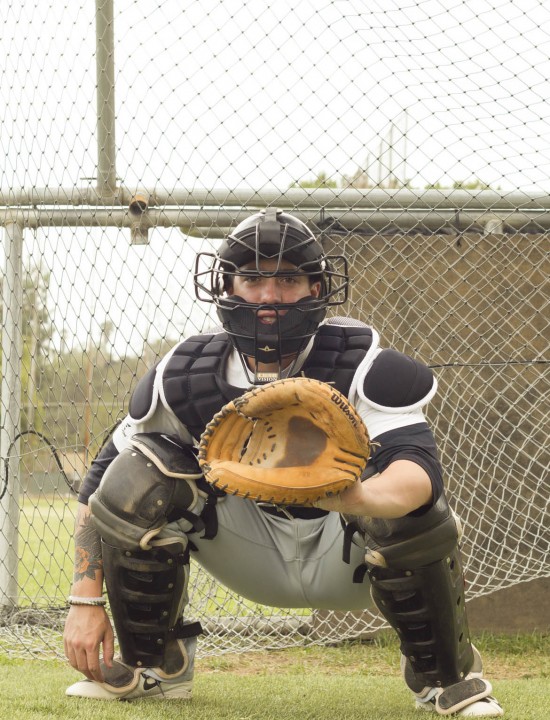 An explosive smack crackles through the air as catcher Tyler Eastman, 20, traps a speeding fastball in his well-worn glove. From the catcher’s box he tosses the ball back before returning to a low crouch. Releasing a short measured breath Eastman concentrates on the next pitch.

The start of the 2015 fall semester marks Eastman’s return to the baseball field. Since childhood his life had been a blend of hockey and baseball. Throughout high school Eastman played as a right wing for the LA Hockey Club. However, he resigned from the team after an odd play from the opposing team gave him a concussion.

“Everything happens for a reason,” said Eastman. “I had had concussions before but that [last] one was the game changer.”

For a year Eastman remained removed from the sports he loved. Despite his efforts, Eastman felt an absence in his life.

“I felt like a part of me was missing,” said Eastman. “I wanted to play sports again.”

He decidedly ended his absence when he tried out for the men’s baseball team at Pierce College in spring 2014. Though he was “not baseball ready” Eastman was one of four players kept out of a group of a 15 person line-up.

Eric Bloom, 28, is the pitching coach and recruiting coordinator for the Brahmas. Once a catcher for Pierce, Bloom knows the mentality a player must have to be in the catcher’s box.

“You’re the one guy on the field that can see everything.” Bloom said. “Not just anyone can catch and be good at it.”

It is the role of the catcher to analyze plays as well as help in directing the team’s defensive plays. They must be aware of a pitcher’s strengths and the batter’s weaknesses. The position is “very cerebral” as Bloom said.

“You have to be a leader out there.” Bloom said. “As a catcher you really have to understand the game and know how things work.”

After redshirting for the Brahmas last spring, Eastman has adapted to his place within the team. Derek Galvin, 20, acts as the teams left-hand pitching specialist. This will be his second season with the Brahmas but his first pitching with Eastman in the catcher’s box.

“Every team has their own guy with a distinct personality that brings people together,” Galvin said. “I’d say he [Eastman] is that kind of person.”

Off and on the field the Brahmas function like a family. In between warm-up stretches and practice, the players lightheartedly tease one another. Numerous jokes are told and stories are shared between the teammates while waiting for Bloom to call up the next pitcher and catcher.

“We’re all a little weird but they’re great guys,” said Eastman. “We’re like brothers out on the field.”

Supplementary to the team’s’ support, though just as pivotal, is Eastman’s mother, Jamie Eastman. A baseball enthusiast herself, she provided ample support when Tyler Eastman decided to pick up the sport again.

“Me being able to play a sport again, I can see that makes her really happy,” said Eastman. “She knew how much I loved hockey and baseball so she was glad when I made the team.”

Eastman speculates that it was also his mother’s’ left-handedness that taught him to be a switch hitter. Eastman adds to the Brahma’s versatility by being able to throw with his right hand yet bat left-handed.

For head coach Bill Picketts, it was a combination of many traits and abilities that made Eastman standout.

“I really liked his swing. His swing wasn’t bad at all,” said Picketts. “He has an amazing work ethic and practices hard to get where he wants to be.”

This extra exerted effort, along with his flexibility as player and toughness, lend to Eastman’s compatibility with the team on the field as well.

“Eastman could play first base, he could catch, or play third base if we needed,” said Bloom. “He’s a versatile player.”

On the days Eastman is not practicing with the team he can be found with his friends or prepping for classes. Although he has chosen communications as his major he has not yet figured out what he hopes to do with the degree. Even so, he is happy with the academic path he has selected.

On the days Eastman is not practicing with the team he can be found with his friends or prepping for classes. Although he has chosen communications as his major he has not yet figured out what he hopes to do with the degree. Even so, he is happy with the academic path he has selected.

“Most people don’t like their speech and debate classes but I love it. I have no problem talking to people so this major fits me,” said Eastman.