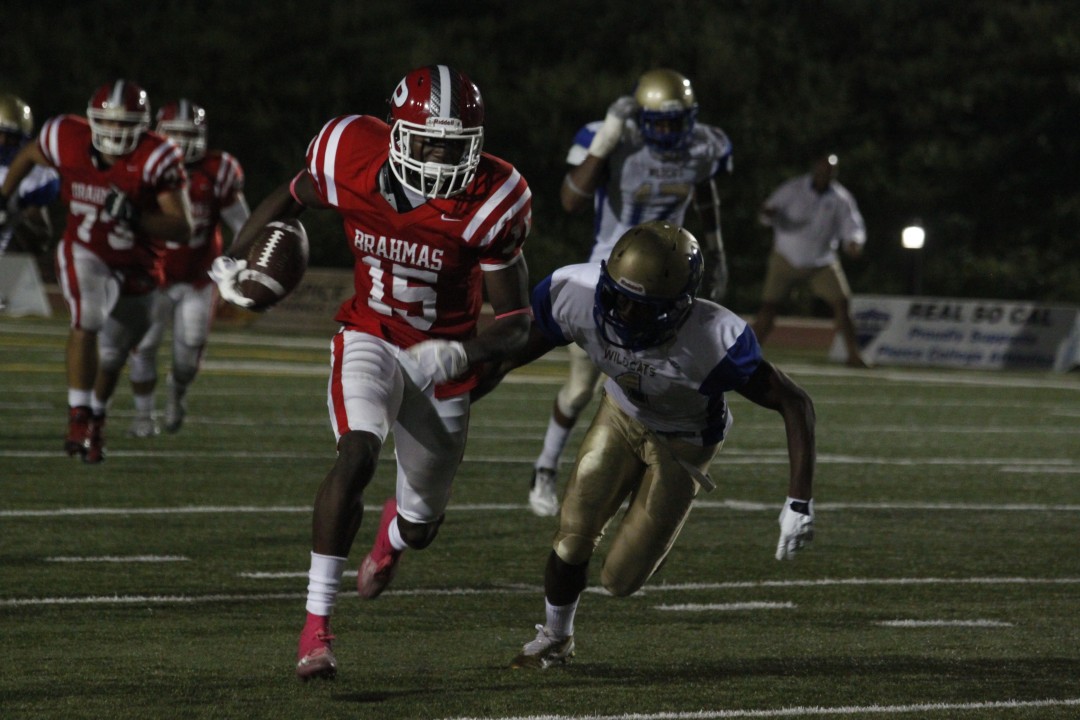 The Pierce College football team made big plays to shut down West Los Angeles College for the first of a two game home-stand.

Pierce opened its first drive at the West L.A. 11-yard line, but sophomore quarterback Sean Smith threw an interception in the end zone.

“It was close in the first half the past couple games,” Smith said. “But we definitely stepped it up in the second half. We came out firing on all cylinders.”

The Brahmas’ defense, which ranked first in the district before Saturday’s game by California Community College Athletic Association, held the Wildcats to only seven points in the first half.

An interception by sophomore defensive back Esdras Simervil at the West L.A. three-yard line gave Pierce the ball back.

“It feels good, I had a tough week at practice,” Simervil said. “I needed some turnovers.”

On the Wildcats’ second possession, sophomore quarterback Jorge Reyna threw his second interception of the night to Brahma freshman defensive back Justin Jhorbisson who returned it to West L.A.’s three-yard line. Sophomore running back Yusupha Foster ran in for the touchdown to give Pierce a 7-0 lead.

Smith started the game with two incompletions on three passing attempts, and one pass was picked off for a Wildcat interception. He went on to connect with sophomore wide receiver Xavier Ubosi deep in Wildcat territory for a first and goal. The Brahmas’ attempted to score, but Foster went down with an injury trying to force his way into the endzone and fumbled the ball for West L.A. to recover.

“We started out slow. We weren’t playing to our potential,” Ubosi said. “But Coach [Sabolic] gave a motivating speech and we played to our best ability in the second half.”

The Brahmas led by seven at the end of the first quarter after each team committed two turnovers.

Midway through the second quarter, Reyna connected with freshman wide receiver Melvin Hughes for the touchdown to tie the game at seven.

As the first half was coming to an end, Ubosi set Pierce up with good field position after a big catch in Wildcat territory. Sophomore running back Calvin Howard was then able to run the ball into the endzone for six points.

“I felt like it was a physical game.” Howard said.

Pierce again intercepted a throw from the West L.A. quarterback for Simervil’s second of the night and Reyna’s third interception.

“Simervil turned in one of the better performances that I have seen,” said Brahmas’ Head Coach Jason Sabolic. “Three interceptions is pretty awesome.”

The Wildcats had possession of the ball to start the second half. Simervil again intercepted Reyna for his third pick of the night and Howard plunged into the endzone to convert the turnover into points.

“The dropped pass that lead to the interception, [in the] start of the third quarter gave [Pierce] all the momentum.” said Wildcats’ head coach Marguet Miller.

Ubosi made a 57-yard catch to set the Brahmas up inside the two-yard line after Pierce regained possession. Penalties forced the Brahmas backward, but Smith was able to connect with sophomore wide receiver Jamere Austin on a 13-yard pass for a touchdown.

The Brahmas led 28-7 early in the third quarter.

Pierce’s dominance continued as the team received the ball. Freshman running back Kyshawn Richards made a 64-yard reception to put the Brahmas in the red zone.

“I think our whole receiving corps deserved some props,” Sabolic said. “They all pitched in and did a fantastic job.”

In the fourth quarter, Reyna connected with freshman wide receiver Daniel Bell for a 28-yard touchdown. After a failed two-point conversion the Wildcats still trailed the Brahmas by 29 points.

While trying to run out the clock late in the fourth freshman running back Corey Wright found the endzone and the Brahmas lead 48-20 after a missed kick.

“I feel it went a lot better in the second half,” Sabolic said. “We came out not firing on all cylinders. They needed a fire lit under them.”

With less than three minutes to go in the final quarter, freshman quarterback Tyler Stevenson completed a pass to sophomore wide receiver Spencer Banks for a 45-yard touchdown to make the final score to Brahmas 55, Wildcats 20.

“I tell [the team], I don’t want to be the team that’s playing against us when we decide to put that full game together.” Sabolic said.
Pierce (3-1) will host the Orange Coast Pirates (2-2) next Saturday, Oct. 10 in John Shepard Stadium at 6 p.m.