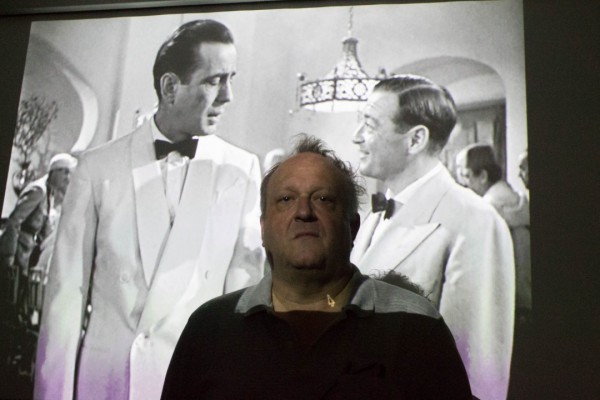 It’s a moment he’ll never forget. Sitting in the front row watching “2001: A Space Odyssey,” a budding film fanatic knew that movies would play a major role in his life.

Today Ken Windrum is a full time assistant professor of cinema at Pierce College. He has been teaching at the school since 1998.

“He is very liked by his students,” said Ida Blaine, director of the Encore program at Pierce, in which Windrum teaches . “They admire his passion for cinema.”

It wasn’t only the sci-fi classic that he loved growing up.

Windrum’s dad took him to see “Lawrence of Arabia” as part of a double feature.

“The second movie was over two-and-a-half hours long. My dad couldn’t believe that I wasn’t getting impatient. I was mesmerized,” Windrum said. “Everyone has a certain art form they tend to love and mine is film.”

His love for films first made him want to be a director. He wanted to be the guy behind the scenes and display his creativity on the big screen.

Windrum began to study a lot of the technical aspects of the business, such as filming on 16 millimeter, during his undergraduate program at the University of California, Los Angeles. He then began to realize that the critical studies classes were what really drew his attention and excited him.

“Would I still direct,” Windrum asked. “In a fantasy world? Where someone gave me $100 million and I could be directing George Clooney and Julianne Moore in a script that was written by Quentin Tarantino, sure it would be a lot of fun. I don’t have a lot of patience with the technical and mechanical parts of the job.”

During his undergraduate education, Windrum wrote and directed a melodrama set in Los Angeles about a woman on the verge of a nervous breakdown.

“My film is still around in 8 millimeter with a 16 millimeter synchronizable sound track in a box,” Windrum said. “I haven’t seen it in 30 years.”

Windrum recalls that his earliest project contained film elements that are very typical of a first-time director.

“I filmed it in color and black and white because I was trying to be artsy,” said Windrum. “I did all the things a first time director does. I did a pointless tracking shot just to do one. I got my friend in a wheelchair because I heard Godard on “Breathless’ put his cinematographer in a wheelchair.”

Windrum believes that teaching the theory and history of film is just as important as participating in the industry.

“People say that those who can’t do, teach,” Windrum said. “That’s a stupid saying, because isn’t teaching doing? I think so.”

He encourages his students to make connections while they’re in school. He wants them to realize that it is not always what you know, but who you know.

“So much of it is getting to have a group of people who you trust and that trust you; work on people’s crews for free and do people favors,” Windrum said. “The social and network aspects of it are what I always stress to them.”

Windrum is also currently revising his doctoral dissertation on American movies of the late 60’s and early 70’s. It is taking a bit longer to write, he said, because he is busy teaching five classes at Pierce.

“He has such a hodgepodge of knowledge of film and television,” said Joe Carter, a student in his intro to screenwriting class. “If there is any class he is teaching I am going to take it.”

Windrum enjoys melodramas and thinks that Hollywood doesn’t know how to make them anymore. He believes the 1940’s were a great time for melodramas.

Windrum, who is a fan of classical filmmaking, believes that film is missing a lot in today’s industry.

“I still think Alfred Hitchcock is still the greatest of them all,” Windrum said. “No matter how many times I see his movies, he had an understanding of how to tell a story by knowing how to move the camera, how and when to cut, when to use a close up and when not to use a close up.”

He also appreciates modern day directors as well. Quentin Tarantino, Martin Scorsese and David Cronenberg are among his favorites.

“I don’t understand why directors today have to use so many close ups and edit so quickly,” Windrum said.

The reason they shoot so many close ups, Windrum said, is because they’re cutting so quickly. He recently saw “Black Mass,” starring Johnny Depp, earlier this week and thought that it was dull and boring.

“Scott Cooper is a dull film maker and the movie is so loaded with close ups,” Windrum said. “It’s like they don’t trust the audience.”

He went on to talk about Michael Bay and how he tries to have as many shots as possible from as many different angles, thinking it looks “cool”.

“I just think of Hitchcock and I just hope that in heaven, Alfred Hitchcock never has to watch Armageddon.”