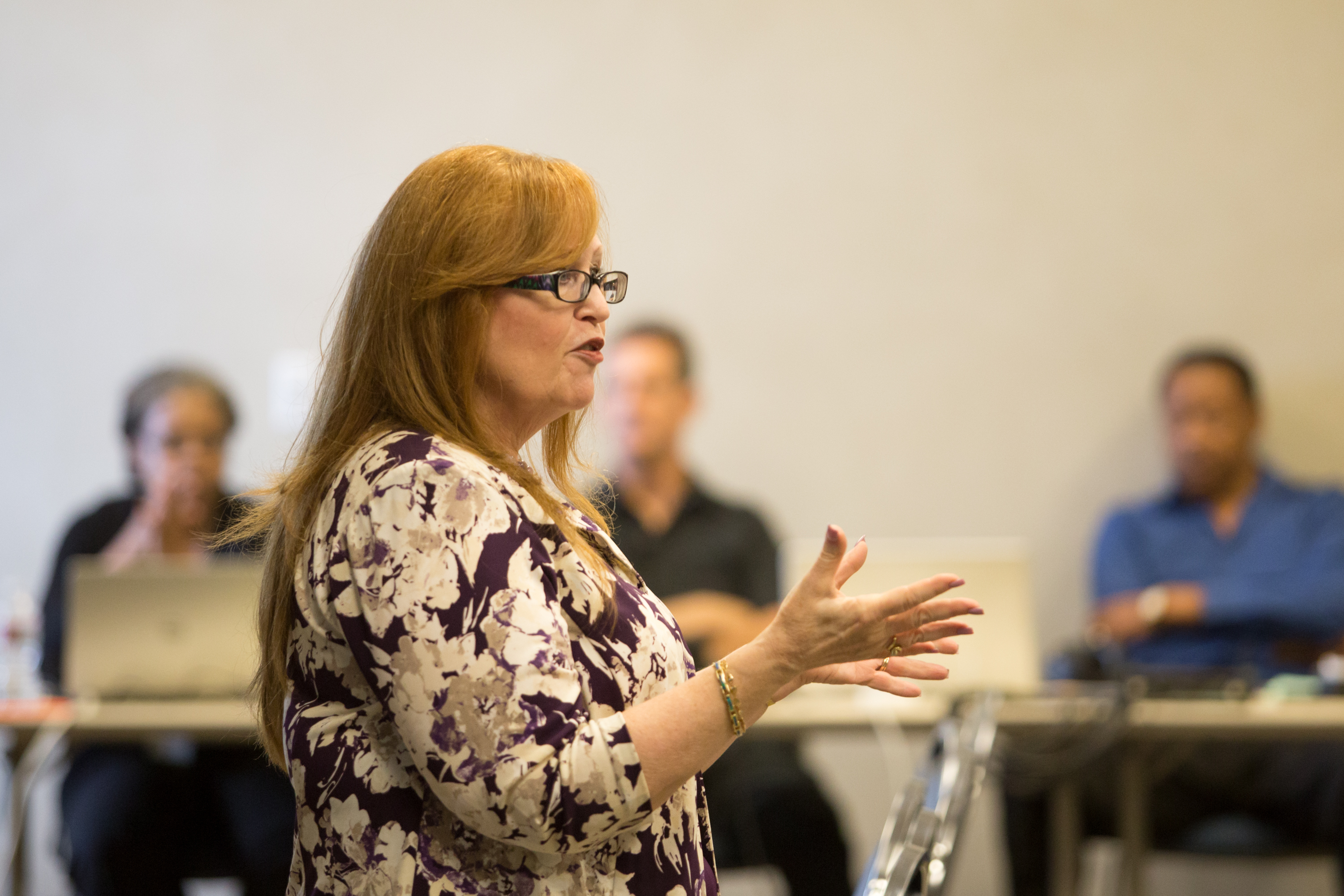 Pierce College President Kathleen Burke spoke to about 50 people at an open forum on the El Camino College campus in Torrance Monday as part of her bid to assume the school’s presidency.

Burke is one of five finalists considered to fill the position held by Tom Fallo, who will retire in February after a 20-year term as ECC president. She fielded questions about her reasons for seeking the position, her relationship with the Foundation for Pierce College, her experience with campus emergency responses and her approach to lengthy construction projects.

Before Pierce, Burke taught art history for 20 years, served as vice president of academic affairs at Los Angeles Trade-Tech College and was president of the Glendale Community College Board of Trustees. She has been president of Pierce since 2010. In April, LACCD Chancellor Francisco Rodriguez requested Burke to take over the position of vice chancellor of educational programs and institutional effectiveness.

The request was withdrawn by Rodriguez on May 4.

Unlike Pierce, which is one of nine colleges governed by the Los Angeles Community College District’s Board of Trustees, ECC is a sovereign campus with a single superintendent-president and a board that deals with one school. The position may hold several key advantages over Burke’s current post, including a greater degree of control over the college.

According to Pierce’s Office of Institutional Effectiveness, the college has seen a steady rise in student achievement during Burke’s term. In the 2009-2010 school year, 801 students received associate degrees and 75 received unspecified certificates. In 2013-2014, associate degree recipients numbered 1,171 and 650 received certificates. Additionally, each year 2009 and 2014 showed a consistent increase in those numbers over the previous year.

“I think [that is due to] the emphasis on completion that’ve been talking about since I arrived,” Burke said. “All I can do as the college president is talk about completion, I don’t do it. That takes the faculty and staff to do that… I take no credit for that, they did the hard work.”

Students at Pierce have shown mixed reactions to the president’s decision to seek the position.

“It’s not a surprise. I mean, I would have left after a year,” said mortuary science major Dolores Stewart, 23. “This school is unmanageable; it’s an animal house.”

Jared Henderson, 20, said he was upset by the president’s possible move and said he felt she has been a good leader for Pierce.

“I am curious about the cause. What could make somebody who seems so passionate about helping the students want to leave,” asked Henderson, a behavioral studies major. “I feel like she might want to be somewhere that her opinion is more likely to be heard [by the school board] than it is here.”

Andrea Sala of the El Camino College Foundation asked about Burke’s experience dealing with other college foundations. which are traditionally separate from their respective colleges and are often intended to provide scholarships and financial assistance to students.

“I just wondered what your experience has been with the foundation at Pierce,” Sala asked. “How you’re involved with them, how you support them, how you promote them in your community and to the campus community as well.”

Burke, whose administration has been at odds with the foundation over both the spending and raising of funds, outlined the issues she has had with the Foundation for Pierce College in her term.

“That’s one of my not-successful stories at Pierce to be quite candid with you,” Burke said. “When I arrived the foundation had a $156,000 loan, line of credit. I have never seen a college foundation that owed money.”

The Foundation for Pierce College recently finished undergoing an external review that looked back through 15 years of financial documents. The results of the review have been released, and coverage of the foundation staff’s responses is available now.

Burke cited the foundation’s “relationship” with the now defunct Farm Center as a large factor in its financial crisis.

“That business was actually flowing money through the foundation,” she said. “So the foundation was essentially functioning as a bank.”

Burke addressed the issue of construction and network upgrade projects at Pierce, some of which have been ongoing since 2010, and how she would avoid those problems at ECC. Unlike Pierce, ECC “recentralized” their program management office “years ago” according to Burke.

According to Burke the contractor at Pierce was debarred before the projects were completed. Of 11 buildings, seven were in what she called “various states of completion” after the contractor was removed. When the contractor left, so did all of the other workers who had been brought in.

“We’re not going to have those issues here at El Camino,” she said. “You have to make sure you have quality contractors and architects in the first place so you don’t run into some of the problems that we’ve run into.”

After last week’s mass shooting at Umpqua Community College in Oregon by a former ECC student, Burke said she “anticipated” the question of campus safety would come up. According to Burke, the most important preventative measure against campus violence is training.

“It’s really all about training, and the training that we provide,” Burke said. “You listen to the reports from the community college in Oregon, you may have heard some of the students who were in a neighboring classroom say they locked the doors.”

Burke said she has “twice given the order to lockdown and evacuate the campus.” However, while there was a legitimate threat in those instances there has never been an active shooter at Pierce College.

The ECC board of trustees is expected to decide the next president in the next week, and a special meeting of the board will convene Wednesday to discuss the candidates.

If chosen, Burke will start her term on or around Feb. 1. It is unknown who would be selected to replace her as Pierce College president, but it took more than a year to hire Burke after her predecessor quit with two weeks notice.