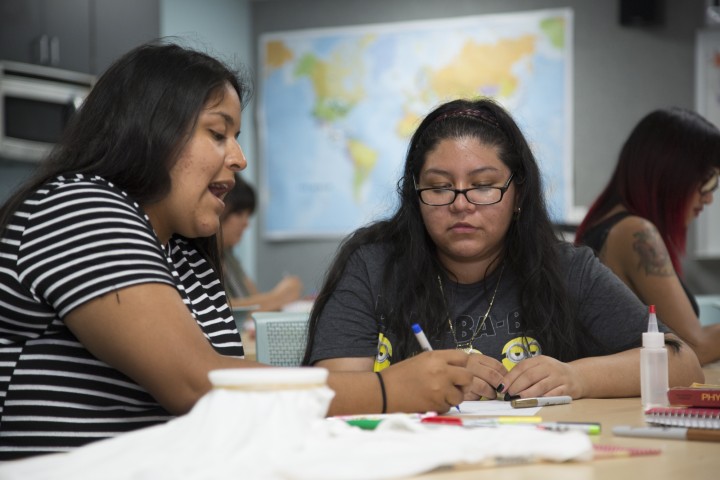 Surrounded by toy kitchenettes and tubs of wooden building blocks, students wait eagerly with notebooks and plain white t-shirts in hand to make sure they garner your attention.

According to Snow, the club has been dormant for several semesters after four years of slow activity, but is now starting up again due to an increase of interest in the program.

“It’s tricky to keep the momentum of a club going when you have a two-year campus,” Snow said. “There’s a lot of opportunities right now in our field and we want our students to be able to tap into that.”

The Child Development Club, which meets alternating Mondays and Thursdays at 12:45, set out to cement the footprints of their organization at their second meeting last Thursday in CDAD 6101. In this meeting, members agreed on a mission statement, decided on how to run elections, and made custom T-shirts to promote their club.

“We could hit up to 50 members, though I’d be very happy if we had two-dozen active members,” Snow said.

The club plans to build networks with child development professionals in the industry by attending various conferences. Members of the Child Development Club will attend a conference called “Fall into Fun” at Valley College hosted by the National Association for Child Development of Young Children. Up to 300 child development professionals will convene to discuss the most pressing matters currently facing the industry and how programs across the country can benefit from new findings, Snow said. According to Snow, the conference is a great place for child development students to meet influential people who may be able to assist them in their educational career.

“I’d like to see them feel confident and gain leadership skills,” Snow said. “They can make a difference in children’s and parent’s lives and network with people in the field.”

Kasandra Rubio, child development major, sits front and center waiting for the meeting to begin. Even though it’s only the second time the club has discussed any sort of business, she said she is positive about what’s to come and was eager to join the club when it returned.

“I think everyone is here for a good reason, so we all have that in common. I think it’ll be a good experience for all of us,” Rubio said.

“I think it has a good start. Eventually it’ll get bigger and bigger and continue after we’re gone. It will become something everyone in the program wants to be a part of,” Divenedetto said.

After a half-hour of group effort, club members put together a new mission statement to suit the club’s new-found energy and future potential.

The Child Development Club’s mission statement is: To make connections in the early childhood and child development community. To network with other students and professionals to stay up to date with current practices and to engage in philanthropic efforts for children and families.

It was then determined that the club would elect its club president, vice president, treasurer and secretary anonymously online via the polling site Surveymonkey.com. The club members will make their case for office in a written post and other members will vote for whoever they think is the most motivated to take on that position.

“The first five years of life are critically important and so we need strong leaders in the field for the better of our future,” Snow said.