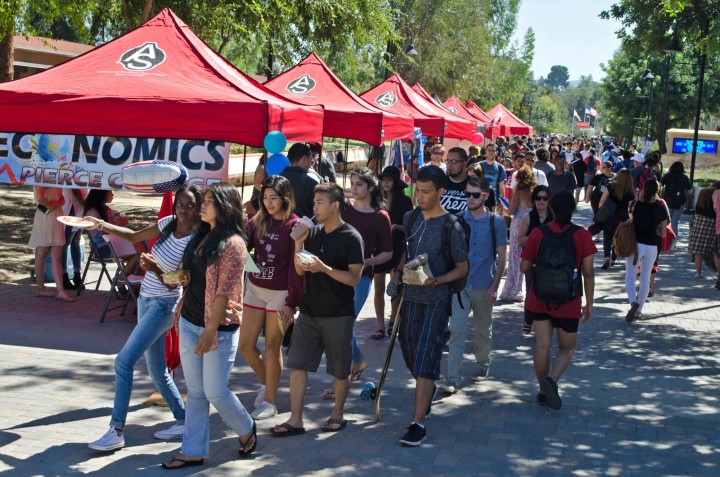 ASO President David Do is optimistic about the Fall 2015 Club Rush. He wants students to understand the purpose behind the event.
“It’s looking pretty good.” Do said. “The gist is to get students out there and clubs out there to let them be known.”
Club Rush was moved further down the mall close to the bull statue and old library.
“The club’s are closer so then you can go from this club to the next club,” Do said.
Do explained that clubs have to chartered before they can have a tent or stand at Club Rush.
Pierce student Kaitlyn Appleton spent some time surveying the showcased clubs and even joined the Debate Club.
“It’s pretty cool,” Appleton said. “It’s neat that they have their little tents set up and you can just walk and pick and choose what you visit.”
Appleton wanted to join debate in high school, but had no such opportunity.
“My high school did not participate in anything debate.” Appleton said.
Some clubs represented at Club Rush were Hillel 818 Club, Pierce Law Club, Out in Science, Technology, Engineering, and Mathematics (OSTEM), Child Development Club, Black Student Union, Phi Theta Kappa, Hiking Club, and the Pierce College Veterans Club.
Clubs had the opportunity to share information with students about their respective clubs.
Jonathan Saltzmen, a member of Phi Theta Kappa, made sure students were informed that Phi Theta Kappa, is an international honors society at Pierce.
“We service jewish students and students interested in judaism and Jewish life,” said Sharon Basch, a member of Hillel 818.
President of the Hiking Club Xavier Fierro said they want people to set goals for themselves, but the Hiking club will help them get there.
The Pierce College Veterans Club sets the club’s focuses very heavily on vets.
“Anyone is welcome to join,” said Alex Miguel, president of the Veteran’s club. “If you are just a vet supporter, we welcome everyone.”
“OSTEM is part of a national society,” said a member of the club, Crystal Adame. “It’s a club geared toward the needs of LGBTQ students in the fields of science, technology, engineering and math.”
ASO Club Council President Carlos Castaneda said he felt that Cub Rush was better than others in the past there were a lot of new clubs that were not chartered before”
“I saw a lot of students were really interested in talking to clubs not just walking by them,” Castaneda said.
For those who may have missed Club Rush, more information can be found through the ASO by visiting the first club council meeting on Oct. 15 from 1 to 2:30 p.m. in the ASO Office under the Library / Learning Crossroads.