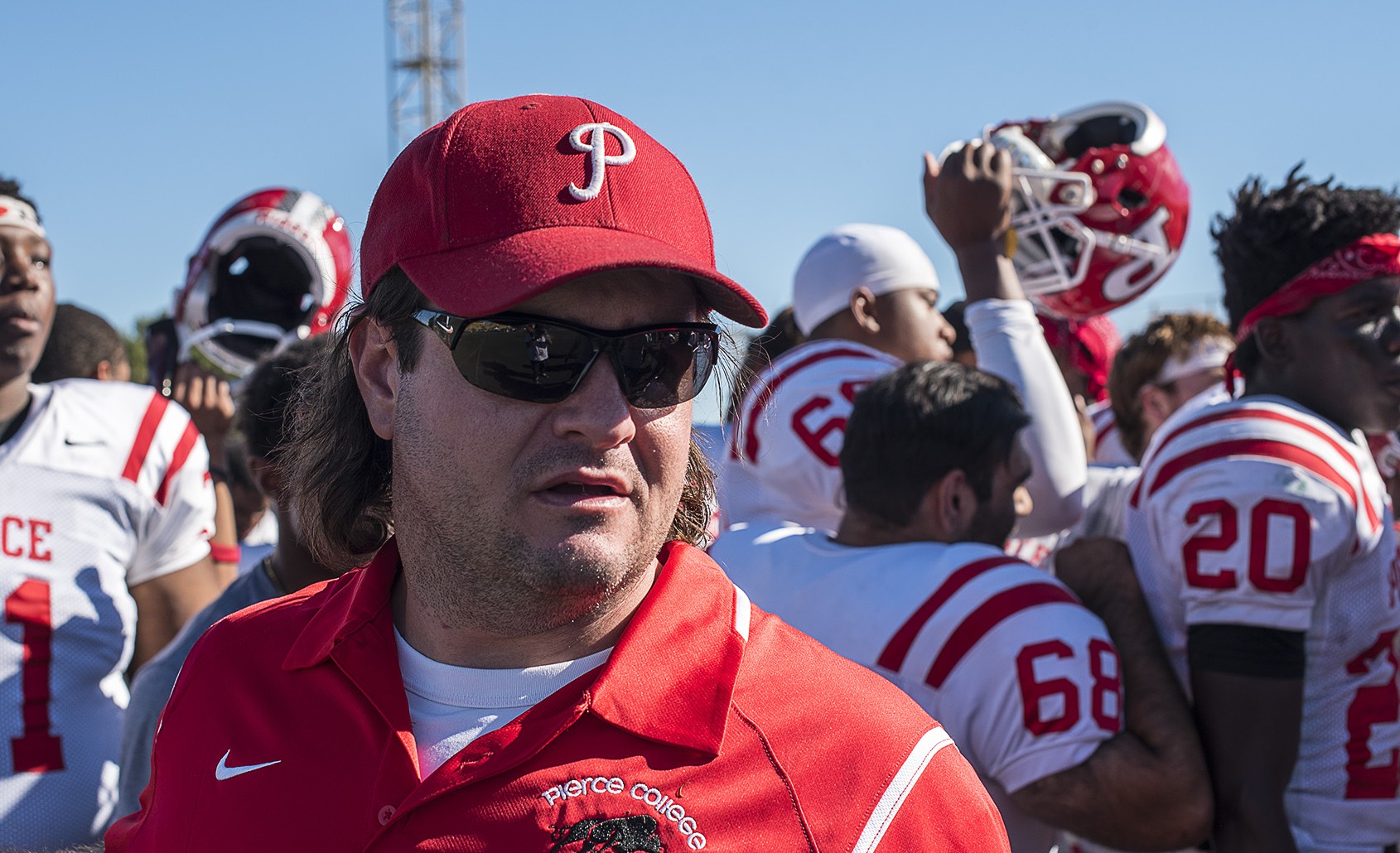 From college football fanatic to full-time special teams coordinator, Bob Bognet is more than just a coach. Working a regular 9-to-5 never seemed to be in the cards for him. His passion had always been sports from a young age, more specifically football.

Bognet loves football so much he even TiVo’s live games and watches them back.

“He’s a die hard Penn State fan. He TiVo’s the games every week and after our games he will go home and watch it at midnight like it’s live,” Head Coach Jason Sabolic said.

Previously a volunteer coach for the Pierce College football team, Bognet was brought on as special teams coordinator, and has never missed a day of work.

“He’s been here for five years, never missed a day,” Sabolic said. “He deserves his job.”

Bognet was a kicker and a punter in high school. He was also a kicker for a DII, Shippensburg University, before transferring to Pennsylvania State University.

“Some people are lucky enough to know at 18 what they want to do,” Bognet said. “I wasn’t.”

When Bognet moved out to Los Angeles after graduating from Penn State, he got a job in the entertainment industry. He has worked numerous jobs in the business, from being a production assistant to working security. After a few years in the industry, Bognet felt as if something in his life was missing.

“I was enjoying life, but I felt that there was something missing,” Bognet said. “I knew how much I missed football. I knew I wanted to coach. So I finally pulled the trigger and started volunteering.”

While at Penn State, Bognet had the opportunity to meet coach Joe Paterno. Bognet said he gets a lot of his coaching style from Paterno. His philosophy was to develop athletes and help to make them well-rounded citizens in the community as well as to become an amazing athlete. Bognet often stresses to his student athletes to make good choices not only on the field but also off the field.

“He’s very patient. I was a linebacker in high school and never kicked in my life,” said back-up kicker for the Brahmas, Edward Avila. “He took his time with me.”

The team’s long snapper Nik Fields says he has a very close relationship with Bognet.

“I probably know him the best, this is my second year with him. He teaches me a lot about special teams. He knows a lot about the game,” Fields said.  Knowledge of the game isn’t the only thing that Nik admires about Bognet but it’s also his sense of style.

“He’s a character. The clothing he decides to wear to practice. It’ll be 100 degrees in the middle of the summer and he will still be wearing longs sleeves and a t-shirt with pants,” Fields said.

“He likes to fool around with us in practice and pick on us,” kicker Oscar Gonzalez said. “He is nice to be around and he is there for us. He helps us more on our kicking.

Since being hired as part of the coaching staff this year, Bognet believes the Pierce College football team is on the right track for greatness.
“It was a rough year last year but we’ve turned it around,” Bognet said. The football team’s overall record is currently 5-3 through 8 games.