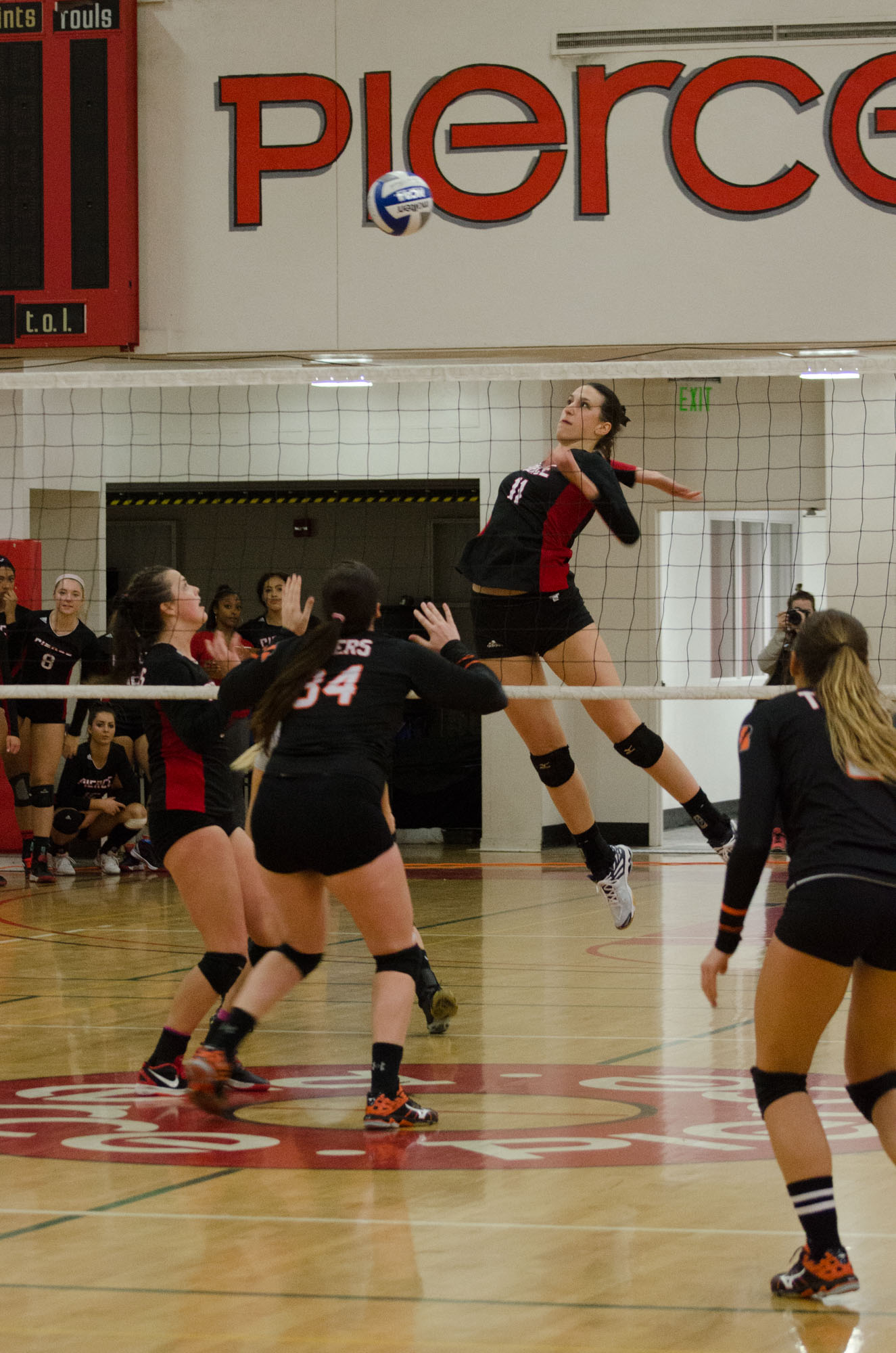 The Pierce College Women’s Volleyball team defeated the 15th ranked Riverside City College Tigers in a three set sweep, moving on to the second round of regional playoffs.

The first set began with Pierce showing why they were the number one team for so much of the year, and how they got their fierce reputation. The Brahmas immediately established a lead, and never let go. Leanna Schott put in valuable work, contributing three blocks and an ace­­­­­­­­­­. Zaire Dartis delivered the block to finish off the Tigers at 25-13, and left Riverside with some serious strategizing to do.

It was clear, entering the second set, that whatever strategizing Riverside had done, it was giving the Brahmas a shock. The Tigers rocketed to an early 4-1 lead over Pierce. The Brahmas fought back, but ultimately had to call a timeout when they were still down at 9-7. Unfortunately, the time out did little to help, as Riverside continued their onslaught until Tamia Files shut the tigers down with a kill that turned the set on its head. It was all uphill from there, for Pierce. After clawing back up the scoreboard, The Brahmas finished the set with a 6-0 run on the Tigers, winning 25-21.

The pressure was on for Peirce to make it a clean sweep, but despite being ranked higher than the Tigers, the Brahmas were not discounting them, having seen what they brought in the second round. Pierce came out strong, building a commanding lead, the likes of which were seen in the dominative first set, but Riverside wasn’t going to let it happen so easily.

Riverside made a 4-0 run on Pierce, putting them up 10-9. Valentina Krivokapic’s kill brought Pierce back into the game, tying the set 10-10. From there on, the teams traded points, keeping a close, mostly tied game for the rest of the set. A stand out in the set was Dartis. Dartis had four rally-ending kills that wore down the Tigers to let Pierce ultimately make a quick 3-0 run to with the set at 25-23, and win the game.

Nabil Mardini, head coach for Pierce knew this game would be closer than many thought.

“We played a good team, especially defensively. You know our girls fought through and through, and in both second and third sets, they had their work cut out for them. We played to our strengths and pulled through,” Mardini said.

Starting Pierce outside hitter, Dartis felt confident going into the game, but always knows to stay on her toes.

“We don’t underestimate our opponents, but I’m always confident in our team to win, even though I think my performance was below average, overall,” Dartis said.

Riverside City College Head Coach Monica Hayes-Trainer could be heard rallying her team throughout the evening, but was more somber afterwards. Although it wasn’t the happiest outcome for the Tigers, Hayes-Trainer still felt optimistic.

“We were excited just to compete against a great team and a great person like [Mardini],” said Hayes-Trainer. “I felt great, knowing we made them sweat enough to call time-outs a few times, and we have no regrets. It’s always hard to lose, but this was an accomplishment in itself.”

According to Mardini, Pierce starting outside hitter Shari Volpis did not play in the game due to a possible concussion suffered in a car accident. It is unknown how long Volpis will be out of commission.

Pierce President Kathleen Burke sat courtside for the game to show her support for the team. Burke said she always loves coming to games, especially playoffs.

The Brahmas will face Mira Costa on Saturday, Nov. 28 at 6 p.m. in the South Gym.