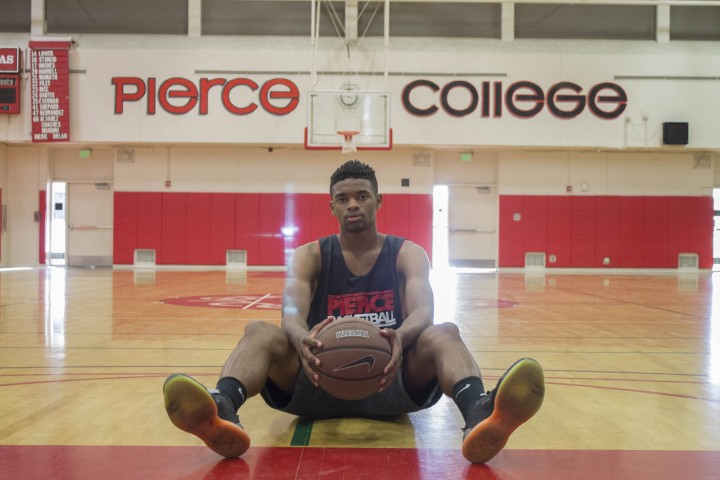 Hard work really does payoff for 20-year-old basketball player Kaelan Hicks. Hicks did not officially play basketball until his freshman year in high school, and has worked his way up to grabbing attention from universities across the nation.

Hicks started playing basketball in Oak Park High school where he started on the freshman team and played in varsity in his last two years.

No offers were sent towards Hicks after high school, so he played in the Amateur Athletic Union with his high school coach Charles White.

“After my senior year, he decided to have me come on over,” Hicks said.

Hicks came over to Pierce College along with coach White, and felt his game has improved with the help of the coaching staff.

“I feel like I’ve gotten better throughout the years at Pierce,” Hicks said. “They developed my skills, my game, and I’ve gotten stronger.”

Hicks is majoring in communication and also feels the benefits of Pierce in an academic standpoint as well.

“I feel like it’s a great opportunity for me,” Hicks said.

Hicks started out as a defensive specialist in the forward position throughout his high school years, and has expanded his game to be more offensive oriented in the guard position.

“Offensively I improved a lot,” Hicks said. Ball handling and shooting definitely improved, and my offensive awareness improved a lot.”

Hicks has an older brother that is currently playing for the NBA D-league team Fort Wayne Mad Ants in Indiana, and feels he also has a chance to play basketball professionally.

“Definitely that option is not out of the way,” Hicks said.

Improving oneself in their skills is always something basketball players strive for every day, but for Hicks, winning is the main priority.

Close friend and teammate Kenny Stenhouse appreciate what Hicks brings to the team.

“He’s a great leader and plays hard all the time,” Stenhouse said. “He keeps our head right and me, I’m not the calmest person, but he’s always talking to me and calming me down.”

Hicks is being looked at by universities such as University of Great Falls and Biola University, and coach White believes he deserves the recognition.

“He works hard,” White said. “He’s a good student, and you gotta be a student athlete, which he is. He’s one of those kind of kids.”

Pierce basketball head coach Ed Babayan also believes Hicks deserves what he is getting, and believes he is a true leader.

“We’re just trying to narrow down which schools are the right fit for him,” Babayan said. “We appreciate everything he brings to the table for the last two years.”

This year’s basketball team is not the biggest with the tallest player being 6’7, but the team feels they can go far with their heart.

“That’s what we’re banking everything we do on, is our heart,” Babayan said.