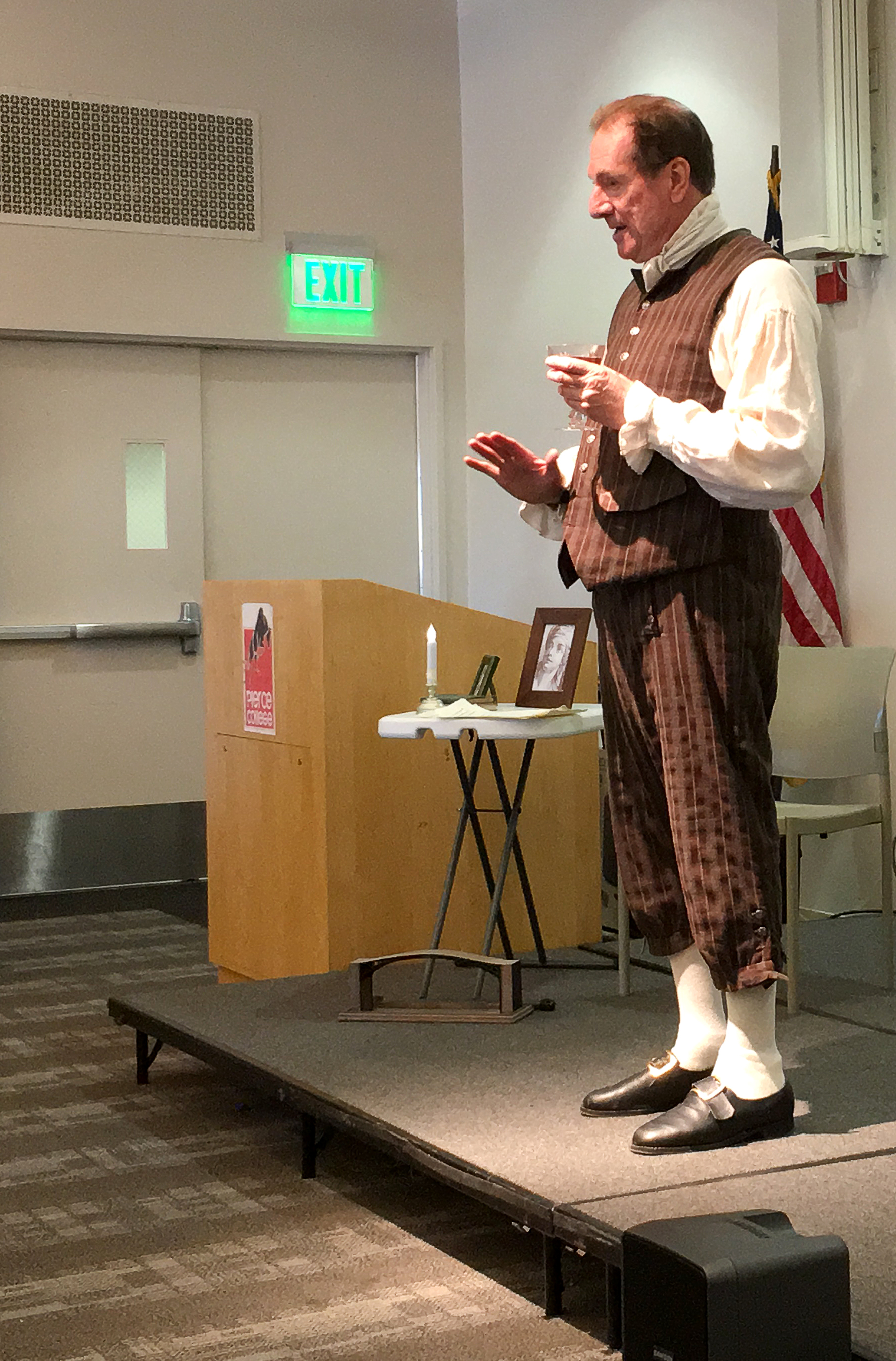 An antique table adorned with a quill pen is placed on the stage before the crowd. A candle, powered electrically to mimic the form of light most commonly used in the 1800s, and the recorded sound of church bells echo throughout the room. For a moment, the Great Hall is transported to the 1700s to host its guest speaker, Thomas Paine.

Faculty members from the department of history, philosophy and sociology, along with funding from the Dolores Huerta Labor Institute, featured a play of Thomas Paine at the Great Hall on Monday, Nov. 30.

“We brought Ian who plays Thomas Paine,” said Shigueru Tsuha, professor of sociology. “He wrote this play himself and he’s been performing this play around the district and it was time to bring him to Pierce.”

Thomas Paine, one of the Founding Fathers of the United States, lived during the 18th century and authored the book “Common Sense,” that inspired rebels to declare independence from Britain.

“It took a year [to write the play], but what actually happened was I got a fellowship from the city of Los Angeles to write the play,” said Ian Ruskin, who plays the role of Paine. “As part of that, one year from when I began, I had to perform it.”

Ruskin, who is both an author and actor, has performed his plays at many community colleges within the district. Among the other historical figures Ruskin performs are Harry Bridges and Thomas Paine.

“He was the one, truly radical Founding Father,” said Ruskin about Paine. “He always was sort of on the outside, but his vision was far advanced compared to the other Founding Fathers, in terms of equality and democracy.”

Paine was against the idea of owning slaves and favored the abolition of slavery, which was an unpopular idea to have within states that allowed ownership of slaves. Paine also held the idea that all men should be allowed to vote.

“I like Thomas Paine as I read about him in my class,” said Imanuel Dukovny, who is a part of the History 11 class that attended the play. “He did an awesome job doing a one man play. I really enjoyed it.”

Plans have begun to bring Ruskin back to Pierce and perform another play sometime next semester at the Great Hall.

“Next semester I plan on bringing him to play Harry Bridges,” said Tsuha. “Bridges was a labor leader and a different play but Ian will be back.”