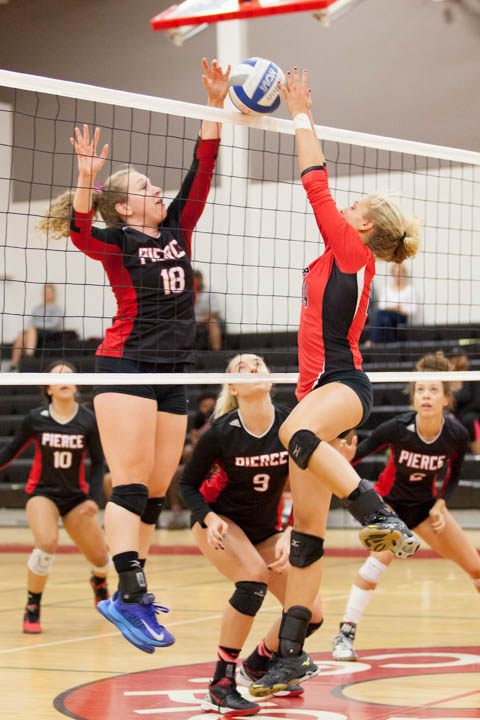 Pierce and Santa Barbara City College played a clumsy game with many errors committed by both sides. The game was played to four sets.

“Even though we won, we were just off,” coach Nabil Mardini said. “It was an ugly match, but we found a way to win.”

Pierce played aggressively in the first set, quickly managing a six-point advantage over their competitor, 9-3, by the first timeout.

Sophomore setter Hayley Alvarez had many kills in the first set and was the game’s standout player, according to Mardini.

At one point, Santa Barbara was able to bring Pierce’s lead down to three points, but the Brahmas took the first set with an eight-point advantage.

Pierce was unable to bring this same energy to the second set.

The team failed to take advantage of many of their shots, with several missed serves and uncontrolled spikes landing out of bounds.

Alvarez said the Santa Barbara Vaqueros were able to take advantage of Pierce’s mistakes in the second set.

The Vaqueros were able to accumulate points with tips that the Brahmas could not get to on time, which was a key component for Santa Barbara’s win of the second set.

The third set began very similarly to the second. The Brahmas could not get the ball to their setter, and were often scrambling.

Santa Barbara’s blockers often tipped the ball, which lead to them scoring a point when the Brahmas could not return the ball over the net.

At one point, the Vaqueros had a seven point advantage, 18-11, but couldn’t hang on to their lead.

The Brahmas slowly began scoring again, and once they solidified their momentum, they were able to take the set.

Santa Barbara’s Coach Ed Gover said his players were successful in certain areas of the game, but were unable to recover after the Brahmas took the lead in the third.

“We let things slip in the middle of that third set,” Gover said.  “[The Brahmas] put a lot of pressure on you, and our girls have to make sure they hold their composure. [Pierce] started making some errors and then it was our turn to make some errors.”

With newfound power, Pierce entered the fourth set with energy similar to that of the first.

The Vaqueros were affected by the return of Pierce’s controlled shots and began making mistakes. Many of Santa Barbara’s shots landed out of bounds and their defense was not as strong as it had been.

Despite being in the lead, the Brahmas were still making messy plays in the final set, with spikes and sets going into the net.

Pierce’s next match will be at College of the Canyons on Wednesday, Oct. 5 at 6:00 p.m.