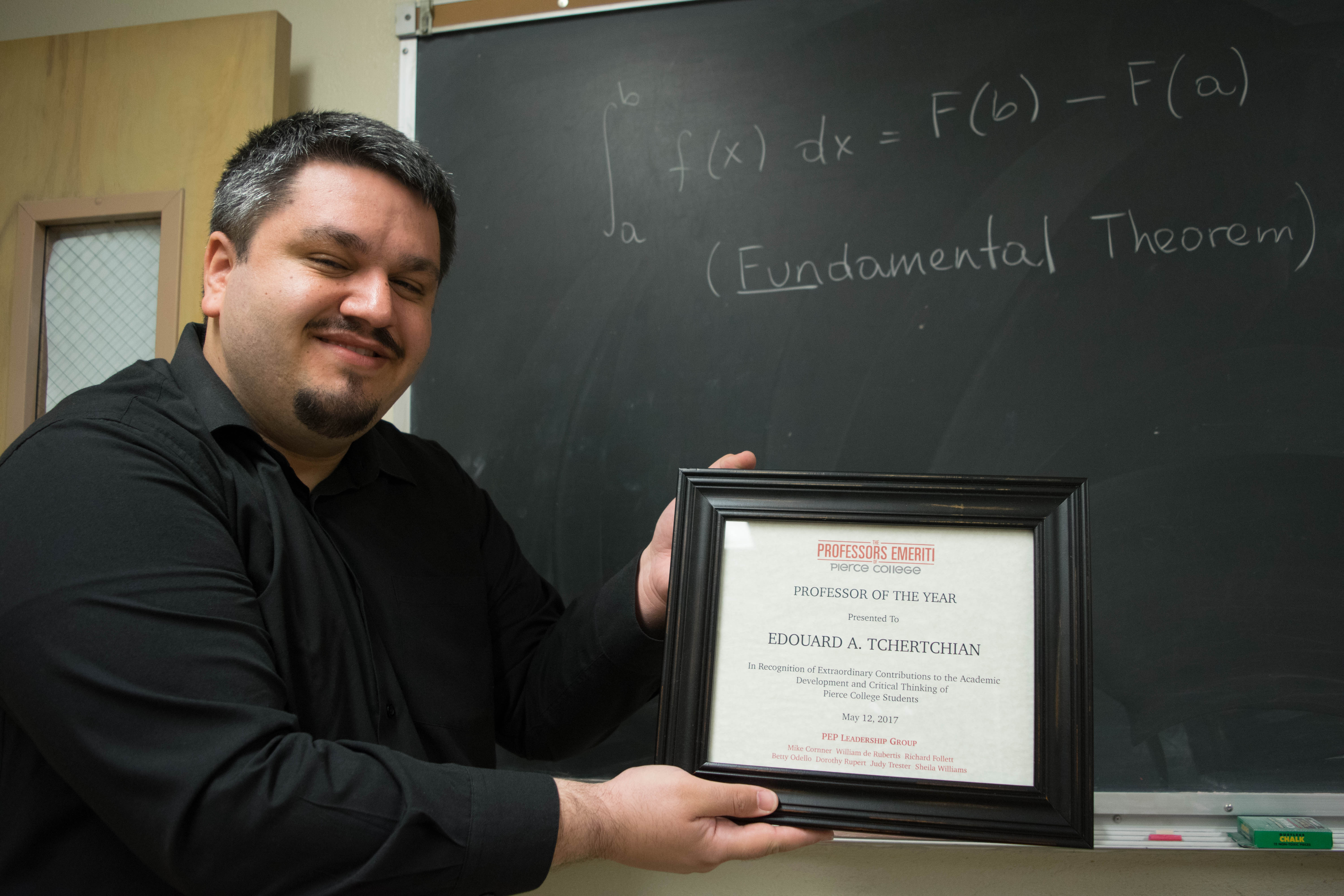 Most of the time, when a teacher spots a student on Facebook during class, they get reprimanded. However, during math instructor’s Edouard Tchertchian’s class, he just wants to make sure they’re on the class’ group page.

A former Pierce student, Tchertchian has approached teaching with fresh ideas, humor, and with a focus on helping students succeed. Working in both the classroom and the Center for Academic Success (CAS), he has been awarded Professor of the Year 2017.

Tchertchian describes the experience of receiving an award from those who guided him in his own education.

“Having been a Pierce student myself, it’s a significant honor to be recognized by peers who used to be my teachers,” Tchertchian said.

In the five years since he began teaching math at Pierce, Tchertchian has become vice chair of his department. Using innovations such as Facebook to his advantage, Tchertchian creates a classroom that is interactive and technology-friendly.

Crystal Kiekel, director of the CAS, works alongside Tchertchian. She recognized his unique strengths as an educator and expressed that his openness to new ideas contribute to what keeps him top of his game.

“Professor Tchertchian is flexible enough in his thinking to see possibilities,” Kiekel said. “That’s not something you see in everybody. People are often comfortable with the way they do things, and sometimes change is intimidating. But there are some people that embrace that intimidation, and use it as part of the process for growing. Tchertchian is open to new ideas, and he thinks carefully and critically about potential opportunities.”

“He is very student-centered,” Kiekel said. “I think one of the reasons Eddie is such a good fit here is that he really thinks about the students, and he does not make decisions based on his own personal preferences or comfort level.”

To receive Professor of the Year, a candidate must first be nominated by a fellow faculty member. All nominees fill out a survey to better inform the Professional Development Committee, who then votes, and chooses a recipient. Tchertchian said he felt intense emotions upon receiving the news that he had been selected for the award.

“It was really exciting,” Tchertchian said. “I was deeply honored. It was very emotional, and a great feeling to have. It meant a lot to be nominated by my peers. It makes you feel appreciated that the hard work you put in for your students and the campus pays off.”

Tchertchian recognizes colleagues who have helped guide him as an educator at Pierce.

“I’ve been blessed to work alongside people like Crystal Kiekel and Bob Martinez,” Tchertchian said. “I owe them a great deal of gratitude. Both have been tremendous mentors and have helped shape who I’ve become professionally.”

Tchertchian is known for taking advantage of advances in technology to aid his teaching style. He credits Martinez for guiding him on many creative approaches in the classroom. Among different techniques, Tchertchian utilizes a methodology called “flipping the classroom”, in which students essentially do the homework in class, and go over lecture and study materials on their own time. Tchertchian considers this approach to be beneficial in creating a deeper bond with students.

Tchertchian has made students’ inclinations to go on Facebook something useful in their learning experience.

“Most professors get mad if they see a student on their phone during class,” Tchertchian said. “Whereas, one of my students might be on their phone posting questions about the lecture to the class’ Facebook page, or perhaps forming a study group.”

Kiekel said that Tchertchian’s approach to teaching provides a great climate for students to learn.

“Eddie has that combination of someone who is deeply student-centered, flexible and critical enough in their thinking to adapt to new situations and try new things,” Kiekel said. “It helps foster a rich environment in which innovation, collaboration and rebirth happens every single week.”

Yeranuhi Semerdjian, fellow math professor at Pierce, thinks Tchertchian was a great choice for Professor of the Year.

“I think it’s well deserved,” Semerdjian said. “He works very hard, and cares a lot about his students. I think it’s about time.”

Tchertchian’s journey to becoming an educator was molded by both a passion for math and for helping others. When he decided to pursue his master’s degree, Tchertchian was settled on teaching at Pierce.

“Once I knew I was going to be a community college instructor, I wanted to come back to the place that helped shape me, and pay it forward,” Tchertchian said. “When I was interviewing to work here, some of my former teachers were even on the hiring committee.”

Working in the CAS, Tchertchian hopes to guide math tutors who sit in the same seats he once did.

“At the CAS, we hope our students come back to be our colleagues,” Tchertchian said. “I’m a living example of that, because I was a math student, and a tutor here at Pierce. That was my first job in education. Now I hire the tutors.”

Tchertchian loves being able to help students on their path to greater knowledge. He expressed that guiding them towards achieving their goals is his ultimate high as an educator.

There’s nothing like seeing students succeed and overcome the barrier of self-doubt,” Tchertchian said. “That’s the best feeling. It’s the cherry on top.”