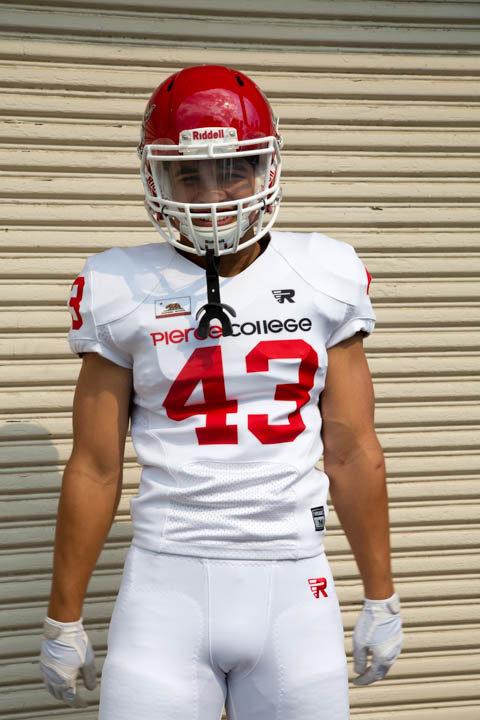 With the new season set to kickoff, the football team were given a surprise on Friday when a new uniform format was revealed.

The all white road uniform was designed by Defensive Coordinator Torry Hughes and linebacker Steven Barragan. According to Hughes, the uniform is called the “icy-hots.”

When Barragan walked into the meeting room suited up it was the first time the team had seen the new design.

“We were just trying to make the best look for the team,” Barragan said. “Unveiling it today, making it with coach Hughes some months back, I think it made a pretty good impact on the team.”

The jersey features small details such as the California state flag on the front chest, the Pierce College seal on the back collar and the words “find a way,” which Hughes says is the motto for the season.

The team also has two new brahma logos for the season, which Hughes has named Booker and Damian.

“Branding your football program is very important,” Hughes said. “All the bulls that we got we found from artwork from other departments on campus.

Booker sits on the new helmets, replacing the traditional P that had adorned the side of the helmet previously.

Damian will be featured on the team’s travel shirts.

According to Hughes, the two bulls have two different purposes, Booker the public face of the team and Damian with an inner-team meaning.

The Brahmas will don their new uniforms in their first game of the season when they visit the Moorpark Raiders on Saturday. Kickoff is scheduled for 6 p.m.