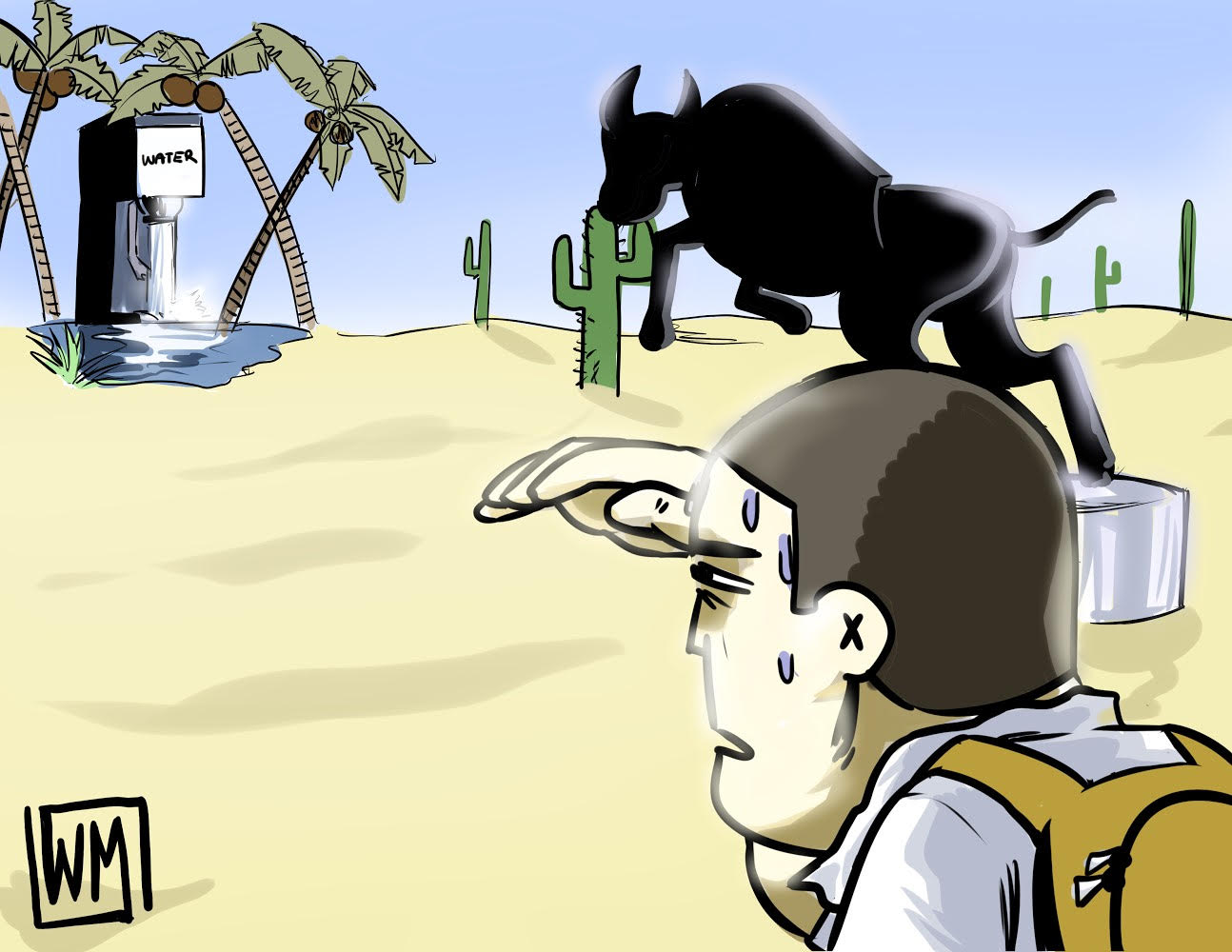 Walking through triple-digit temperatures, the sun beaming down on your skin, the dry air chapping your lips as the beads of sweat drip. No, it’s not the Mojave, it’s not the Savannah. You’re just walking to class.

Pierce sits in one of the hottest parts of the Valley, and water is, at times, not easily accessible. In times of extreme heat, the school should provide students and faculty with water throughout the campus.

Setting up a few, let’s call them hydration stations, across campus to provide water for those in need would be a simple and vital solution. Two in the Mall, one in the Village and one up on the Art Hill would successfully cover most of the foot traffic across campus and provide a vital resource.

Funds could be allocated by ASO for the 20 or so days a year that the temperature is over 100 degrees. Volunteers could operate the stations, dispensing ice cold water from jugs to those that are in need.

In the first week of the fall 2017 semester, according to the Pierce College weather station, temperatures reached record highs.  Practices were cancelled and games were delayed on campus. Aug. 28 saw the mercury reach 111 degrees. Shade is a commodity on this campus, and the main walkway from one end to the other, the Mall, is almost completely sunbathed throughout the day.

We all sweat. And while you may enjoy earning that sweat when working out, no one likes sweating just from a short walk. Medicinenet.com reports that a brisk walk may generate up to 16 ounces of sweat per hour to cool the body. This lost water needs to be replaced.

According to a report from CBS, up to 75 percent of Americans suffer from chronic dehydration. This may be due in part to misinformation.

Most of us have heard about the “eight and eight” rule, where the recommended water intake is eight eight-ounce glasses throughout the day. This adds up to just under two-liters. According to the Mayo Clinic, the adequate intake is nearly double for males at 3.7 liters and 2.7 for women.

Water in the vending machines across campus cost $1.75. To properly hydrate on campus throughout the day, it could cost the average student nearly $10.

That is, of course, if the machines are working at the time. The first day of the fall 2017 semester, vending machines in the Village were not working. This is an all too familiar site. Machines are constantly down, and sometimes not refrigerated, adding another obstacle to those on campus staying hydrated.

Yes, there are traditional water fountains around campus. But with a student population of over 20,000, most of whom have classes at the same time, when exactly is a student supposed to be able to stand in front of one of these fountains to properly hydrate?

Dehydration has some serious adverse health effects. Fatigue, dizziness, confusion and irritability are all symptoms of dehydration, according to the Mayo Clinic. None of those things provide for educational success.