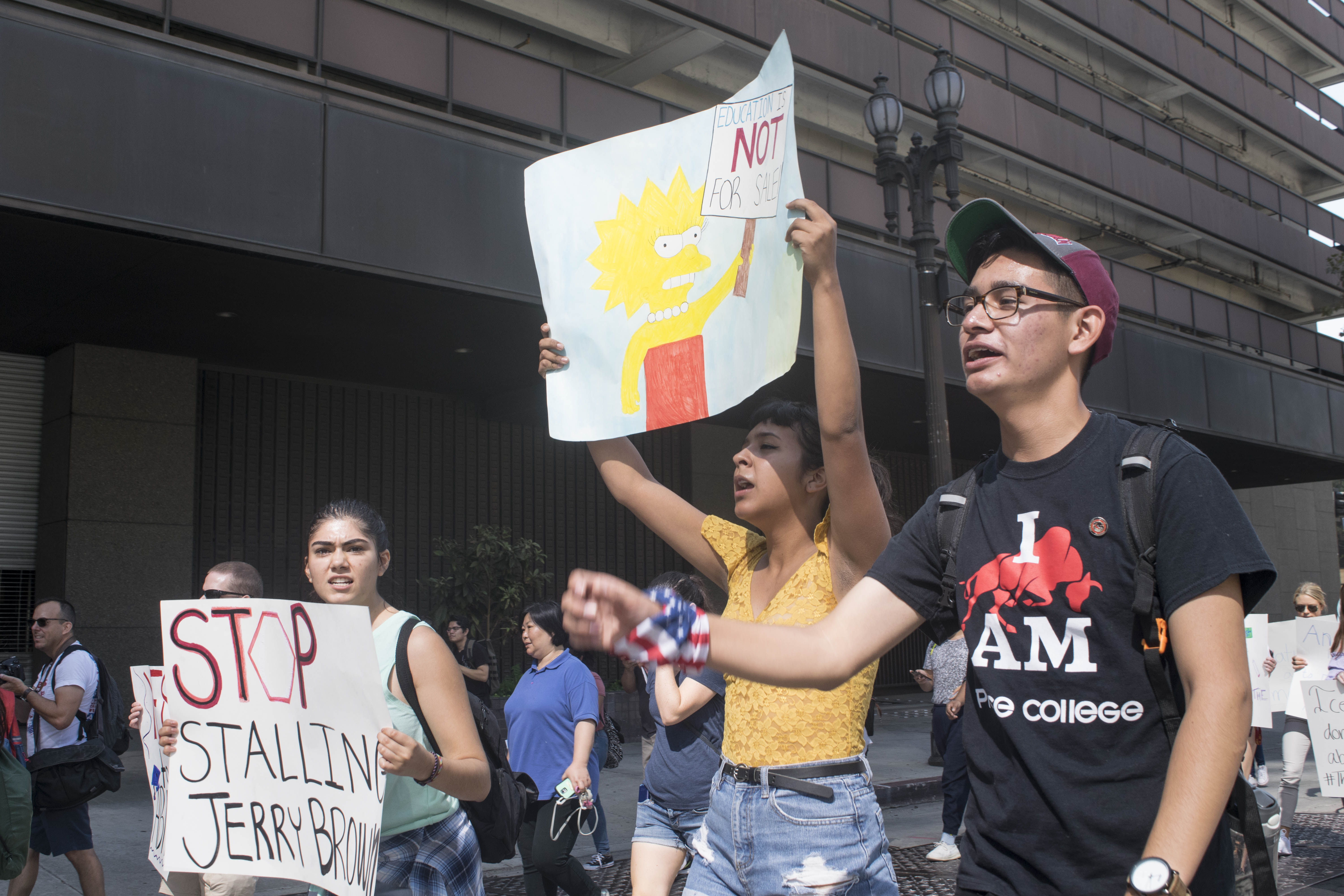 Angelenos, including Pierce students, marched down Hill Street in Downtown Los Angeles in support of Assembly Bill 19, which would make college education free for one year.

The bill is sitting on Gov. Jerry Brown’s desk awaiting his approval or veto.

The march began at Pershing Square and ended at City Hall, where organizers and participants made their speeches about the future of affordable and accessible higher education.

Students marched down the street with posters, chanting, “Sign the bill,” and “Education is our right.”

Associated Student Organization President Efren Lopez attended the march because he believes education should be available for everyone.

“I’m at the march because I think one of the fundamentals of upward mobility is higher education,” Lopez said. “The bill that they’re advocating here is just sitting on the governor’s desk, ready to sign.”

Lopez said it’s important for the government to provide education to students who can’t afford it.

“Some people say it could be a human right or a great necessity, especially in today’s society,” Lopez said. “It’s very important for people who can’t afford it or don’t know how to go about it, that it’s an option for them to go and move up in the world and get the proper education.”

Chair of the Community Welfare Committee Gisela Tarifa attended the march to support free education for herself and for students in the future.

Tarifa wants her siblings, and anyone, to have access to education in the future and not have to worry about affording college.

“I don’t want my little brother or my cousins, anyone that’s going to take that next step out of high school, to not feel able to obtain an education. Everyone needs an education,” Tarifa said. “Knowledge is power. If you’re not educated, if you’re not aware, you don’t know how to take the next step in life.”

Student march organizer Gavin Pierce said he hopes this march will show how much free education means to those in need.

“This march is in support of AB-19, and our goal is to get eyes on AB-19, because right now, it’s just sitting on the governor’s desk. All he has to do is sign it,” Pierce said. “By publicizing that and gathering the public support for it, we can really push Gov. Jerry Brown to actually sign that.”

Pierce said the passing of this bill would be a major stepping stone toward free education in California.

“And once that happens, millions of students in California are given free tuition for their first year at community college,” Pierce said.

Pierce said he thinks Brown has not signed the bill because he is waiting to see if it get’s the support it needs.

“I think this event is going to show that yes, there is a need for it. Yes, there are people who are going to fight for it,” Pierce said.

Once the march headed toward City Hall, participants started to line up to speak.

“We need to engage with millennials. We need to do more for voter turnout. We need to make sure that our voice is present,” Demyan said. “We will fight with the urgency that we need to have when we’re talking about issues that matter the most to us.”

Demyan said there are not enough student voters. Only 60 percent of millennials are registered to vote, compared to 78 percent of baby boomers and nearly 90 percent who are 70 years or older, Demyan said.

“It’s really important that we’re present at events like this, and that we’re electing millennials to office so they can represent us and our issues,” Demyan said.

Assemblymember Miguel Santiago spoke at City Hall and said that he is fighting for education rights for the future generations.

“Give us that hope. Give us a quality education that isn’t going to put us in debt for the rest of our lives,” Santiago said. “What we are fighting for is a better future than the generations before us, and if we were to do anything for our kids, for our community, to get educated people, we know we can encourage people around us to go to college.”

Watch a video of this march by clicking here.