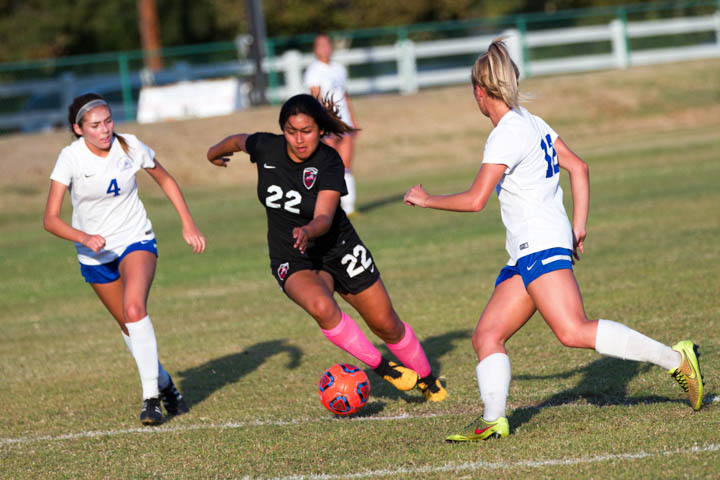 In an injury-prone game, the Santa Monica City College Corsairs got the upper hand as they edged out the Brahmas 1-0 in the first conference game for the team.

Injuries made the Brahmas’ first conference game a difficult one, with a 1-0 loss to the Santa Monica City College Corsairs.

As part of Breast Cancer Awareness Month, the team wore pink socks to show its support for the cause.

In addition to not having midfielder Adriana Sosa for the rest of the season, the team was also without forward Leslie Jolon, who was injured this game.

Goalie Brianna Jacobo was put to the test early on, making a double save to prevent the Corsairs from scoring.

The game was stopped late in the first half due to Santa Monica’s forward Chrystal Dorado sustaining an injury. She was benched for the rest of the game.

In the second half, the Corsairs picked up where they left off, as midfielder Josseline Espinoza fired a shot from outside the 18, forcing Jacobo to make another save.

The Corsairs took advantage of their opportunities, and forward Daysi Serrano scored to put the conference leaders ahead.

Brahmas’ midfielder Jennifer Veliz tested Romero, who was forced to push the ball out for a corner kick. The team had many opportunities to score, but they weren’t clinical.

Head Coach Adolfo Perez said that his team had a hard time scoring and was frustrated by the wasted opportunities.

“We worked all week. We had 19 throw-ins. That is impossible,” Perez said. “We mistake achievement for activity or activity for achievement. We were better than last week, though.”

Perez said that his team is in the same predicament they were in last season, but they managed to win conference.

“We lost our first game last season and then ended up winning conference,” Perez said. “We are hoping to be the same this year. It’s going to be a little harder. We have to find ways to score. There is no excuse.”

Perez said that there is intensity in these types of games, and the team made the same mistakes it had made in previous games.

“We keep allowing the same goal. We don’t look over our right shoulder. We have to work on that. There is nothing much you can do if it keeps happening over and over,” Perez said.

Pierce’s forward Tylee Low said that the team has to keep improving, but they are coming back from injuries.

“We just have to keep growing. We only had 14 on the roster today. There is nothing much we can do,” Low said. “Once we work on our conditioning and our strength, it will be a lot easier to move the ball and get where we need to be.”

Low is optimistic that the team still can win conference because of their talent.

“We still can win conference. We just need to keep our heads high. We have a strong team, and as long as we do that, we can come back. We did it last year,” Low said. “We did it last year with even worse numbers.”

Cruz said that the team had a lot of emotion for this game because it was the first game in conference.

“I think toward the end, I wouldn’t say we’re giving up, we were just emotional coming into this game. We were on the emotional side instead of the focused side,” Cruz said. “We didn’t finish our chances and they did.”