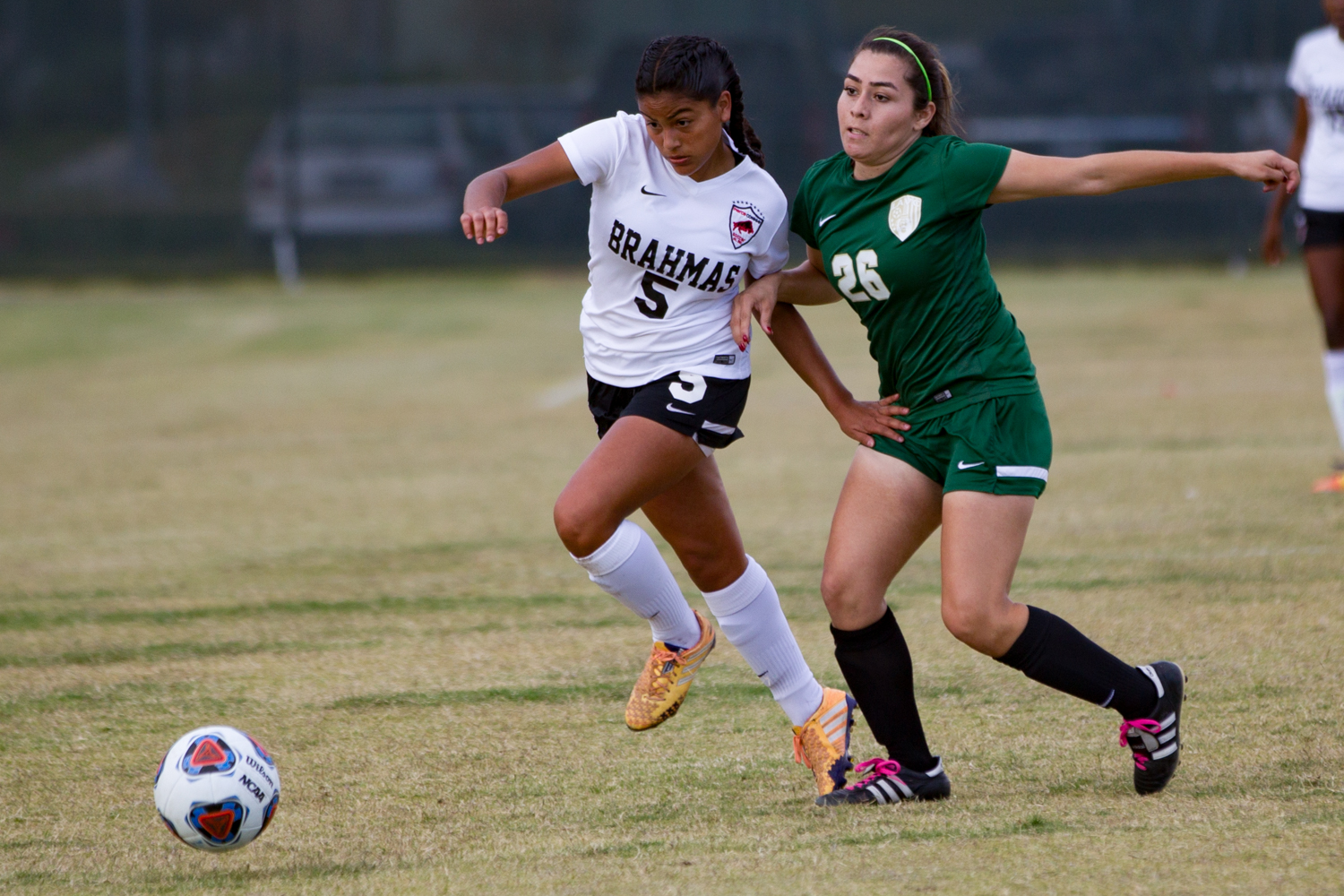 The soccer team earned bragging rights against crosstown rivals LA Valley College with a 4-0 victory at Valley on Friday night.

Pierce came into the game with a 7-4-3 overall record against a team that had won its previous two conference games despite being 4-9 this season.

The teams began the game playing defensively, which was evident by the fact that only Valley managed to get a shot in the first ten minutes.

Pierce, however, struck first in the 14th minute on a headed goal from Layla Bravo. A cross from the right wing was met by a charging Bravo to beat the keeper right down the heart of the goal.

However, the play ended in an injury to Bravo, who collided with the Valley keeper and stayed down for a couple minutes.

She was able to walk off the field, but was subbed out to tend to an injury to her thigh.

Bravo was upset after the game because she thought that the injury occurred due to poor judgement by Valley’s goalkeeper.

“I was going toward the ball, and the goalie came straight at me. She didn’t go to the ball at all,” Bravo said.

Bravo, who had a bandaged leg after the game, explained that she was in pain, but expects to rest over the weekend and play in the upcoming fixture at West LA College on Tuesday.

Bravo’s goal swung the momentum in Pierce’s favor, and the team did not turn back.

The offense pressured the Valley defense and beat them on runs through the middle and on the wings, and the Valley backline struggled to counter with its offense.

A second goal was scored by Esmeralda Guzman in the 29th minute on a strong individual effort, in which she overpowered the Valley backline and broke through the middle past two defenders for a poke shot past the incoming Valley keeper.

“It wasn’t an easy goal. I had to get through a few defenders and toe poke it, but I was really proud of that. It felt really good,” Guzman said.

The Brahmas did not stop the offensive pressure and Jennifer Veliz added a third goal in the 33rd minute on a high, looping shot from outside the area.

One minute later, a Valley counter attack created a scoring opportunity for midfielder Karla Lopez, and she snuck past the last Pierce defender and went in on a one-on-one with Pierce goalkeeper Brianna Jacobo.

Jacobo shined with a great defensive play by coming off her line to smother the attack and deflect the ball wide right to keep the momentum going for Pierce.

The team took a commanding 3-0 lead into the half.

Pierce continued to control the tone of the game and added to their lead in the 69th minute on a cross from the left wing that was met by an Irene Reyes header at the far post.

Valley pressured late and threatened to spoil the Pierce clean sheet with a free kick in the 89th minute that was saved by Jacobo.

A penalty was called on Pierce defender Tylee Low as she came down in the area with Valley forward Danielle Tilton.

Tilton stepped up to take the penalty, in what would be the final play of the game, but failed to convert as she put the shot over the crossbar.

The Brahmas came away with the 4-0 win against the rival Monarchs.

The win meant more than a rivalry win for goalscorer Guzman because she had history with Valley College.

“I wanted to come out here and beat Valley really bad because I came here, and in the last week, I transferred over to Pierce,” Guzman said.

Head Coach Adolfo Perez knew that the game meant a lot for his goalscorer, and he was glad to see her leave her mark on the game.

“The irony is that one of the girls that scored, Esmeralda, was going to come here, and did her whole summer here, and on the 15th she came to Pierce. For her to come and score a goal, it was awesome.”

The strong offensive was a positive for the team, but Perez also wanted to highlight the shoutout preserved by Jacobo. He said that she also had extra motivation.

“Valley’s assistant coach used to be her high school coach, and they did not have the best relationship, so I think she had extra focus. She was extremely motivated,” Perez said.

The soccer team will once again be on the road for its next game on Tuesday, Oct. 24 at 4 p.m. against West LA College.