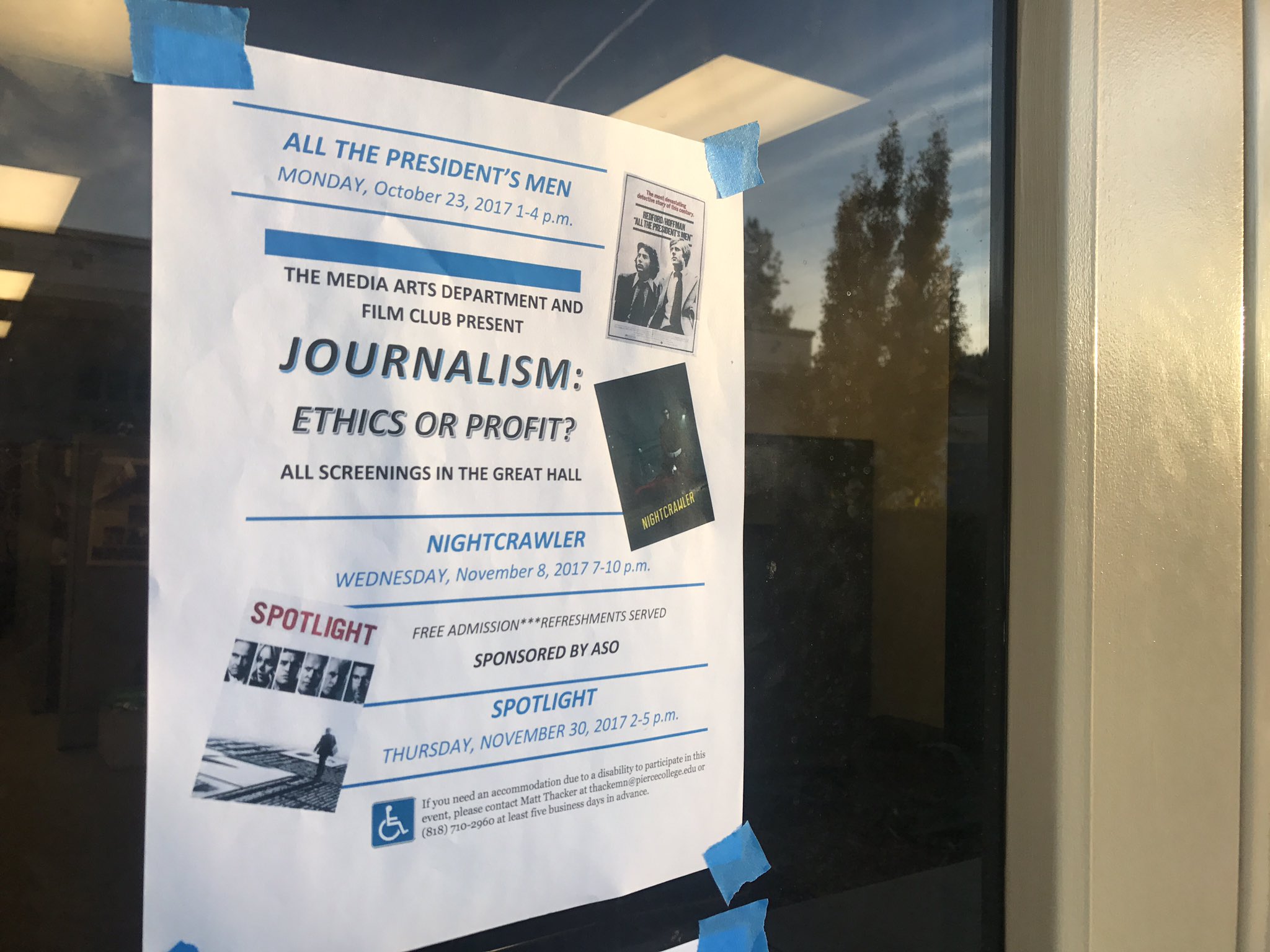 When it comes to exposing the truth, some people will sacrifice their lives to do so.

The film “Nightcrawler,” directed by Dan Gilroy, will be screened on Wednesday, Nov. 8 at 7 p.m. in the Great Hall by the Media Arts Department and the Film Club to bring attention to the unethical issues in journalism and news.

The film screening will be followed by a panel of Pierce instructors, who will lead a discussion on the purpose of ethical journalism and the problems unethical journalists present to the industry.

The panelists for the screening of “Nightcrawler” are assistant professor of journalism Tracie Savage, instructor of psychology Jennifer Moses, Chair of Media Arts Department Jill Connelly, and instructor of English Brad Saenz.

Ken Windrum, adviser of the Film Club, said the film’s theme about unethical journalism is the reason “Nightcrawler” was selected for the screening.

“If you’re going to do films about ethics, you have to show some where the ethics are really problematic,” Windrum said.

The main character in the film shows up at crime scenes with a camcorder and a police scanner to capture “really grisly, gory and juicy footage,” said Windrum, to sell the content to local news companies.

The protagonist has intentions of revealing the truth to audiences watching the news, but begins to “blur the line” when he begins withholding evidence from authorities to get the best story.

“It’s an example of the worst journalism ethics” Windrum said.

“Nightcrawler” was well liked among the panelists and the Film Club.

“Several people brought that movie up with a lot of enthusiasm,” Windrum said.

Windrum said students who attend the screening will think a lot about what is news and what is not.

“In society, we seem to think everything that is on the TV or Internet is news” Windrum said. “You start to realize this whole thing is exploitative.”

Savage said that “Nightcrawler” discloses the “dark and gloomy side of the industry” by showing what stringers and freelance journalists do to get information and footage from crime scenes.

“As a journalist for 30 years, you’re going to find unethical journalists in every industry,” Savage said. “There will be people so determined to make a buck, that they won’t stop at anything to achieve their goal.”

Due to budget constraints, Savage said that many news companies have had to reduce their staff and resort to stringers to shoot videos for them.

Savage said the protagonist, who is a stringer, is “crossing the line by tampering with evidence and going to crime scenes where they don’t belong,” which she said presents a danger to journalistic credibility.

Students who attend the screening, Savage said, will learn about poor journalistic behavior and how to avoid becoming an unethical journalist.

“As a journalist, your credibility is everything, and you swear to be honest and not manipulate information,” Savage said.

Savage said that when journalists step out of bounds like in “Nightcrawler,” they are violating the journalism code of honor.

The panelists leading the discussion about the ethics of journalism after the screening will use their educational background to provide different perspectives on the film.

Communications student Juan Lopez, 20, said he thinks the “Nightcrawler” screening is necessary to show that there are people out there that are dedicated to their work, and how hard they’ll work for it and how low they’ll go to get the truth.

“We need people like that sometimes, because it exposes the reality of working in the news industry,” Lopez said.