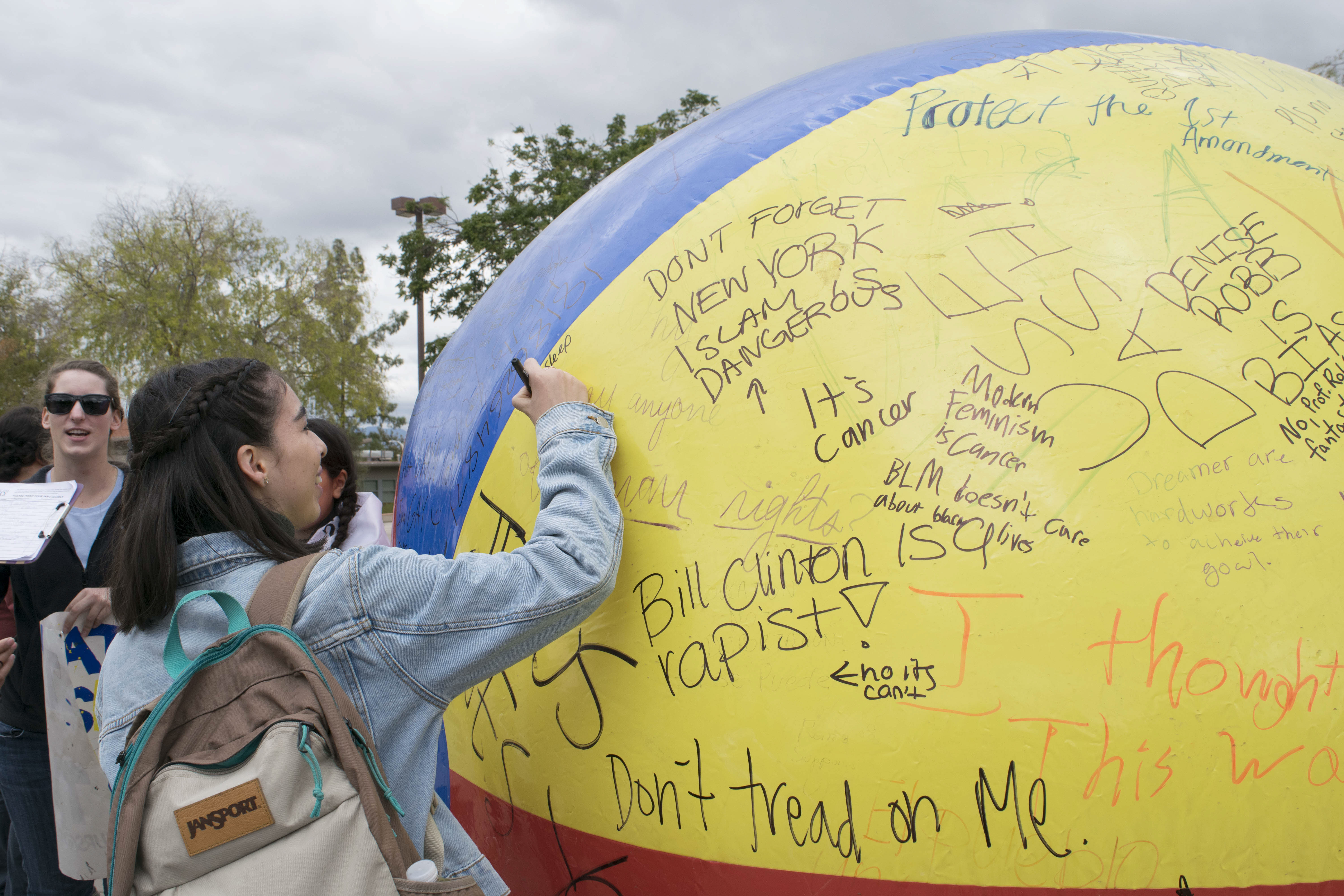 These were some of the messages students wrote on the Free Speech Ball the Young Americans for Liberty set up for students on Thursday, Nov. 2 on the Mall.

Young Americans for Liberty President Tahmineh Dehbozorgi said they organized the Free Speech Ball to protest against the free speech zones on campus.

“We want to bring awareness to freedom of speech on campus because we think it’s important,” Dehbozorgi said. “And in different college campuses, there’s arbitrary laws that are applied so students cannot speak freely.”

Dehbozorgi said she wants students to feel like they are able to speak freely, and by bringing out this beach ball, they can say whatever they want.

Dehbozorgi said former Young Americans for Liberty President Kevin Shaw was passing out constitutions outside the Free Speech Area to recruit for the club when administration asked him to leave.

“They refused to give him any information, so that’s how he started the lawsuit. We believe that our speech is not limited to a very tiny spot, which is very small compared to this huge college campus,” Dehbozorgi said.

Dehbozorgi said that after the lawsuit, they wanted to let students know what was going on by organizing free speech balls for students to sign and organize club meetings that students are able to attend.

“All we want to do is bring awareness that this is an important issue,” Dehbozorgi said. “Usually free speech in LACCD colleges are very tiny; ours is tinier than a stamp if you put it on a map. It depends on how they enforce it.”

Students walking on the Mall stopped to read the messages on the beach ball. Some were reading “I love Trump” and “I do not support DACA” and were surprised with some of the messages that were written.

Joanna Flores, a deaf studies major, was walking out of her class and saw the beach ball and said she doesn’t agree with that the intent.

“I understand that everyone has their right to say what they want, but sometimes words could hurt people,” Flores said. “People who have confederate flags, they can do what they want, but people can get offended. Yeah, you have the right to do what you want, but they won’t feel comfortable around you.”

As students left messages on the ball, Pierce College sheriff’s deputies drove down the Mall and asked students who organized the Free Speech Ball. Deputies did not approach the club members or ask them to put the ball away.

As students walked by the Mall, many wanted to see what the beach ball was. Some passed by without asking, others stopped and were given a marker to write a message.

Communications major Peter Stfleur saw the beach ball as he was coming out of class and wanted to see what it was about.

“Free speech is important. We need to know what people want to say. Different people have different things to say, so I think it’s very important,” Stfleur said.

Stfleur said free speech is important, but he still thinks it can hurt feelings.

“What if the person who get’s their feelings hurt has something else they said that hurts someone else’s feelings, so it’s either or,” Stfleur said.

Young Americans for Liberty coordinator, Lauren Dziedzic said she wanted to make students feel comfortable about writing anything they want on the ball.

Student Antwoine E was walking down the Mall and saw the beach ball, but he didn’t want to leave a message on the ball.

“I’m not opposed to it, but it’s freedom of speech. It’s all how you interpret it,” E said. “It’s what you care about. If you want to wear that, ‘I voted for Trump,’ I can’t say anything about that.”

Correction on Thursday Sept. 9 at 9:09 a.m. Kevin Shaw was passing out the constitutions outside the Free Speech Area.