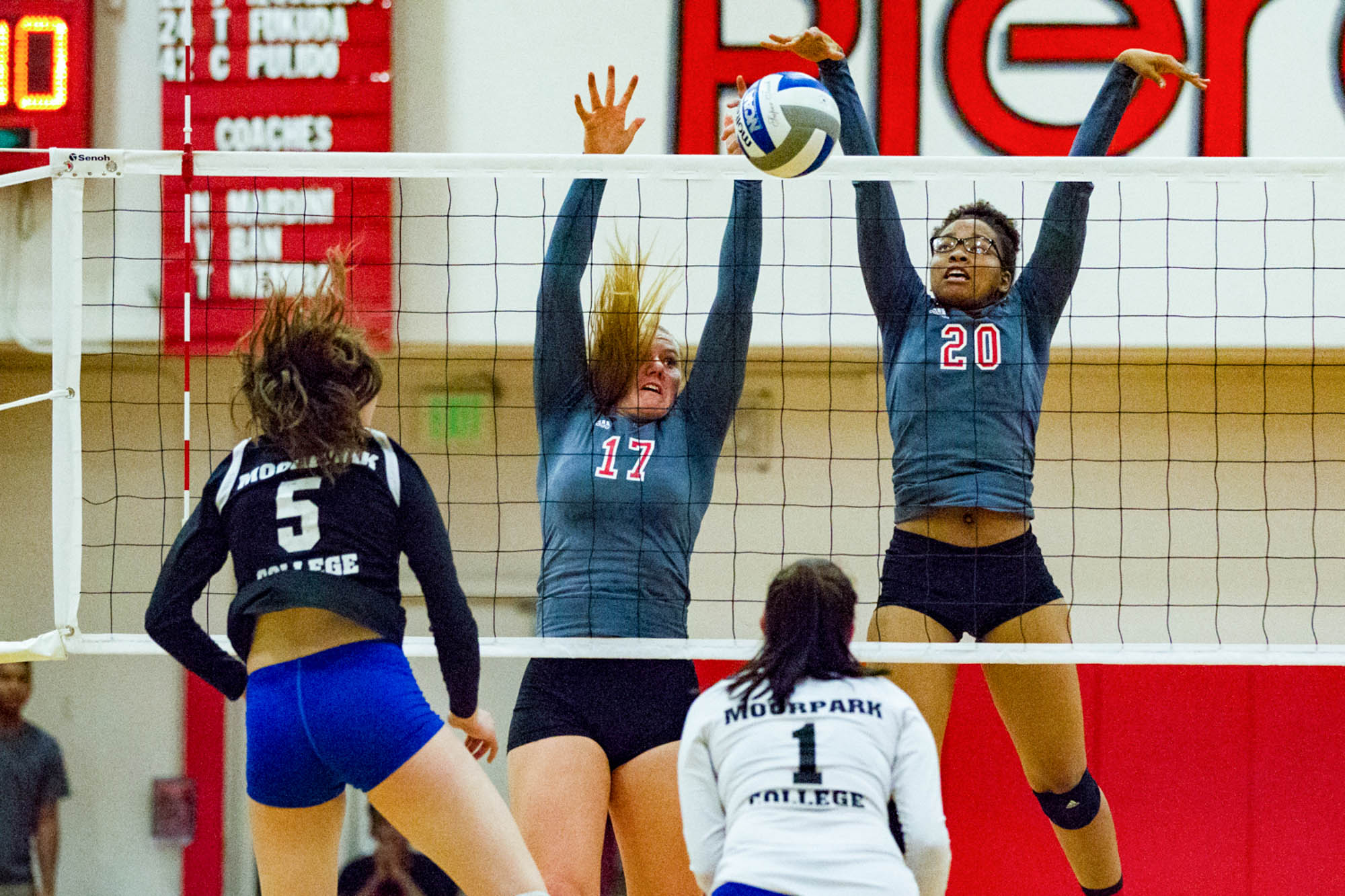 The Brahmas left it all on the court Tuesday night, and they needed to to defeat the Moorpark College Raiders in a five-set emotional win, advancing to the second round of the regional playoffs.

“We definitely had a little bit of a roller coaster, a lot of ups and downs but overall we were able to work together and it was just great,” Kacy Hele said. “I think that our nerves caught up to us and we weren’t playing for each other which as a program is something we strive to do.”

In the second set, the Brahmas displayed a healthy rotation of the ball and dominating offense with Shari Volpis and Hele raining spikes in Raiders territory while the defense stayed on top of the ball with brick wall blocks from Cario Harrell. The Brahmas trailed the Raiders for most of the second set but closed the gap, taking the second set 25-20.

“I’m really proud of the team, I think it’s the first game we really played actually together, and that to me is just the biggest success,” said Volpis, women’s volleyball team captain. “We need to score more in transitions, and going line of approach on the block so we can make it easier for our defenders.”

Brahmas started to slow down in the third set and Moorpark took the lead early on. Pierce’s defense struggled to block out the Raiders, and small mistakes resulted in the Raiders taking the third set 25-15.

“The girls did such a good job, it’s a gutsy win and it wasn’t pretty all of the time but I’m very proud of them,” head coach Nabil Mardini said. “That to me is how you play, coming back from playing ugly volleyball to taking the win.”

The Brahmas needed to turn up the heat, and they showed up during the fourth set. The set was point for point, back and forth scoring between the Brahmas and Raiders. Pierce had the set at game point 25-24, but Moorpark came back to even the score. The Brahmas secured the next two points, pushing the match to a fifth set.

In the final set, both teams laid it all on the line, with the knowledge that at the end of it all someone was moving on as another had to end their season. The scores went point for point up until they were tied 6-6, then the Raiders started to heat up taking a two point lead over the Brahmas.

“Obviously no one likes a loss, but the girls were showing a lot of fight and competitive spirit,” said Adam Black, Moorpark College volleyball’s head coach. “Hats off to Pierce, they definitely made some plays at the end that earned them the win, they are a tough team that doesn’t crack often, we got them to crack a little bit but not enough.”

The Brahmas would put another point on the board putting them at game point match, and took it all the way home earning the 15 points they needed to end the game and take home the win.

“I think this is one of the best games we played all season, it was good to see what we can do under so much pressure,” said Cairo Harrell. “Whatever we had here we need to keep it going, for us to play as a team and keep our confidence in each other.”

The Brahmas next playoff game will be Saturday, November 25 at Pierce College, hosting San Diego City College, who upset No. 4 seed Cypress College Tuesday night. Time is to be determined.