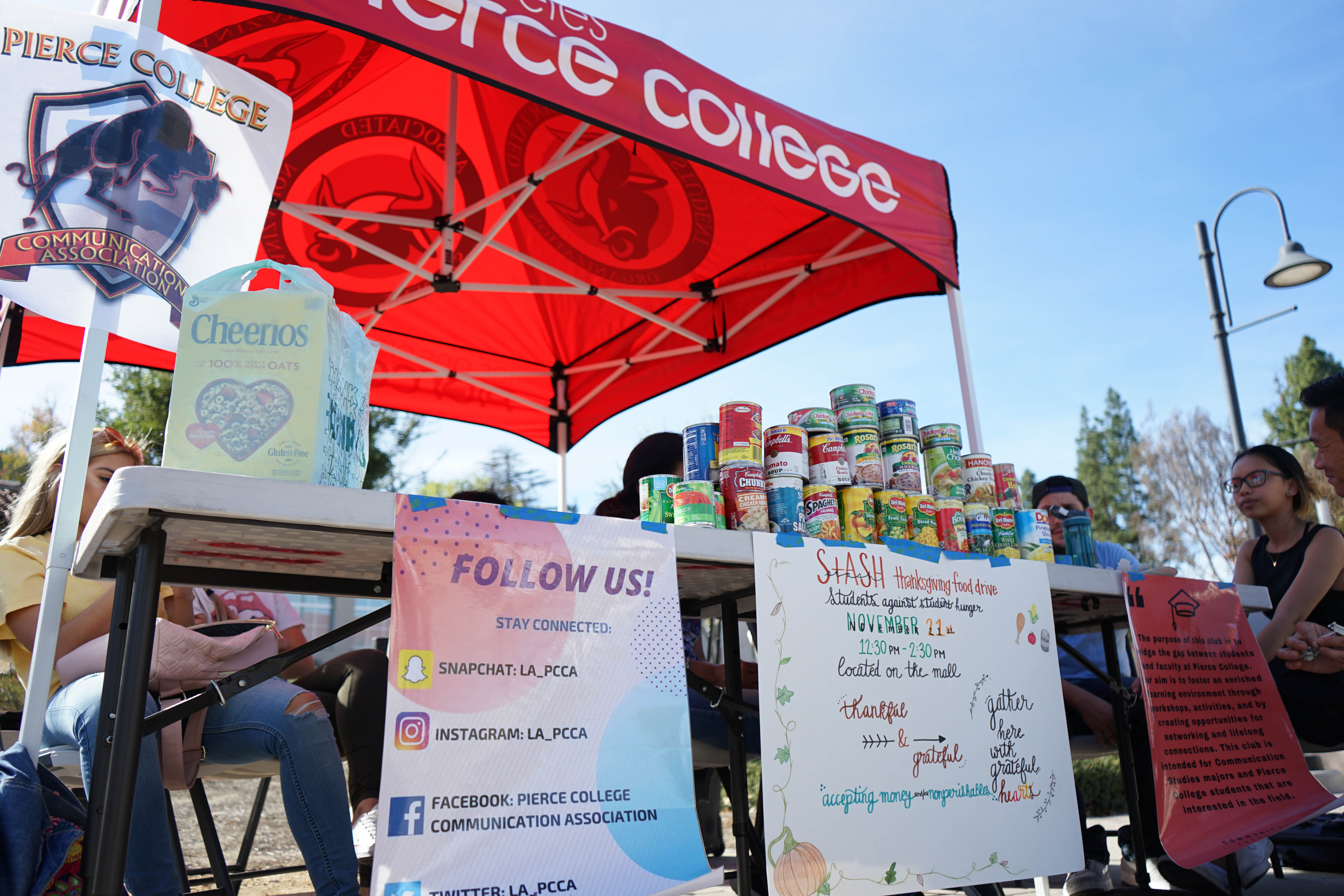 All Pierce clubs have a unique purpose on campus. These few combine their efforts to help struggling students in need.

The Communication Association hosted a canned food drive on the Mall on Tuesday, Nov. 2. They collaborated with Students Against Student Hunger (St.A.S.H) and donations were given to the food pantry.

Besides canned food and essentials, they were also collecting monetary donations.

Communication Association advisor and assistant professor Robert Loy organized this event for his students to interact with other club members. Loy said this was a collaboration between him and communications instructor Yeprem Davoodian.

“What we do is try to encourage our students to get involved and form a small group and develop and organize an event,” Loy said.

Loy said his students have been working on this assignment all semester, creating posters and figuring out what they want to do.

“My group is realizing that there are a lot of loopholes and logistics when it comes to developing an event. Organizing and communicating with other people, especially, when you have a small group and many people.”

Loy said he wanted the Communication Association to collaborate with another group on campus. That’s when he said they chose to work with St.A.S.H.

“They have a sense of comradery. They feel a part of part of something, and that belongingness,” Loy said. “That doesn’t happen with every group.”

Rachel Razon, a communications major, said the event was a collaboration with other communication classes and clubs on campus.

Razon said they collaborated with other communication classes as part of their last assignment.

Razon said they wanted to help others for Thanksgiving, so they decided to take action locally before the holidays.

“Originally, we were going to donate to a charity or a local church,” Razon said. “I thought it was a great idea to work with a club and donate to something like St.A.S.H.”

After doing research for the project, Razon said learning about the statistics was an eye opener.

“Loy said about 17 percent of college students just within the United States are homeless, or don’t have a roof over their head, which gives them less access to food, which is a reason why we decided on this,” Razon said.

Volunteer Maria Collazo was encouraging students to donate at the booth and said they received many donations. She said they were able to raise $45 that day.

“We weren’t even aware that there were cases that students were coming to school hungry. It’s good to know that they have a food pantry, and we are able to help at least before Thanksgiving,” Collazo said. “It’s nice helping students as a student.”

Loy said these issues need to be addressed among college students.

“We need to solve food insecurity and hunger, especially among college students,” Loy said. “But also, we wanted to collaborate with a club that’s already doing so.”