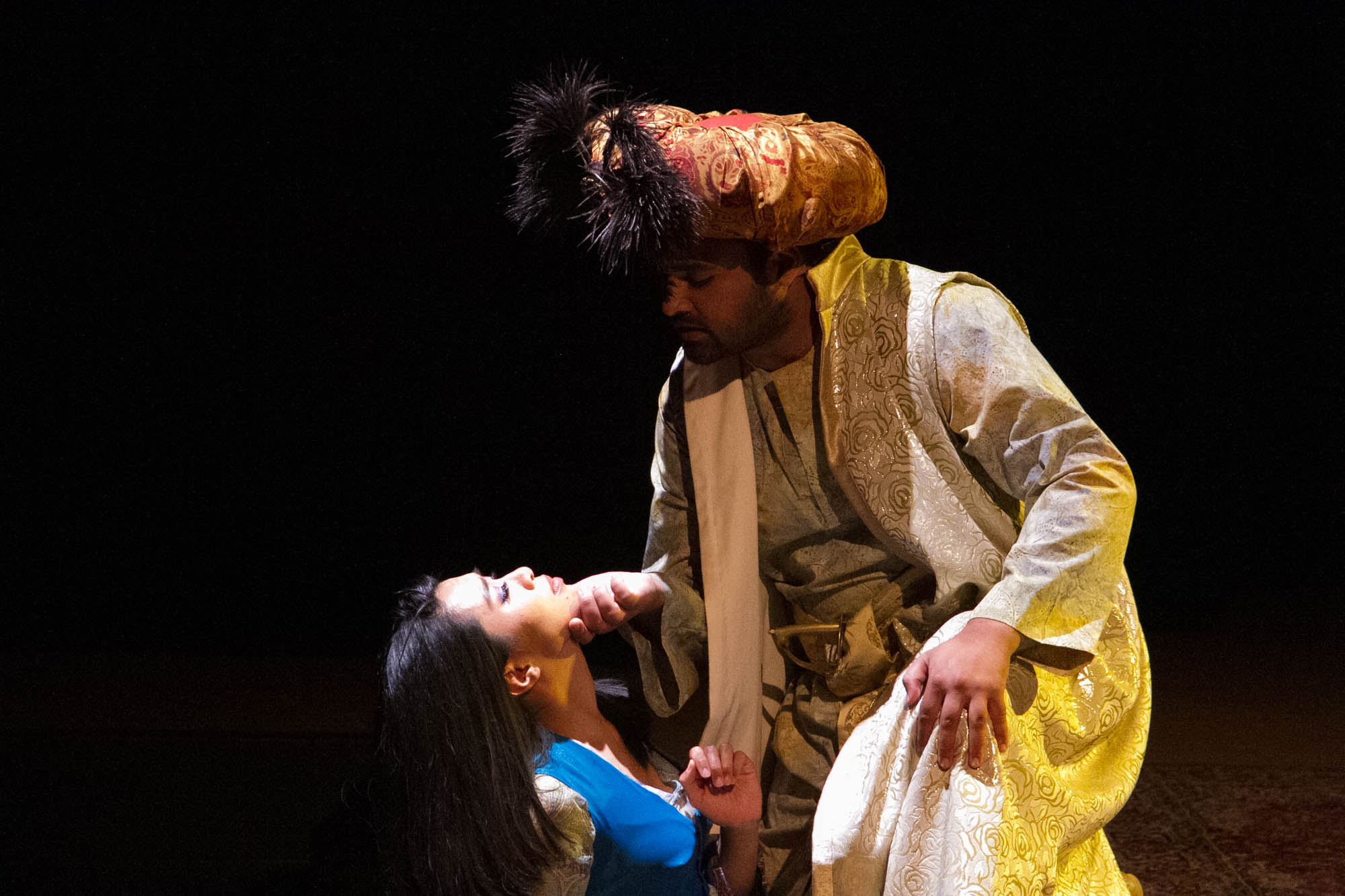 There are many ways to tell a story, and Arabian Nights has many stories to tell. At the heart of it is a mad-king regaining his humanity, falling in love with our storyteller Sheherezade (Sharai Bravo) as she spins tales of fancy night after night to keep her life.

Unfortunately, the over-the-top comedic tone of much of the show falls flat and can feel excessive, taking away from the rich storytelling that should be. At times, the show can feel targeted towards a more juvenile audience, with fart jokes and parts that feel chocked full of the scene breaking style that happens in cartoons. And while the dance choreography is appealing at first, it falls flat throughout.

Visually, the production excels. Set design and costumes are wonderfully done. Little details, such as the thin gold line at the edge of the horizon in the background, make everything pop. With no set changes, the audience can truly get lost staring out across the dunes of the background.

Sheherezade draws the audience in with her storytelling just as she does King Shahryar (Asif Baig). Before she even begins with her tales, the fear on her face when first meeting Shahryar is unmistakable and speaks volumes.

Often times, the storytelling is layered, with a character in Sheherezade’s stories telling their own story. The first example of this is in the story of the Madman (Nickolas Caisse), who recounts the events that led to him being locked up in a madhouse. During the story, Madman speaks with Skeikh (Darnel Young), who leaps around the stage, confusing Madman with his movement and words. The choreography between the two is well thought out and adds a spark to the scene as it begins to fall off.

This is also the first example of the over-the-top comedic style used, but coming from an asylum inmate it seems fitting, but, as the play evolves and more stories are told, the slapstick and caricature can start to wear on the audience.

The comedy is not just presented through dialog and motion. One story features a song about flatulence after Abu al-Hassan (Robert Johnson) passes gas while meeting a prospective bride.

Not every story relies heavily on comedy. The most touching of the stories is that of Azia (Darnel Young) and Azizah (Alliyah Ferrera), two cousins who grow up together and love each other, but Azia pursues another woman, at the behest of Azizah.

While much of the cast if young and inexperienced, most of the production’s issues come from the script that is now 25 years old. First performed one month prior to the release of Disney’s Aladdin, a familiar character from the source material The Book of One Thousand Nights and One Night, who is left out of Arabian Nights, along with Ali Baba and Sinbad. Comedy is one of the more difficult acting disciplines, and as the cast grows more comfortable on stage the show could certainly improve with some of the caricature turned down.